Look At The Shattered Remains Of The ESA’s ExoMars Lander 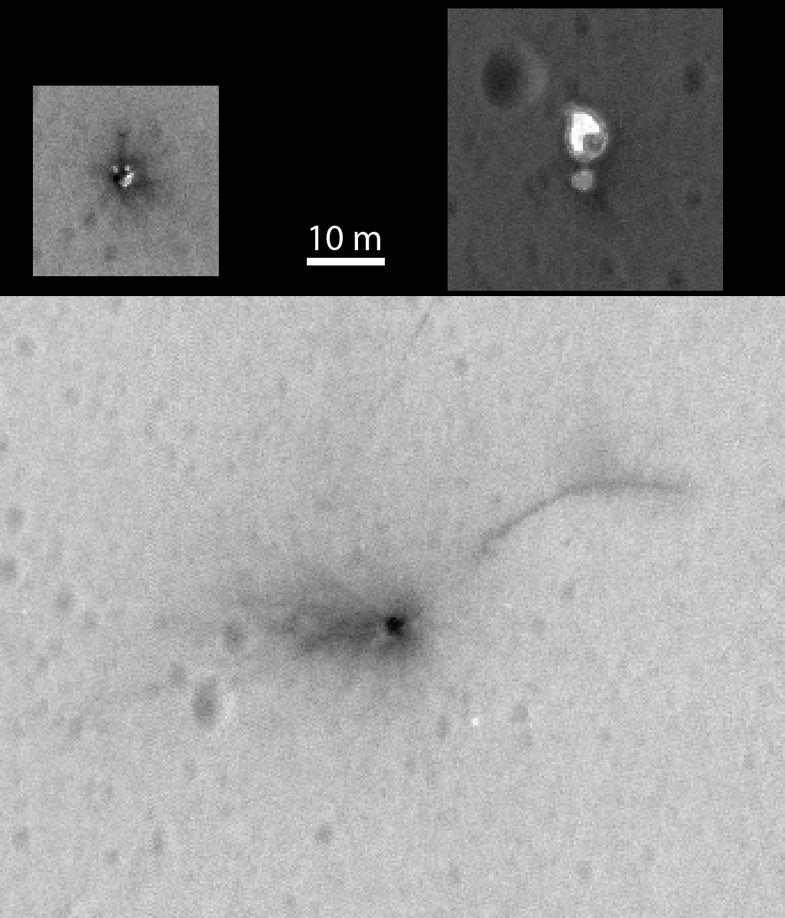 Earlier this month, the European Space Agency failed to guide its ExoMars lander successfully to Mars' surface. Now we can see exactly what the extent of the damage looks like, thanks to images like the one above, taken by NASA's High Resolution Imaging Science Experiment (HiRISE). NASA/JPL/University of Arizona
SHARE

It’s incredibly hard to reach Mars: More than half of the missions to the red planet have failed, including the most recent one. The European Space Agency’s attempt to put a rover on Mars earlier this month had a harder landing than many. After a few days without contact from the lander, a NASA satellite orbiting Mars spotted what appeared to be an explosion in the landing zone. Now we have even better photographic evidence.

Today, the University of Arizona released pictures from another one of NASA’s Mars satellites, the High Resolution Imaging Science Experiment (HiRISE). The images show further details of the Mars Lander’s crash site. The bright spot in the lower-left of the photo, according to the press release, is the backshell of the lander and the parachute. The bright spots jutting out from the center of the circle in the upper-right could be parts of the heat shield. And the dark circle about 8 feet across, visible in the upper-left, is likely a shallow crater that would match an impact of an object the size and speed of the ExoMars lander.

On a future orbit, HiRISE might be able to capture color images of the crash. Photos of downed missions like this one can help researchers learn from the damage and avoid similar mistakes on future trips to Mars. And we’re getting better and better at taking them.

Finding evidence of the crash within weeks is a testament to the infrastructure already around Mars, and how much better equipped humans are to see happenings on the surface. The Soviet Union’s Mars 3 lander was the first to communicate from the planet’s surface, but only transmitted information for just shy of 15 seconds. It wasn’t until late in 2012 that space enthusiasts, pouring over five-year-old images from the HiRISE camera, identified what looked like the remains of Mars 3.

Now, when an object crashes on Mars, scientists can find it in days, not decades. Still, the best bet for finding something on Mars is making sure it works when it lands—and when it comes to the red planet, the best track record belongs to the red, white, and blue.