Why some bees and wasps are more likely to sting you

Not all bees and wasps can sting. 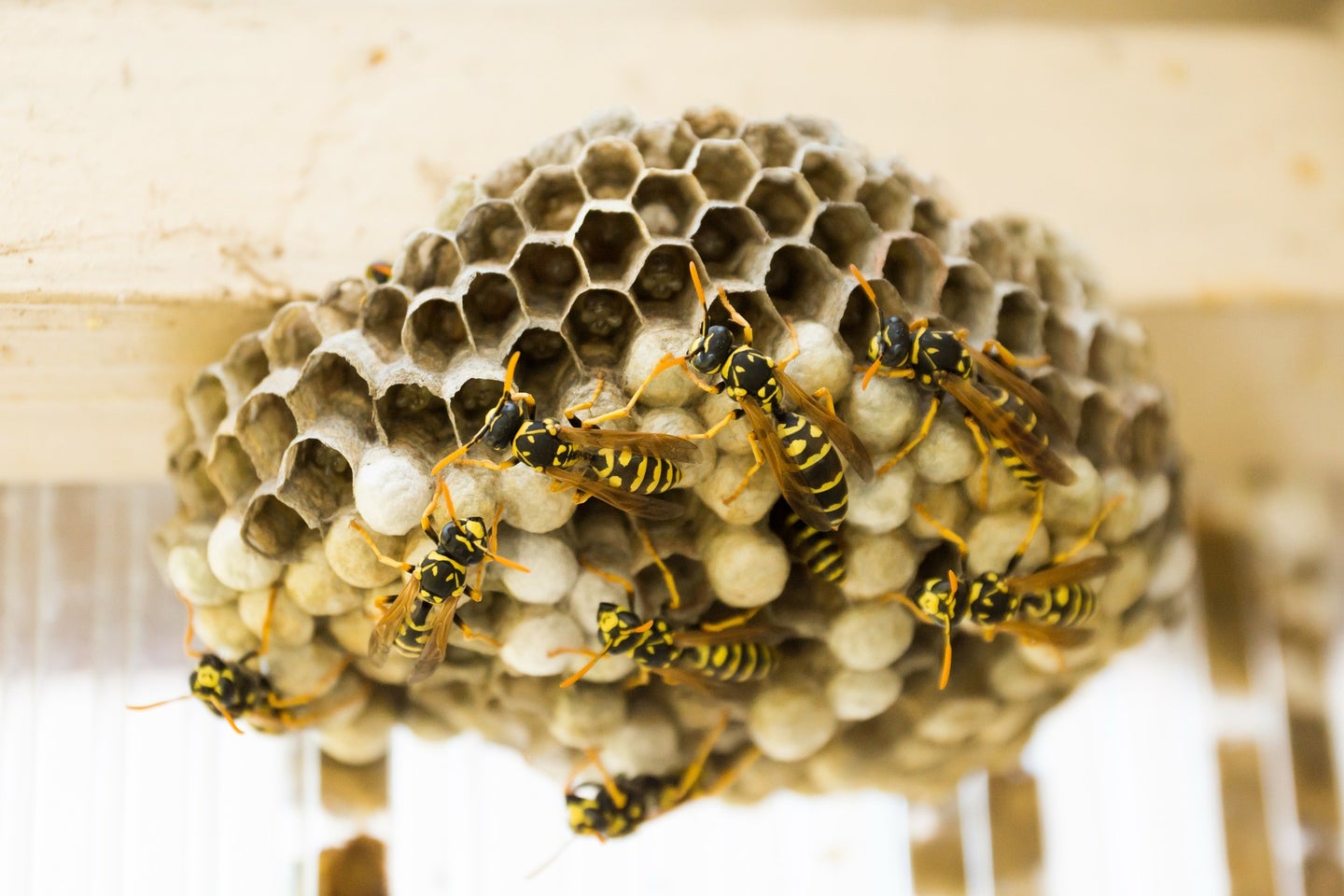 Social wasps, like the ones pictured here constructing a nest, are much more likely to sting than solitary nesting bees and wasps. Thomas Mühl
SHARE

It might seem like every flying insect in your garden is out to sting you, but the reality is much less terrifying.

There is a huge diversity of bees and wasps out there—all fall under the scientific order of Hymenoptera, which also includes ants and the less familiar sawflies. Bees are technically one subgroup of the diversity of wasps (in a square/rectangle sort of way).

Within this dizzying array of insects, it’s true that lots of them can’t sting—but it’s probably not the ones that you think. And among those that can sting, only a small minority are responsible for the bulk of human stinging encounters.

What is an insect sting?

Among the bees and wasps that can sting, venom is a unifier. “They all have venom, but the compositions are wildly different,” says Emily Sadler, an entomologist at Utah State University who studies stingers. When a bee or wasp stings, it’s not just the physical poke causing the pain. In fact, in a 2018 study, Sadler found no relationship between an insect’s stinger size and the pain associated with the sting. She also found an inverse relationship between stinger length and venom toxicity—the shorter the stinger, the more toxic the venom.

Stinging Hymenoptera make and store their venom in glands in their abdomens. If you’ve ever been stung by a honey bee, you may have seen this venom sac left behind with the stinger, like a little flag on a pole. When a honey bee loses its stinger, the venom sac stays attached for up to 10 minutes, continuing to pump more venom into a sting site until it dries up.

Landing a sting on animals with thick fur or feathers is tough, notes Justin O. Schmidt, an entomologist at the Southwest Biological Institute in Tucson, Arizona who studies stinging hymenoptera (in part by experiencing their stings firsthand!) and is author of the book The Sting of the Wild. Getting in as much venom as possible with every sting boosts the chances of successful defense. In addition, an abandoned honey bee stinger gives off a scent that can help direct other bees to the same vulnerable spot. Schmidt describes the smell as “a cross between fingernail polish and a ripe banana.”

Only female Hymenoptera of any species are capable of stinging. That’s because stingers are modified ovipositors, the organ used to lay eggs. In lieu of stingers, male bees and wasps have their own, sex-specific, non-venemous genitalia.

Many species of bees and wasps also don’t have useable stingers to begin with, male or female

There are hundreds of species of stingless bees, or Meliponini, living in tropical or subtropical areas of the world. Meliponini have very reduced stingers that can’t be used defensively. To make up for it, they have other tactics: they can bite, and they do—hard! Meliponini have powerful mandibles and their bites pack a punch.

[Related: Wasps are the new bees]

Aside from Meliponini, there are some other solitary bees, like miner bees, that also have very reduced stingers, but for the most part the bee species you probably encounter in daily life are capable of stinging.

Most wasp species, on the other hand, can’t sting. Wasps fall broadly into two categories: stingers and parasitic. Parasitic (or parasitoid) wasps rely on host organisms to complete their life cycle, and in the process usually kill their hosts. These are wasps whose ovipositors are modified to deposit eggs inside living plants, insects, or other organisms. Once inside a host, the wasp eggs hatch and the larvae devour their host organism from the inside out. These parasitic wasps don’t stick their ovipositors in humans, with very few exceptions (absolutely none parasitize humans), and many are so small you could confuse them with gnats.

Most Hymenoptera fall into this parasitic group, says Schmidt. So technically most wasps aren’t a stinging threat to us.

Ichneumonid wasps are one type of parasitic wasp. They may look scary, with their long ovipositors, but they’re only a real nightmare if you’re a host organism (which, again, humans aren’t).

Which insects are most likely to sting you?

Honey bees, yellow jackets, and paper wasps are the most common bee and wasp sting offenders in the US by far, says Schmidt. “The reason that they’re so effective at stinging is because they have a nest, and a nest can’t run,” he adds.

But even social bees and wasps foraging far from their nests are unlikely to put their lives on the line when fleeing danger is an easier option. Stinging as defense costs energy. It’s time away from foraging or hunting, says Sadler, “and then venom, right? They use venom that they’d then have to produce [again].”

Beyond just the energetic costs, stinging can also cost bees and wasps their lives. “If they go and sting something, there’s a chance of a fight, and they could die,” Sadler explains. An animal stung is liable to swat in response, and crush the offending bee or wasp. And, for a subset of stingers, death isn’t just a risk, but a guarantee.

[Related: How to Avoid Being Stung By a Wasp]

Honey bees’ stingers get stuck in their victim’s flesh on backwards barbs, and pull out of the insect’s body, ultimately killing it. And honey bees aren’t alone. “Most people think a wasp can’t lose a stinger,” says Schmidt, but he explains that there are multiple groups of social wasps in the tropics that do.  It may seem counterintuitive that any animal would use a defensive tactic likely to lead to its own death, but for social bees and wasps, the motivation is clear: protect the hive.

Social hymenoptera live in a group of their sisters—all the bees or wasps in a colony are very closely related. To defend their siblings, queen/mother, and genetic line, some Hymenoptera give it all. The likelihood of this suicidal tendency increases with the size of a colony, says Schmidt. Bees and wasps that live in very large groups, like honey bees, have less to lose and more to protect by stinging.

Which flying insects can sting, but probably won’t?

Non-social, or solitary, bees and wasps are often still capable of stinging, but unless you pose a direct physical threat (i.e. picking an insect up, stepping on it, repeatedly swatting) they have no reason to sting you.

In fact, Schmidt—who’s made it part of his life’s work to experience all the different stings out there—has had to try hard in some cases. It took him three or four attempts at  manhandling a mud dauber wasp before it would successfully sting him. “You have to be pretty talented to manage to do it,” he says.

Solitary bees and wasps usually have multiple small nests where they leave their young without much ongoing parental care. Their genetic line dies with them as individuals, and so they are much more risk-averse when it comes to deploying stings. Solitary bees and wasps aren’t even particularly likely to sting to defend their own nests, says Schmidt. If their nest is threatened, they’d sooner lay new eggs in a new nest than die to protect replaceable young.

Many bees and wasps that look scary are actually very unlikely to cause you harm, and act as valuable pollinators or pest control. For example, rambunctious male carpenter bees (fat like bumble bees, but shiny and black) will wrestle each other for territory while airborne, often getting within inches of surrounding humans. But these males are certainly not interested in you and are incapable of stinging.

Others, like spider wasps, cicada killers, and mud daubers, look intimidating, but are very unlikely to sting, Schmidt says. 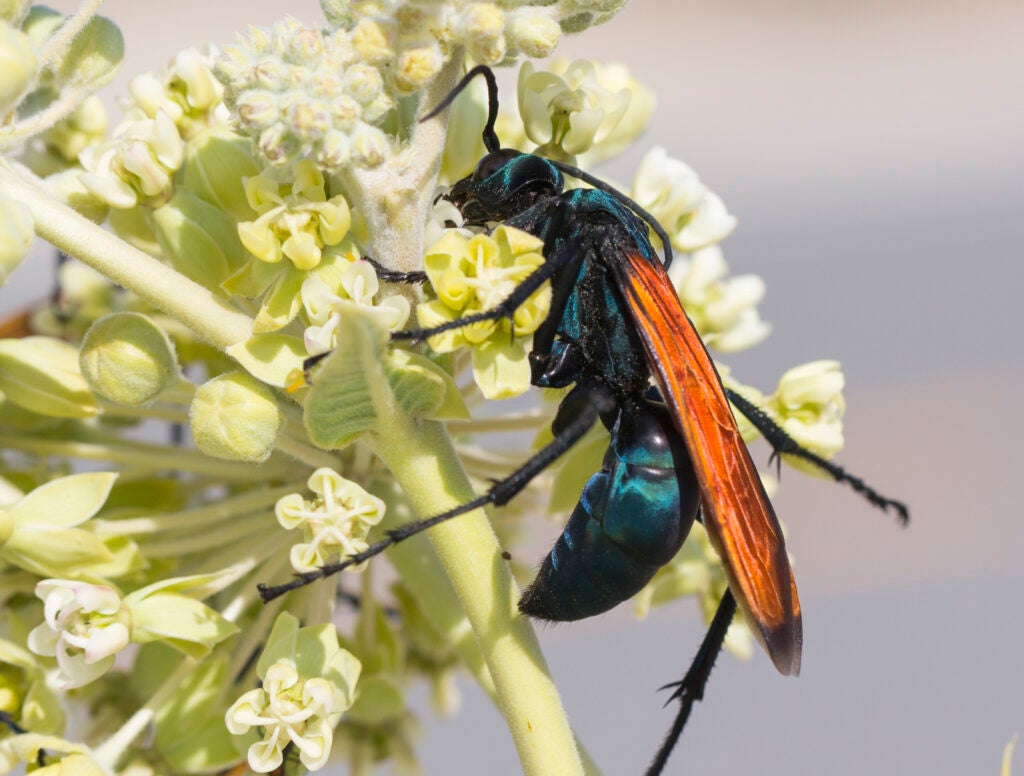 A tarantula hawk, a species of spider wasp, feeding on milkweed in Joshua Tree National Park. Spider wasps have shiny, dark bodies and reddish wings. They are large and scary looking, but very unlikely to pose a threat to humans. 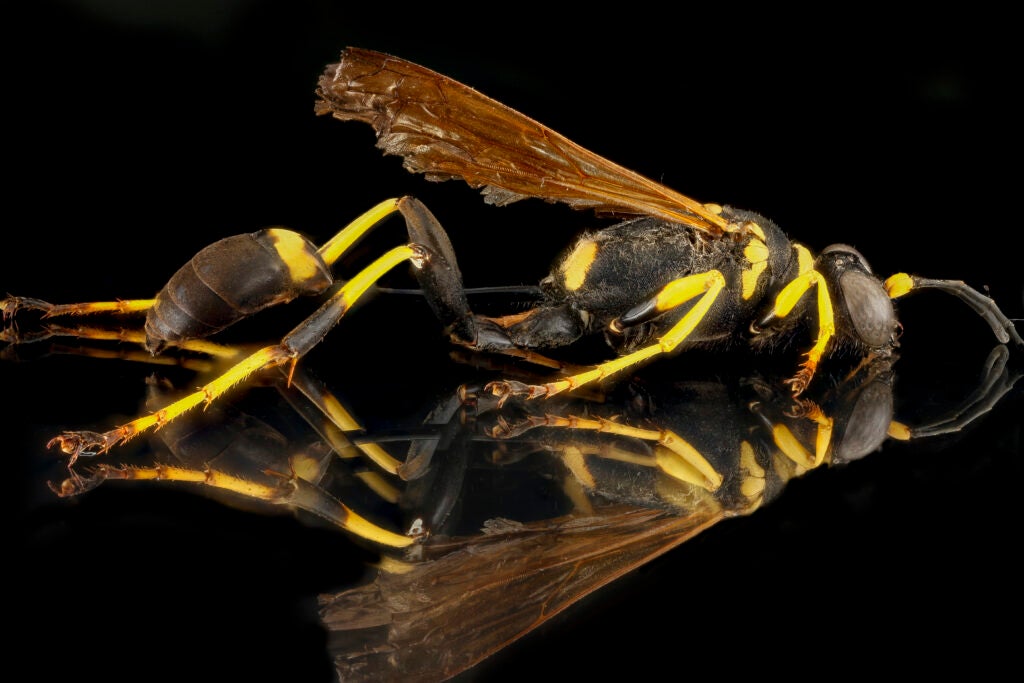 Mud dauber wasps can be large and brightly colored. Schmidt describes them as “otherworldly” because of their long, thin waists. As strange as they seem though, they come in peace. 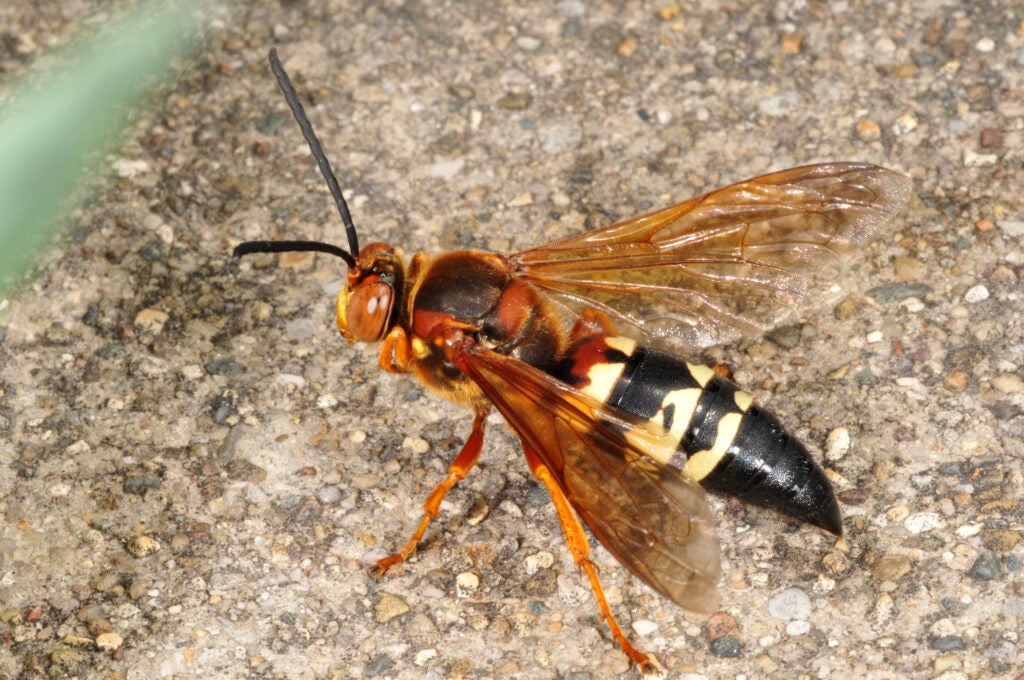 Cicada killers look like “yellow jackets on steroids,” says Schmidt. So, many people fear they’ll be just as defensive. Fortunately, these beefy wasps are solitary and save their stings for their prey.

Schmidt often watches the tarantula hawks, a particularly large species of spider wasp, fly around his yard as they forage around milkweed. “They’ll get within six or eight inches of me as they’re flying around, and they don’t pay attention to me and I don’t pay attention to them. Everybody’s happy and we’re all having a good time.”