If you’re a prawn, it pays to not go boldly where no one has gone before. 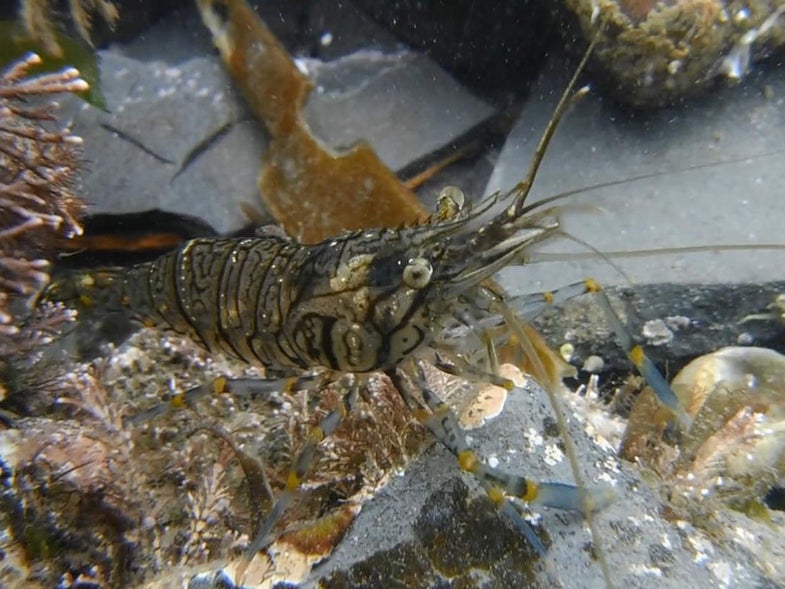 When it comes to survival, you might think that creatures who boldly seek new resources and new habitats stand the best chance. For some animals, that’s true. But for others, staying put produces better results. A new study from the University of Exeter on shyness in rockpool prawns shows just that. Published in the journal Animal Behaviour, the paper demonstrates an odd-sounding finding—boldest isn’t always best.

The researchers studied rockpool prawns captured from an English beach, creating an artificial tidepool-like environment in the lab to simulate the intertidal zone the prawns normally occupy. They tagged each prawn and tracked it through the trial period to see how its behavior correlated with its weight gain and overall success in getting food at feeding time. They found that some of the prawns were shy, meaning they spent less time exploring for food and stayed near existing food sources longer, while others were bold, marauding around looking for their next meal. These traits showed up again and again in their observations, with some unexpected results, Daniel Maskrey, the lead author of the paper says—the shyer prawns gained more weight than the bold prawns, because they spent more time eating existing food sources rather than seeking out new ones.

Shy in this case doesn’t mean timorous. The homebody prawns, which gained more weight, were also stronger and better fighters than their more adventurous compatriots, a fact that many people find counterintuitive.

“Intuitively, you would think that individuals that take more risks, are maybe bolder in the way they live their lives, should be at an advantage when competing with other individuals for resources” says Maskrey, who is now affiliated with the University of Liverpool. But stop and think for a second, he says, and the study finding starts to make some sense. The weak prawns can’t stay close to home for their resources, since they get beaten up by the stronger prawns. So they have to go farther afield and take bigger risks.

Why does prawn personality matter, you ask? Rockpool prawns, which are commercially fished in England and elsewhere, stand a better chance of surviving as a species because different individuals within the species have different tactics. Prawns that station themselves near food are able to reproduce easily under normal conditions, but when conditions change–say, when a section of beach gets moved around by a storm–the more adventurous prawns get their chance to shine, finding new resources and surviving even as their shyer companions perish.

That’s particularly important in commercially fished species, says Maskrey, “because we’re already putting them under a lot of pressure by virtue of fishing them and eating them in the first place.” Not to mention, he adds, the double whammy of anthropogenic changes to their environment such as climate change and habitat encroachment. All those stresses put their populations under pressure, giving researchers like Maskrey a host of reasons to understand how prawns live and interact. The more accurately they understand the prawns’ behavior, the better they can make conservation suggestions. But these findings have bigger promise: Maskrey says that this shy/bold dynamic may be true across many tidepool-dwelling species. It could be the underlying thing that motivates a lot of behavior in tidal pools and shapes the tidal pool ecosystems. More study will be needed to identify if other species do the same thing.

And there’s evidence that the prawn isn’t the only one. Mark Briffa of the University of Plymouth co-authored a 2014 study on aggression behaviors in hermit crabs that had parallel results. This new study in rockpool prawn boldness shows that “the pattern of shyer animals being better fighters could be much more general across a range of animal species,” Briffa said in an email interview with Popular Science.

This is particularly true in environments like tidepools, where the only constant is change, says Maskrey. These results about shyness are part of something that’s only just beginning to be studied, and there could be many other species in these environments that have the same correlation between shyness and success.

Of course, this doesn’t mean that we should start assuming tidepools are like something out of Finding Nemo, Maskrey cautions. The ‘personalities’ of these prawns are very real, but they’re not as well-defined as Jacques the shrimp or his human creators.”It’s not like a cognitive process,” he says—in other words, the prawns and hermit crabs aren’t actually thinking about which action to take in the same terms a human would. “It’s just that different individuals behave differently consistently.”