Mystery meat: scientists are investigating the roadkill we never get to see 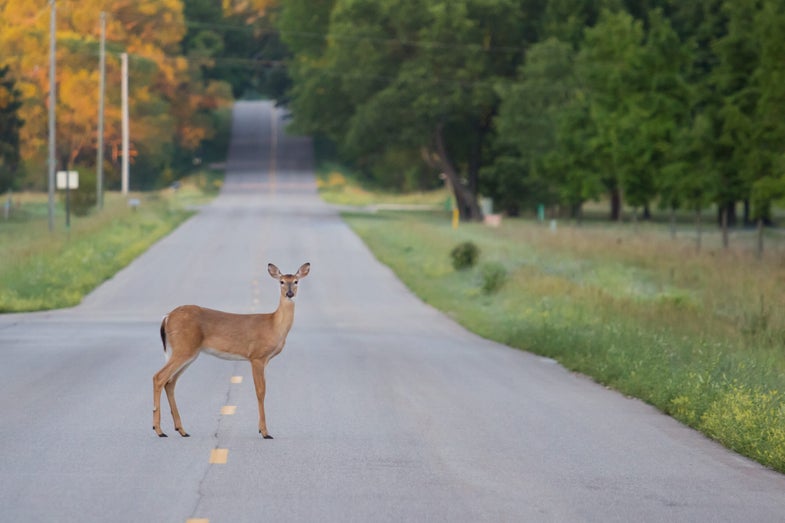 That flattened raccoon or broken reptile might just be something to drive past for motorists, but for scavenging animals, it’s breakfast. A new study published today in the Journal of Urban Ecology is the first to look at the role of these scavengers in performing roadkill removal—and its results call into question whether we’re even counting roadkill right.

In the study, scientists from the University of Cardiff in Wales set up camera traps equipped with chicken heads at twelve sites around Cardiff. When an animal came to scavenge the “roadkill,” the camera photographed it, documenting time, type of scavenger, and location. Although scientists have studied roadkill in numerous ways, this is the first time they’ve used camera traps to capture the identity of scavengers.

And the results were unexpected: “We were quite surprised when we put down our fake roadkill how quickly it was removed,” says ecologist Sarah Perkins, one of the study authors. In 62 percent of cases, scavengers—from corvids like ravens and magpies to household cats and dogs—came by within two hours to collect and devour the chicken heads in question.

Perkins is the coordinator of Project Splatter, a United Kingdom-wide citizen science initiative run out of the University of Cardiff that has members of the public act as field researchers, finding and cataloguing local roadkill. Laypeople use social media, a form on the project website, or a smartphone app to record roadkill, while the researchers use GIS technology to produce an interactive map of the resulting data points. This study provides new context about the roadkill that members of the public aren’t recording and observing, since it’s already in the belly of another beast.

“Removal of animals by scavengers is believed to be the most important factor causing underestimations of roadkill numbers, particularly of small animals such as garden birds and rodents,” lead author Amy Williams Schwartz said in a press release.

The researchers found that corvids are the most common scavengers, while small rodents took nibbles out of the chicken heads but didn’t commandeer the whole thing. They also found that time of day mattered: camera traps baited in the early morning were most likely to record quick scavenging.

This kind of research “is not just an academic exercise,” says University of California at Davis ecologist Fraser Shilling. It’s about understanding the real movements of animals, he says, and has implications for conservation as well as road safety. Shilling, who was not involved in the University of Cardiff study, is co-director of the UC Davis Road Ecology Center, which studies the ecology of roads and roadkill in a North American context.

While the study’s results are unique to Cardiff, they point to a more general pattern that has yet to be explored, she says: “We know that elsewhere there is lots of wildlife roadkill, so that is a potential resource for lots of scavenging species.” Shilling works on the less-colorfully named Californian Roadkill Observation System, another citizen science initiative. Among other things, the CROS is specifically looking for roadkill “hotspots” where infrastructure changes might result in fewer deaths.

To date Shilling’s lab hasn’t employed camera traps to figure out what kind of scavengers might be making off with the flattened animals. That piece is a “nice addition” in the Cardiff study, he says: it provides new evidence about the rate of loss for roadkill as well as offers information about scavenging species.

Those species, like gulls and, in the United Kingdom, foxes, might be considered nuisances, but Perkins says knowing about their role as roadkill cleanup points to their positive place in urban ecosystems: they’re the cleanup crew. Without them, life might be much stinkier.