Mosquitoes learn not to mess with you when you swat them

And they’ll likely go looking for a less combative meal. 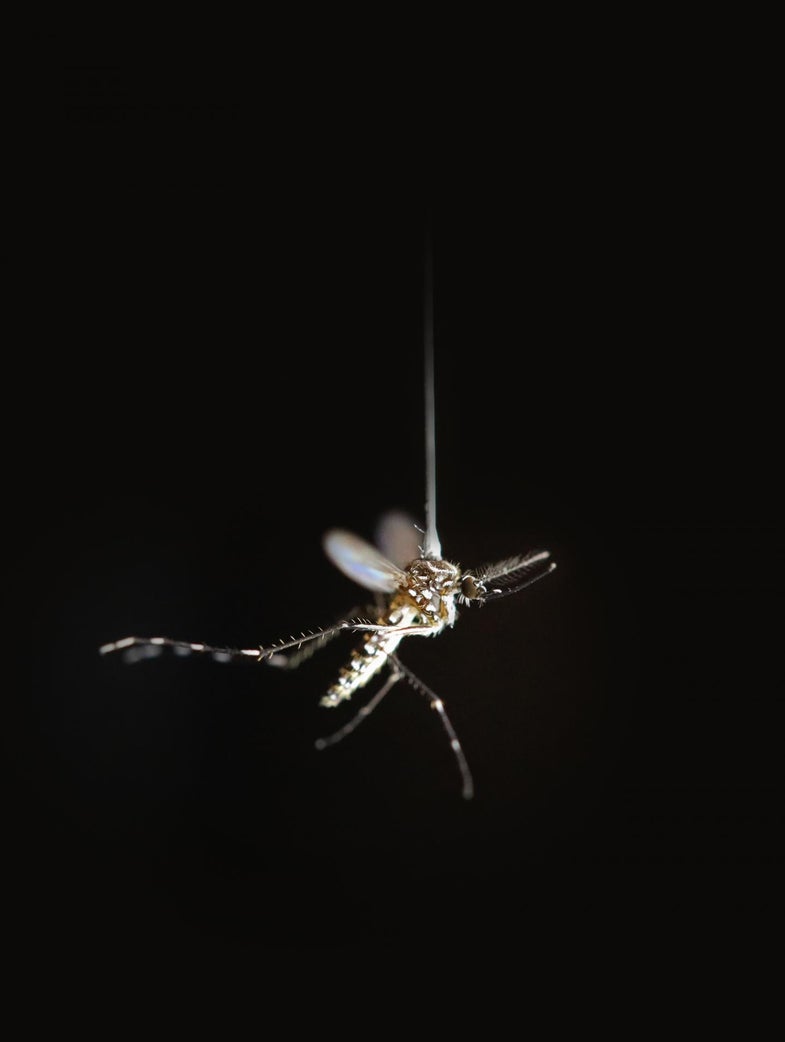 The heat of your body, the vapor of your sweat, the breeze of your breath, and your scent, oh, your scent! The combination is beyond enticing, drawing in a mosquito with the promise of a quick bite.

Not today mosquito. Not today.

The jarring vibrations of a slap may be enough to put the mosquito off your alluring aroma, even if your efforts didn’t manage to mash the insect to a bloody pulp.

To test how well these pesky bugs can remember a turbulent experience—and the scent associated with that—researchers put insects through tests involving tiny flight simulators, mini wind tunnels, and the odor of humans, rats, and chickens. Their results, published in this week’s Current Biology, found that mosquitoes were capable of remembering defensive individuals for at least a day, and avoiding them like the plague, (or, in their case, avoiding them like DEET).

“The entire mosquito has evolved to identify us and to bite us. They are especially sensitive to temperature, to the water vapor from our sweat, to our body odor, and to the carbon dioxide from our breath, so their entire sensory systems are geared towards locating us,” says Jeffery Riffell, lead author of the paper.

If kept from their preferred food choice, these mosquitoes will make do with blood from cattle or dogs to sustain themselves. But that’s only if they have to. In other experiments, Riffell says, researchers showed that even mosquitoes that only had access to dogs or cattle for most of their adult lives would gravitate back to humans if given the chance.

“Their ability to shift hosts hasn’t lost that innate preference for humans. And so we think learning is causing that shift and that flexibility,” Riffell says. He and his colleagues wanted to look into what drove the preferences for hosts, and if mosquitoes might learn to avoid certain humans that proved too challenging.

“We all have our own scent signature—a fingerprint, if you will,” Riffell says. “And this fingerprint is stable, it doesn’t change very much over the course of weeks or months. Mosquitoes, once they are actually biting you, they are smelling you. If you try to move your arm to shake them off or try to swat them, they will feel the vibrations of the swat and learn a negative association between those vibrations and your scent. Given that we each have our own scent fingerprint, we found that they can actually remember certain individuals.”

In other words, the bugs could learn to avoid the scent of a swatty human. They replicated an annoyed human with an experiment baited with thin nylon socks worn by undergrads to get them nice and smelly (to mosquitoes, anyway. The scent was too faint for a human nose.)

“What was interesting about this was the individuals that they remembered the most were the ones that were highly attractive,” Riffell says.

He’s not talking about physical attractiveness. You probably have friends who remind the world of their mosquito-attracting abilities, saying, ’oh, mosquitoes just love me’ constantly during the buggy months of the year. They might not be exaggerating.

Riffell says that in this case, the mosquitoes reacted most strongly to scents they previously used to gravitate toward the most. It makes sense if you think about it. What if you loved donuts, and just as you were about to take a big ‘ol bite out of a chocolate glazed, it suddenly tried to stab you to death?

Now picture if another food tried the same thing. Say, maybe celery. Celery tries to bludgeon you while you’re dutifully snacking on the bitter wet threads masquerading as food. Feels different, right? The donut’s betrayal hurts more, because you really loved that donut, while you always kind of suspected that celery was out to get you.

“They avoided certain odors as strongly as if they were experiencing 40-percent DEET,” Riffell says. “They can really remember the odor, and it can cause a high degree of repellency in them.”

Riffell and his colleagues figured this out by gluing live mosquitoes to a thin insect pin that acted like a tether, keeping the bug in place while it tried to fly toward or away from scents. “It’s like virtual reality for the mosquitoes. It’s a great way to test their behavior and see what they’re learning,” Riffell says.

Once in the flight simulator, the mosquitoes got whiffs of a particular scent—like the ones gathered from the volunteers beforehand—as they were buffeted by turbulent air and vibrations meant to resemble the aftermath of a swat.

“Then we also fly them in these little mini wind tunnels. They have a choice between the previous odor and a clean odor control, so they can choose what direction they want to go,” Riffell says.

Computer software and cameras helped analyze how the mosquitoes would have flown toward or away from scents if they had been free of the pin.

Then they took it one step further. “We can glue them to a holder where they’re tethered in place, but flying, then we can cut this tiny little window in their head and record how the neurons in their olfactory system change as the animal is learning. We can also see how certain chemicals that are involved with memory and learning influence that processing of odor information,” Riffell says.

In mosquito brains, they found, dopamine is critical to the insect’s ability to learn, and helps motivate it to remember positive and negative associations—like being attacked by their food.

The researchers are still doing experiments to expand on this study, and are currently working to isolate which odors among the 300 or so compounds that go into a human scent are particularly alluring to mosquitoes. They’re also trying to figure out whether the protection accrued by one swat-happy human might extend to their neighbors, and how long a mosquito’s memory of a bad experience lasts. This study tested scent memories after just 24 hours, but mosquitoes live for about a month. So it’s possible that they might learn from their experiences for a lot longer than a single day.

“What we’re finding in general is that these mosquitoes evolved to be really effective biters of humans and disease vectors,” Riffell says. “Their learning ability causes this adaptiveness that make them even more effective at sticking around and biting people. It’s a difficult control problem in terms of eradicating these guys.”

There isn’t a perfect way to swat at a mosquito to keep it and its companions away from you forever, though the researchers hope that by understanding how mosquitoes choose who to bite, they might be able to cut off their blood supply in the future. In the meantime, if a single mosquito learns to avoid you, it might just pivot to your friend or pet as an alternative dish.

So instead of relying on a stray swing of the hand to save you, think of your friends: don’t miss.