It's so easy being green that these lizards kept evolving the same weird quirk. 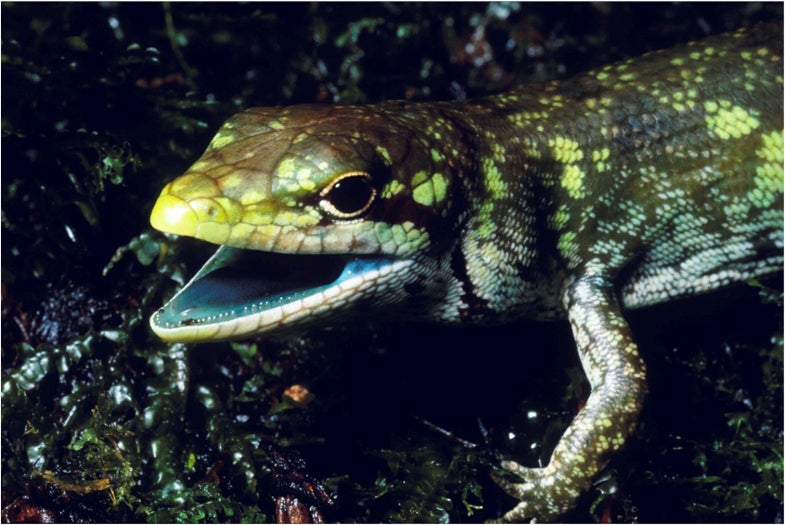 In the forests of New Guinea, lizards scurry around with green bones, green hearts, green tongues, and green blood. At least six species share this enigmatic trait, which didn’t originate from one bizarre mutation but evolved four different times, according to new research in Science Advances.

These lizards have green insides because their bile carries super high levels of a deadly compound called biliverdin, the product of old red blood cells. People make the same pigment—you can see it when you get a gnarly, green-tinged bruise—but our livers filter it from our blood. Trace amounts of biliverdin cause jaundice, a disease common in infants and adults with liver failure. The levels found in these lizards would kill us. But for these lizards, well, it sure is easy being green.

“It’s possible there is no adaptive value,” says biologist Christopher Austin at Louisiana State University, “but it’s hard to imagine.” Over the course of 27 years, Austin, one of the authors of the study, has traveled to New Guinea in search of the bright green creatures. He’s captured hundreds of lizards by clamoring up trees and grabbing the critters. In his fieldwork, he discovered two new species, but he’s sure there are more. “New Guinea is like this black hole for biological discovery,” Austin says. “There’s no field guide.”

Austin’s effort to understand the lizards’ evolutionary history might explain why the heck toxic green blood would evolve in the New Guinea lizards more than once. One theory is that biliverdin could help fight off blood parasites, like malaria or blood-born worms, says Susan Perkins, a parasitologist at the American Museum of Natural History, another of the study’s authors.

Figuring out how these lizards survive with green blood—and how it evolved—might help us understand how to treat humans with high levels of biliverdin. “I don’t think that will be a magic bullet to treat jaundice,” says Perkins, “but it helps.”