The next generation of farmers use a smorgasbord of tools to get the job done. 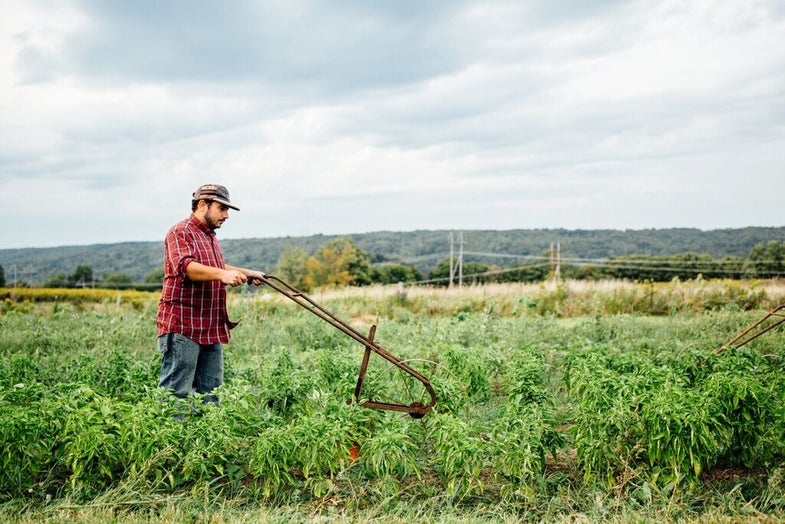 Farmers don't discriminate when it comes to the newness of their tools. If it works, it works. Stan Horaczek
SHARE

Before Leo Sanchez will talk about his farm, he has to ask: “Do you like the website?” The owner of Lazy Millennial Farms designed it himself. It took a Squarespace subscription and two months of intermittent work to get things up and running.

“I like it,” I say. The leafy greens—lovingly raised and carefully Instagrammed—look great. Online registration and payment for the farm’s CSA, which guarantees customers a share of the seasonal produce, makes the whole thing easy. And instead of simply clicking “confirm,” the newsletter subscription button reads “KALE YEAH.”

Satisfied with my response, Sanchez is ready to get down to business. The 26-year-old farmer launches into an animated description of the density of his lettuce beds; the value of veganics, a nascent method of cultivating plants without animal-based fertilizers; and the ceaseless, indefatigable weeds, which will happily crowd out Sanchez’s crops if he doesn’t kill them first.

Besides the name, there’s a lot about Sanchez and his Salinas, California farm that seems unusual. At about an acre, it’s small—smaller than some people’s backyards. The national average farm size is around 440 acres. At 26, Sanchez is a young proprietor. Since the 1980s, the average age of farmers has risen in every USDA Agricultural Census. Currently, it hovers around 58 years old. And Sanchez’s constant tinkering with everything from seeding techniques out in the field to the promotion and sale of his produce online is evidence of an experimental approach, not dictated by the confines of conventional, large-scale agriculture.

While farming is often difficult for both the body and mind, Sanchez says he and many of his fellow young farmers (roughly defined as farmers under 35) are motivated by a desire to set a new standard for agriculture. Many of them are starting small with the hope of refining their climate-conscious practices and slowly working to scale them over time. To do this, young farmers are employing a bevy of technologies, some new and some… not so new.

In 2017, venture capitalists and others invested approximately $1.5 billion dollars in the “ag tech” industry, according to TechCrunch. Areas of focus included artificial intelligence, which could increase automation and lower costs on large-scale farms, as well as “biologicals,” or natural supplements to crop production, which international conglomerates like Monsanto hope will provide environmentally-friendly alternatives to its heavy-duty chemical products like Roundup.

But many of these products aren’t within reach for small-scale farmers like Sanchez. Those with just a few acres have to think a little more creatively to get the job done.

Lindsey Lusher Shute is the executive director of the National Young Farmers Coalition, an organization she helped to establish upstate New York in 2010. With chapters now in nearly 30 states (including the District of Columbia), the coalition seeks to connect new farmers to training, land, and jobs. It also advances a policy platform, which encompasses things like helping young farmers navigate student loans. She says that the young farmers she knows are guided by their love of agriculture—and aided by their technology savvy. To find inexpensive and appropriately-sized tools, they collaborate, innovate, and retrofit whatever’s available to them.

Many farmers look to the history books for solid if somewhat forgotten advice. Lusher Shute and her husband own a Allis-Chalmers Model G tractor, which looks more like a neon pedal boat than farm equipment. But they’ve turned their machine, which was constructed sometime between 1948 and 1955, into an electric vehicle. “We see a lot of this hybrid[ization]—of taking the best from previous generations of farming,” she says.

Retrofitting allows small-scale farmers to buy something relatively cheap at an estate sale or on eBay and turn it into a modern tool. In the case of the Allis-Chalmers Model G tractor, it was less expensive than a new machine, and with a bit of work, its owners made it totally silent and emission-free.

Sometimes the old stuff just works better, or more efficiently. Lusher Shute says she recently watched an Instagram video of young farmers using a horse to help them tend to their fields instead of a modern—or refurbished—tractor. “They’re not doing it because they want to go back 100 years,” she says. “They’re doing it because they understand the challenges we’re facing here in 2018.”

For his part, Sanchez says he recently made two very different investments at Lazy Millennial Farms. Sanchez, who receives financial help from his family and a Salinas-area farm incubator called ALBA, was able to purchase a wheel hoe. The hand-operated tool, which plucks weeds and agitates soils, dates back to at least 1701. It’s still manually operated, but Sanchez hopes the partial automation will reduce the amount of time tasks like weeding currently require.

The tried-and-true wheel hoe stands in stark contrast to Sanchez’s other gadget: a propane-powered flame weeder. As you’d imagine, the gizmo, which entered into public domain only in 1997, uses heat and fire to kill weeds as they sprout.

Taken together, tools as varied as the wheel hoe and Squarespace, promise to make farming a little bit easier—or at least a little more accessible. “They’re not recent technologies, because conventional farmers use it, but [they’re] recent technologies for the scale of farming that I’m doing this at,” Sanchez says. “Now there’s more people investing… and making farming way more effective for small farmers.”

Farmers have a long history of refurbishment, tinkering, and invention. Look no further than founding farmer Thomas Jefferson, who is credited, among other things, with inventing the moldboard plow, which turned over soil with little resistance compared to other plows of its era. But the future of agricultural technology is about to change, according to many experts. The hope is that farmers will change with it.

Dennis Donohue is the former mayor of Salinas, California, the town two hours south of San Francisco where Lazy Millennial Farms was founded. He currently works with the Western Growers Center for Innovation and Technology, which brings together farmers, business people, engineers, and others to address problems from managing regional drought conditions to the implementation of cutting-edge robotics.

“The reality is, the farm of the future is going to be different—different skills and tools required,” Donohue says. Right now, many farmers rely on tractors, which they maintain and operate themselves. This requires resourcefulness and know how, but it’s fundamentally different than operating a remote-controlled tractor from a screen in an office, as Donohue predicts many farmers one day will. He sees software designers, engineers, and P.h.D. scientists as increasingly essential components of a coming agricultural revolution.

Lusher Shute says they’re already getting started. “One time, we lost an entire greenhouse full of plants,” she recalls. The farmer couple was renting land, which is common among first-generation farmers just starting out. The lease came with certain restrictions, including the inability to erect new structures on the site. So they leased a second parcel of land elsewhere to keep a greenhouse. But on a hot day, “the thermostat got out of whack and we lost a bunch of seedlings,” she says.

Lusher Shute and her husband couldn’t recoup their losses, but they found a way to prevent history repeating. With the help of Farm Hack, an organization dedicated to open source modifications of agricultural tools, they designed a system that delivered a text message whenever the temperature of the greenhouse went into the danger zone. It didn’t fix all their problems, but it was a step in the right direction.