Volcano vocabulary to help you understand the most recent eruptions

Spatters, clinkers, and lahars, oh my. 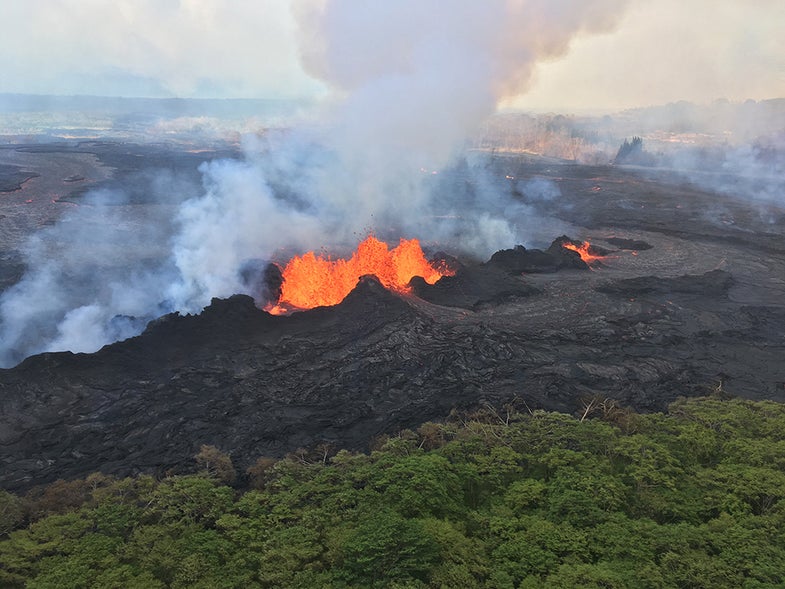 The distinction between lava and magma is a fine one. Both terms refer to molten rock, but once magma leaves the earth’s interior and flows out the open air, it becomes lava. It’s sort of like the alchemy of “meteor” into “meteorite” once a chunk of space rock touches ground—a linguistic metamorphosis as much as, or more than, a physical one. The ongoing eruption of Kilauea in Hawaii has brought volcano jargon to the surface, like an effusion of mafic (that’s low-silica, oozing magma to you). Maybe you’ve heard of “laze,” the haze that issues forth when hot lava hits seawater, billowing clouds of hydrochloric acid and particles of glass that can be toxic to inhale. There’s also “vog”—volcanic smog that drifts from active volcanoes like Kilauea, reacting with sunlight and oxygen to form a hazy fug that often reaches the far end of the Hawaiian island chain. But if you want to sound like a volcanologist, you’ll need to get a few more terms under your belt. Here’s a quick guide to help you mind your ‘pahoehoe’s and ‘coulee’s. Pahoehoe & A’a There are two kinds of lava. Pahoehoe—basaltic, iron-rich lava that moves quickly and smoothly, forming ropy masses and hollow tunnels—and a’a, a viscous, chunky lava that hardens into a rough or spiky surface. Both names come from Hawaiian language: hoe (pronounced “hoo-ee”) means “to paddle,” for the way the swirling lava resembles eddying water. A’a comes from the Hawaiian word for “to burn.”

Both kinds of lava can be difficult, says Einat Lev, volcanologist and assistant professor at Columbia University’s Lamont-Doherty Earth Observatory. Studying volcanoes in the field often means trekking over cooled or cooling lava, so she’s had to navigate both. While a’a lava can cut up a pair of boots (or, should you stumble, a hand or a leg), pahoehoe can be even trickier. When this smooth-running lava cools, it forms a thin, glassy shell that can break underfoot. Beneath the insulating layer of hardened lava, there might still be hot lava flowing, or there might be empty space where the lava has drained away. In either case, you are likely to end up with some flesh wounds.

Lava flows—which can be as hot as 2000 degrees Fahrenheit—are not always homogeneous like a well-mixed cake batter. The rough chunks of solidified lava that float on top of a molten flow are called clinkers. Add enough clinkers together and you get something called “cauliflower lava,” which Lev describes as “round but with rough surfaces.”

Spatter is a verb for what volcanoes do, but it’s also a noun: the spatters that spatter up from volcanic vents. These droplets of molten rock can vary in size from a couple millimeters to tens of centimeters—picture a bowling ball—and can be surprisingly heavy. In May, the first reported injury from the Kilauea eruption occurred when a man standing on a third-story balcony was hit with an errant spatter from a nearby vent. It reportedly “shattered” his shin. A spokeswoman told Reuters that spatters, though small, may weigh “as much as a refrigerator.”

You’ve probably heard of “pyroclastic flow,” i.e. the terrifying clouds of ash and gas and rock that buried Pompeii when Mount Vesuvius erupted in 79 A.C. These nightmare clouds can be as hot as 1800 degrees F and move between 50 and 450 miles per hour. “Pyroclast” means, literally, fire-broken—consider that your warning to stay away from explosively erupting volcanoes. Unlike Kilauea’s slow and steady eruption, Guatemala’s Volcan del Fuego burst in a sudden, explosive event on June 3—one that sent pyroclastic flows into residential areas and killed at least 25 people.

Speaking of Pompeii, the ongoing excavation of the ash-entombed ancient city was recently punctuated by the discovery of a harnessed horse during an investigation into the theft of an ancient fresco from the walls of a Pompeiian villa. “Tombaroli”—Italian tomb raiders—have been illicitly digging through the volcanic deposits for decades, often destroying archaeological remains in search of valuable objects to sell on the black market.

Less well known than pyroclastic or lava flows, lahars are one of the most destructive side effects of a volcanic eruption. Essentially giant mud slides, lahars feature ash and volcanic debris mixed to a consistency like wet cement as they barrel down the side of a mountain at up to 40 miles per hour.

Lahars can be hot or cold, and may be triggered by a pyroclastic flow that rapidly melts ice and snow on a mountain. The word comes from Javanese, but volcanoes around the world experience lahars. In 1985, the eruption of Colombia’s Nevado del Ruiz set off lahars that buried an entire town and killed 23,000 people in the deadliest volcanic eruption since 1902.

When lava sprays up in fountains or flows quickly over uneven terrain, it can spool off golden strands of volcanic glass like so much spider silk. Though lava may contain a lot of silica—the chief component of glass—it only forms glass when it is cooled rapidly, whether in small particles or in solid chunks of volcanic obsidian. United States Geological Survey volcanologist Aleeza Wilkins describes Pele’s hair as slender threads with a diameter of less than half a millimeter, though they may be as long as 2 meters. Named for the Hawaiian volcano goddess Pele, the delicate, golden splinters may drift on the breeze for miles before falling to the ground. Much like fiberglass, you don’t want to get Pele’s hair on your skin or in your lungs.

From the Greek kryptos—secret—a cryptodome is a subterranean bubble of magma that makes itself known as swelling on the flank of a volcano. These molten pimples may indicate that an explosive eruption is near. During the lead-up to the Mount Saint Helens eruption in 1980, a large cryptodome formed on the volcano’s north face. Over the course of a month, it grew until it jutted 500 feet from the mountain, before an earthquake dislodged a massive landslide and the bubble of magma finally exploded outward.

Bonus word: A coulee is the formation that results when a lava dome forms on a steep slope, creating an elongated shape.

Also called flammagenitus clouds, these form as a result of volcanically heated air that rises rapidly above a volcanic crater, causing water vapor to condense in a towering column. Most often seen above forest fires, these clouds can also form above eruptions or even above volcanic fissures, says Wilkins. If there’s enough water vapor to turn these clouds into full-on thunderclouds, pyrocumulus makes one more linguistic transformation, into pyrocumulonimbus, with accompanying thunder and lightning.