How to handle a koala-chlamydia epidemic 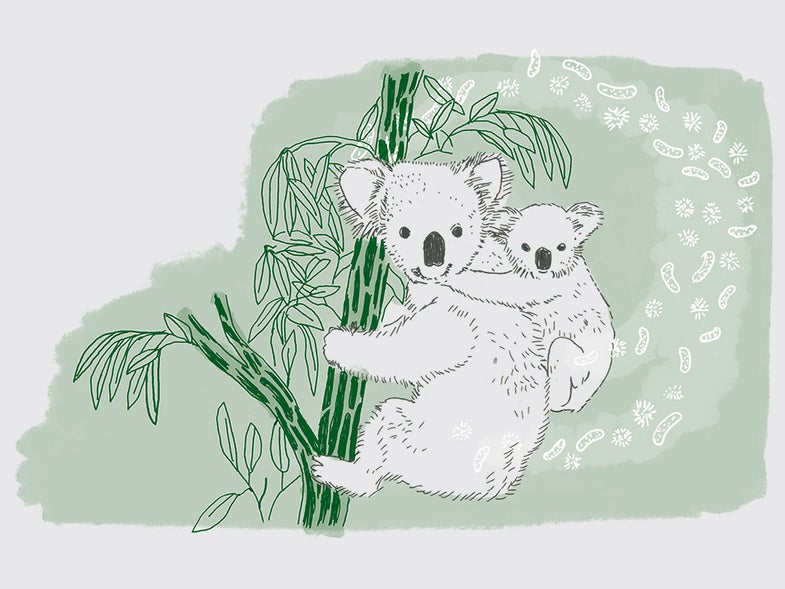 In 2015, I went to Australia to collect koala poo, which can teach us about their complex microbiome. Bacteria in their guts break down toxic tannins in the eucalyptus leaves they eat. We think one reason the babies eat their moms’ poo is to acquire microbes that will give their own system toxin-degrading powers. But I wanted to know for sure.

An animal strain of chlamydia infects many Australian koalas. When I got to the wildlife hospital, veterinarians were treating them with antibiotics, but they were still sick. Some had stopped eating and were wasting away. Their poo, which is normally the size and shape of chocolate-­covered almonds, looked really dry, like the stuff at the bottom of a Cheetos bag. We guessed the drugs might be damaging their gut flora—which could prevent them from passing on key bacteria to their babies.

Some koalas had survived treatment, and I soon discovered that they had one particular microbe in their poop: Lonepinella koalarum, a possible tannin degrader. It was absent in all of the marsupials that died. While other bacteria also break down toxins, this one seemed linked to the animals’ fates.

To know definitively whether L. koalarum has tannin-processing genes, I need to sequence that microbe’s genome. If antibiotics are wiping out a microbe crucial for eucalyptus digestion, that could push researchers to find another treatment for koala chlamydia.