Here’s a great excuse to stop mowing your lawn

Introducing the lazy way to make your yard into a pollinator haven. 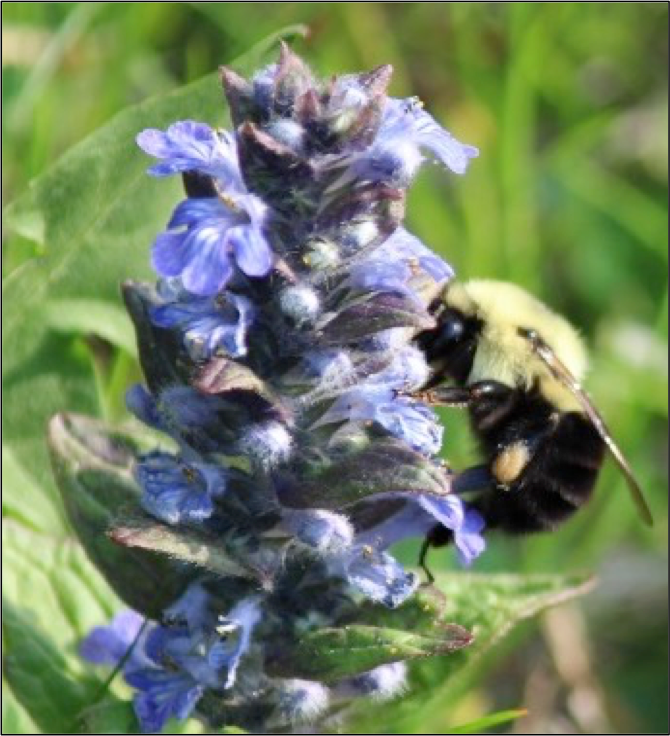 Around the world, bee populations have plummeted because of habitat loss and pesticide use. But green spaces within cities and towns can give bees a much-needed refuge. And if you have a yard, then you too can help—especially if you’re lazy about lawn care.

It turns out that lawns with plenty of weeds like dandelions and clover can offer nectar and pollen for bees in suburban areas where prime habitat is hard to come by. Scientists recently identified 111 different bee species in just a handful of yards in Springfield, Massachusetts. Most of these were tiny sweat bees about the size of a grain of rice, but the yards also attracted honeybees and bumblebees.

“These were not yards that had pollinator gardens, they didn’t have special flowers, they weren’t next to forests or other types of more natural landscapes, so that in and of itself was pretty amazing,” says Susannah Lerman, a research ecologist for the U.S. Department of Agriculture’s Forest Service.

She also found that by mowing less frequently, you can help bees get the most out of your lawn. Yards mowed every two weeks attracted more bees than those clipped weekly. “It’s really a nice marriage between having a lawn that looks nice and a lawn that’s good for bees,” says Lerman, who reported the findings last month in the journal Biological Conservation. “Here is something that everybody can do by doing less.”

To gain access to people’s yards, Lerman and her team offered to mow them for free. They visited a total of 16 houses over the course of two years from May through September, mowing them either weekly, once a fortnight, or once every three weeks. The researchers checked in every few weeks to see how many bees the lawns had attracted and how many lawn flowers like dandelion and creeping charlie had sprung up.

They also counted how many planted flowers like azaleas and marigolds were growing in the yards and how sheltered they were by trees. This was to make sure that the lawn flowers were responsible for any differences between the yards, not the other plants.

Yards that were mowed less frequently did indeed have more flowers. But having the most flowers didn’t translate to the most bees. “Perhaps in the yards that were mowed every three weeks the grasses were just a bit too long,” Lerman says. The tiny sweat bees that were the most common visitors to lawns may have had trouble reaching the flowers on these more unkempt lawns.

The two-week lawns seemed to host both plenty of flowers and grass that was short enough to allow the bees to reach them. This is probably for the best, Lerman says. “The yards that were mowed every three weeks, they just really looked messy.”

Since Lerman and her team only visited lawns in western Massachusetts, it’s not clear yet whether the “lazy lawnmower” approach will help bees in other climates. In future, she would like to try the experiment again in different parts of the country. She and her colleagues at the Forest Service and the City University of New York are now investigating how birds, bees, and other animals respond to different lawn care practices in six cities.

No green thumb? No problem.

If you live in the northeast and want to make your yard more appealing for bees, though, mowing every two weeks seems to be the sweet spot. One advantage to this approach that it’s a lot less work than planting a pollinator garden. “Pollinator gardens are great and they really are effective at providing nectar and pollen for bees and other pollinators,” Lerman says. But to maintain a pollinator garden, you need to have time, money, space, and the knowledge of how to care for these plants. Mowing every two weeks, on the other hand, is something that everybody with a lawn can do. Firing up your lawnmower less often also means fewer greenhouse gas emissions.

Should you make the switch to “lazy lawn mowing,” Lerman suggests letting your neighbors know what you’re up to. She and her colleagues plan to create downloadable signs to explain that a lawn is bee-friendly. “It’s really finding that balance of what’s going to be acceptable in your neighborhood,” she says. “Especially if it’s during a cooler, moister part of the growing season when the grasses can grow longer pretty quickly… let your neighbors know that you’re not just being neglectful.”

If whole neighborhoods or cities adopted the lazy lawnmower approach, it could have a pretty big impact for bees, Lerman says. Lawns cover more than 63,000 square miles in the United States, an area roughly the size of the state of Florida. “That’s a lot of grass,” Lerman says. “As long as everybody’s just doing a little bit it’s going to scale up.”

There are also a few other things you can do to make your property into a bee refuge without a lot of work. Lerman recommends skipping pesticides and leaving a few bare patches, which are ideal places for ground-nesting species to make their homes. Also avoid using heavy mulches, which make it difficult for these bees to nest. And when fall arrives, don’t rake up every leaf. A leaf pile can create a shelter for bees in cold weather. “Maybe have it messy in the back of the house where your neighbors aren’t going to see it as much and have the front be a little bit more manicured,” Lerman suggests.