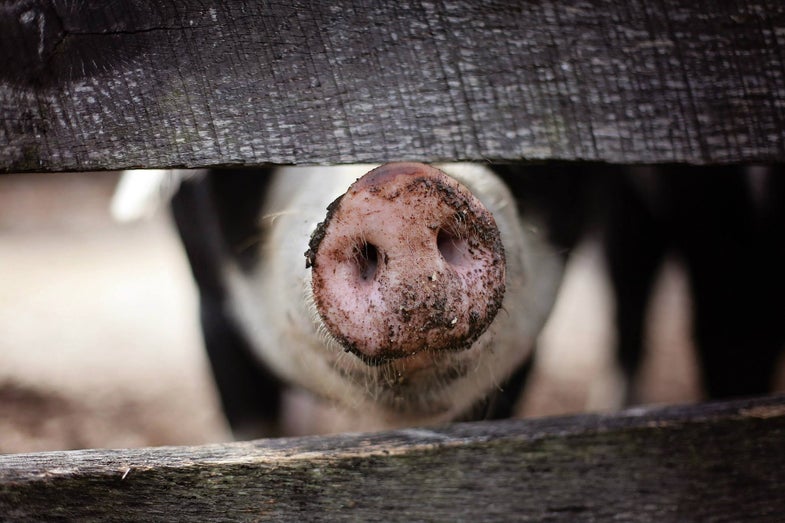 Scientists have been tinkering with the genes of plants and animals for years to cure diseases, make fruits and vegetables heartier or tastier, produce crops that are resistant to pests, drought, and other scourges, or prompt fish to grow faster. In recent years, however, thanks in part to the ravages of climate change, some researchers who manipulate genes have assumed a new focus: saving the planet. Among other things, they are making grass more palatable for cows and designing climate-friendly cattle that expel less heat-trapping methane. And now they have turned to pigs. Globally, people consume more pork than any other meat. But there is a big environmental downside to raising pigs. Pigs can’t make three important enzymes they need to digest the nitrogen and phosphorus in their feed. So they poop most of it out, which ends up polluting the air and water. Pig farmers could add these enzymes to pig grain, but that would cost more money, so scientists have come up with another way to fix the problem.

By tweaking the animals’ genes, they’ve made a new generation of transgenic pigs better able to digest these nutrients. They did it by transferring DNA fragments needed to make the required enzymes (β-glucanase, xylanase and phytase) through a process known as somatic cell nuclear transfer, a fancy name for cloning. “It’s a mature technology that’s been applied in reproduction of various animals for decades,” says Huaqiang Yang, a scientist at South China Agricultural University, and member of the research team.

The scientists selected the enzymes to be compatible with the microbial communities in the animals’ digestive tracts, and to allow the salivary glands to secrete them. This assures that digestion starts in the mouth, the scientists say, making the process more efficient.

“The aim of our study was to enhance the digestion of feed grain in pigs to see if it lowered the release of both phosphorus and nitrogen from their manure,” says Zhenfang Wu, senior author of the study, which appears in the journal eLife along with a companion article commenting on the research. Once the process was complete, they examined the pig manure and urine—”which was rather unpleasant work,” according to Yang—to measure levels of the excreted nutrients.

They found that the genetically engineered pigs were able to digest phosphorous, nitrogen, and other key nutrients, thereby excreting fewer dangerous pollutants. The ability to reduce these levels will “benefit the protection of water and soil at intensive pig production sites,” Yang says. Moreover, because the pigs took in more nutrients, they also grew faster.

Furthermore, the pigs appeared to suffer no harmful side effects. Their mood, behavior, reproductive capacity, blood physiology and natural biochemical processes remained unchanged. While pigs are not a major source of agricultural greenhouse gas emissions — especially when compared to cattle and sheep — curbing nitrous oxide emissions from pork will make a difference nonetheless.

Though nitrous oxide represents only about 6 percent of all U.S. greenhouse gas emissions, it traps 300 times as much heat as carbon dioxide, according to the EPA. And the volume of nitrous oxide in the atmosphere is increasing, as it seeps from farms, smokestacks, and tailpipes.

Yang says that while pig farmers sometimes add dietary supplements to pig feed, it would cost more in the long run than to update a pig’s DNA. Scientists compared transgenic pigs with non-transgenic pigs fed the same diet, but with supplementary enzymes. “We found they both had improved feed utilization at a similar level,” Yang says. However, “our pigs save the cost of using expensive dietary supplementation of multi-enzyme preparations.”

Some countries, including China, restrict or otherwise regulate the use of genetically modified pigs and other animals, but Wu hopes the rules will eventually loosen as the pigs prove safe and cost-effective. “Our findings indicate that these pigs are promising resources for improving feed efficiency and for reducing the carbon footprint of the pork industry,” Wu says.