Carbon emissions are sucking the nutrition out of our food

As CO2 rises, the nutrient content of many plants goes down. 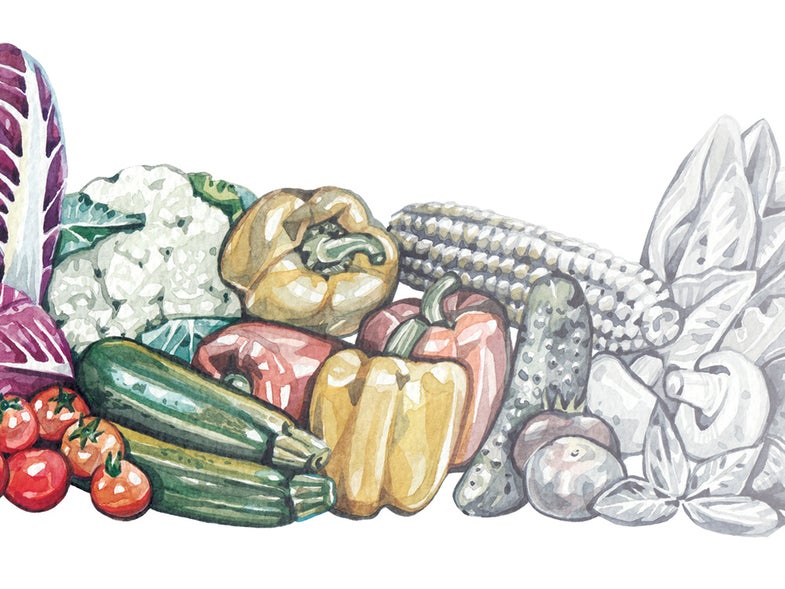 Any middle-schooler groks the fundamentals of photosynthesis: Fueled by sunlight, plants turn carbon dioxide and water into sugar and oxygen, which they use to grow stems, roots, leaves, and other tasty bits. As CO2 levels continue to rise—we’re on track to double pre-Industrial levels in the next few decades—it might sound like we’re in for a vegetational boom. But any greenery growth spurt will come with a downside. CO2-charged sprouts contain more starches and sugars, and fewer minerals and proteins. You can try to avoid junk food, but our plants are getting junkier too. See, plants also require proteins in order to grow, which they synthesize using elements they draw from the soil, such as nitrogen, phosphorus, and potassium. In the course of sucking up those molecules, greens also take in nutritious minerals like zinc and iron. Plants often absorb more than they need, storing the excess in their cells. Then humans get to eat them.

Agronomists, however, have recorded a steady decline in some of those minerals, ­proteins, and vitamins for half a century. For example, USDA data shows that kale from 1999 had 23 percent less iron than 1950s greens did. Historically, scientists have blamed industrialized farming for practices like overworking soil, which strips it of the good stuff.

But now the blame is shifting to include CO2. In 2002, mathematician Irakli Loladze theorized that photosynthesis requires fewer proteins as CO2 climbs, which means plants acquire fewer incidental micronutrients while sucking them up—skewing the ratio of healthy to unhealthy content. He recorded an 8 percent nutrient drop, on average, in certain kinds of crops, including rice and wheat.

In 2014, Loladze and another group of scientists both published research lending weight to his earlier hypothesis. The two studies drew upon more than a decade of data from agronomists, who had planted 41 varieties of six food crops—wheat, maize, sorghum, field peas, soybeans, and rice—and surrounded part of each field with nozzles blasting enough CO2 to warm any greenhouse. Analysis of the harvests showed maize and sorghum fared fine, but rice—a staple for half of humanity—lost about 3 percent of its zinc; that could put hundreds of thousands, if not millions, of people at risk of deficiency, leaving them more vulnerable to respiratory diseases, diarrhea, and malaria.

If current trends continue, global atmospheric CO2 levels will match those experiments within the next 50 years. When that happens, researchers estimate that hundreds of millions—mostly pregnant women and children living in poverty—could end up short on essentials such as iron, protein, and, yes, zinc. Plus, there’s a chance these extra-sugary plants will contribute to an uptick in diabetes—which is already one of the world’s top killers.

Unless we go cold turkey on our carbon habit (not likely!), we’ll need to focus on finding even-more-­nutritious grain varieties. Those crops would still suffer the consequences of too much CO2, but they might keep our diets healthy long enough for us to clean things up.