Even with non-native plants, backyard gardens are playing a crucial role for pollinators. 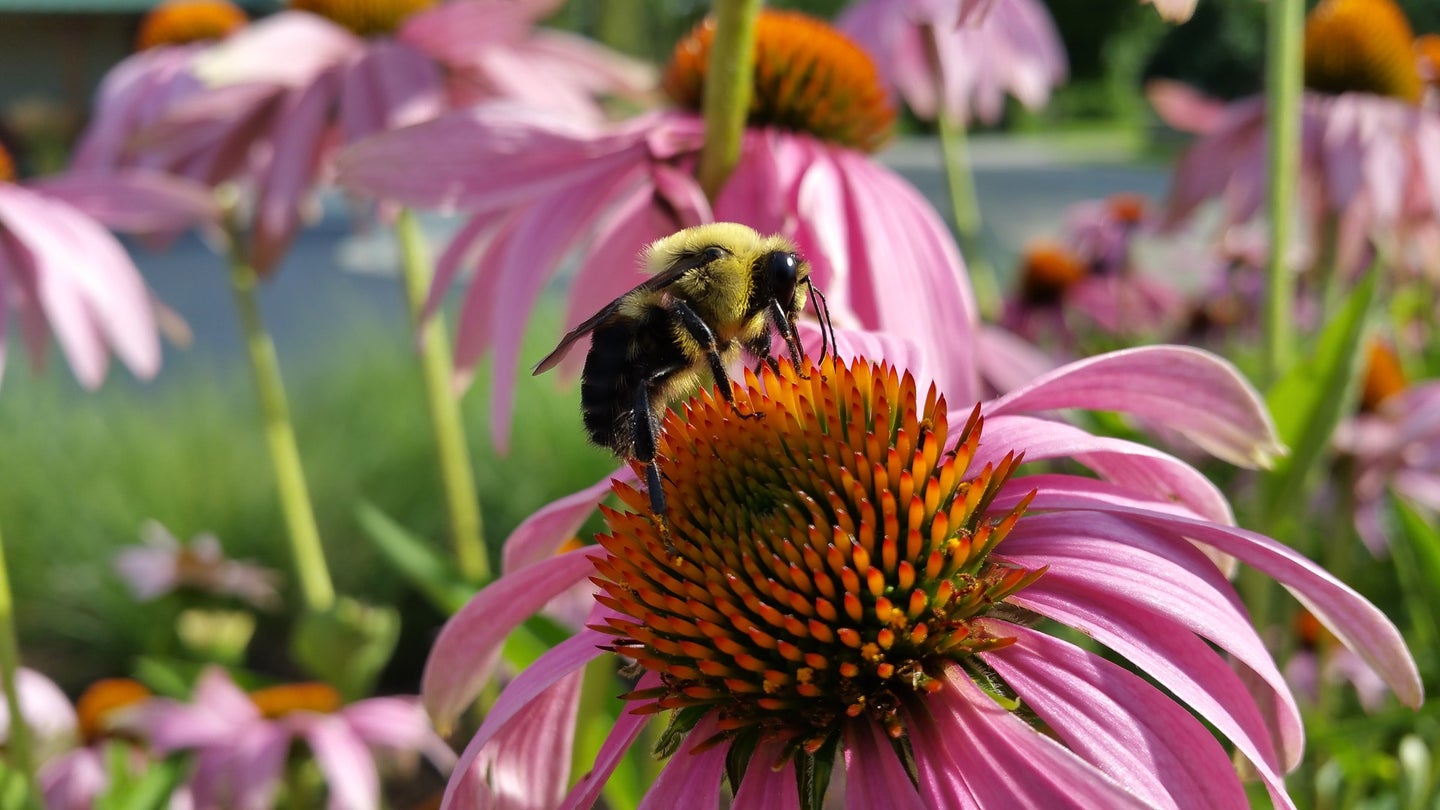 Bumble bees are one type of native bee common in backyard gardens. Echinacea or purple cone flowers are native to parts of the US. Brian Martin
SHARE

A small patch of green surrounded by miles of urban and suburban sprawl, Chicago’s Montrose Point park doesn’t seem like it would be a pollinator paradise. Medewin National Tall Grass Prairie, a protected and restored preserve more than fifty miles away from the pollution and bustle of the big city, does.

But when biologist Rebecca Tonietto surveyed the wild bee communities in both places, her conclusions surprised her: the number of bees and diversity of species was almost identical. The native bees did just as well in the urban park as in the more natural habitat.

She wondered: Was something going wrong with the prairie restoration? Or was there something particularly excellent about Montrose park? “Spoiler alert: that was it,” Tonietto says.

“As long as there’s something to eat, and a nesting place for the bees, and a mate within flight range, it’s a great place” for bees, says Tonietto. More than 10 years after her Chicago research, she is now a biologist at the University of Michigan-Flint, where she studies urban pollinator habitats.

Tonietto’s findings may have been surprising at the time, but they were no fluke. An emerging field of research shows pollinator communities, particularly native bees, might actually be making out better in some cities than in the countryside. Studies from across the globe have demonstrated that bee numbers and species diversity can be higher in some urban areas than in more rural settings dominated by intensive agriculture.

A recent study of UK cities poses one possible explanation: urban areas can offer a more diverse nectar selection than rural or natural ones— a wider array of flowering plants providing a steady supply of nectar sugar, an important food source for bees. Perhaps more surprisingly, the researchers found that non-native plants, which comprised more than 80 percent of all the garden plants they surveyed, made up a large proportion of those nectar resources.

[Related: Build a garden for pollinators]

The new study’s findings carry a subtle message that some conservationists and researchers worry will be misinterpreted by the public. Just because native bees visit exotic garden flowers doesn’t mean we should indiscriminately grow non-native plants or encourage more species invasion, they say. And just because cities can offer unexpectedly good habitat for bees doesn’t mean preserved, undeveloped lands are unimportant for conservation. “Obviously, cities are not perfect. They have a lot of environmental challenges for bees, and not just bees, for plants also,” says Panagiotis Theodorou, a community and evolutionary ecologist at the Martin Luther University in Halle, Germany.

The overall message, though, is a hopeful one: Home gardeners really can provide crucial help to wild bees and other threatened pollinators. “The actions of individuals who might feel they can’t make a difference in terms of nature conservation, they really do matter,” says Nick Tew, the lead author of the new UK study and a PhD student in urban ecology and conservation at the University of Bristol. “If a lot of people get on board and plant their gardens to be more pollinator friendly, that will make a massive difference.”

Insect populations, including critical pollinators like bees and wasps, have been in decline for decades, threatening the health of ecosystems as well as the world’s food supply. Most flowering plants need healthy pollinator communities to bear seeds and fruit and so do commercial crops like blueberries, cherries, apples, and almonds.

The insect decline has many causes, including widespread pesticide use, habitat loss, climate change, and pollution. But adding city habitats to the conservation toolbox could help bee pollinators survive in our increasingly human-dominated world.

And a healthy bee community needs plant diversity, not just nectar quantity. Like people, bees need a nutritionally varied diet, says Sara Leonhardt, a biologist studying plant-insect interactions at the Technical University of Munich in Germany. Timing is also crucial because bees need food throughout the spring, summer and fall, but plants generally flower at specific times of year. The best pollinator habitat provides a diversity of flowers over a wide range of time, says Leonhardt.

The new UK study found that urban, rural, and preserved landscapes provide about the same amount of nectar resources for bees per unit area. However, nectar sources in cities were made up of almost twice as many different plants. Home gardens, not parks, provided most of the nectar and plant diversity, and were the source of about 85 percent of all the nectar sugar in cities.

Tew’s research only looked at plants, not how many pollinators used them, but other recent work has found there are more kinds of bees in cities than surrounding areas. A 2020 study, authored by Theodorou, for example, found more bee species in German cities than in nearby rural areas.

Well-kept yards, community gardens, and parks provide more types of flowers than agricultural land, even though the latter dominates much of the rural landscape, according to Theodorou. In farmland, he explains, there is a boom-and-bust cycle. There may be lots of one type of resource for a short period of time—for instance, blooming canola fields in Germany—but “then you have nothing,” says Theodorou.

That doesn’t mean, however, that the showy, non-native plants gardeners favor are always as pollinator-friendly as native plants. Theodorou is still a big proponent of planting native species over non-natives. He points out that certain popular ornamental plants, like petunias, are bred solely for their appearance to humans and provide no nectar for pollinators at all.

Yet, in some contexts, non-native species are actually favored by wild bees over natives. In a study published in 2020 and conducted in Beltsville, Maryland, researchers found more native bees and species visited a plot of mixed, carefully selected non-native flowers than a plot of native flowers. Of the 120 bee species researchers collected, 11 were only found on the native flowers, while 23 were only found in the non-native plot. Nicola Seitz, who conducted the study and is now a scientific advisor at the Senckenberg Institute in Frankfurt, Germany, cautions that her results don’t mean that just any non-native flowers should be planted everywhere. “We always need to be careful when using non-native plants because they may disrupt local plant communities.”

But many people live in environments that have already been so altered that a garden of entirely native plants may not be feasible—or even advisable if the goal is to attract pollinators. For example, Seitz says her study site in Beltsville had very sandy soil in which only some native plants can thrive. In an untouched Maryland, that sandy meadow might border a forest, which could offer a different array of native flowers for bees to choose from. But “we don’t have our natural habitats anymore in the way that we used to have them,” says Seitz. “The ideal would be to have intact natural landscapes and habitats with an abundance of all of those native plants, but we simply don’t have them,” she adds. “We need to plan alternatives.”

There’s another important consideration, too: home gardens aren’t just for pollinators, they’re also for people. “I don’t want to judge someone’s garden, says Michigan’s Tonietto. “I want to celebrate their garden. And more is great. And maybe a few natives a year, that’s great, too,” she adds. But, scolding gardeners if they plant non-native species, especially given that native plants can be more expensive and more difficult to find than, non-native ornamental plants, doesn’t necessarily do any good.

One of Tonietto’s current research endeavors in Flint, Michigan, blends the human and bee benefits of gardens. The Porch Project, started by local resident Megan Heyza, began as a way to build a sense of community through repairing and beautifying peoples’ front stoops. When Tonietto heard about Heyza’s mission, she applied for a grant to add landscaping funds to the project. Tonietto and her team have since planted about 30 gardens around Flint’s east side. The researchers consult with each homeowner and plant gardens with either native plants or non-native ornamentals. The team then returns on a regular basis to survey the bees and other pollinators at each site. Early results seem to show that native bees use both native and non-native gardens, and that pollinator diversity seems to depend less on the types of plants and more on other variables like the amount of sunlight a garden gets. 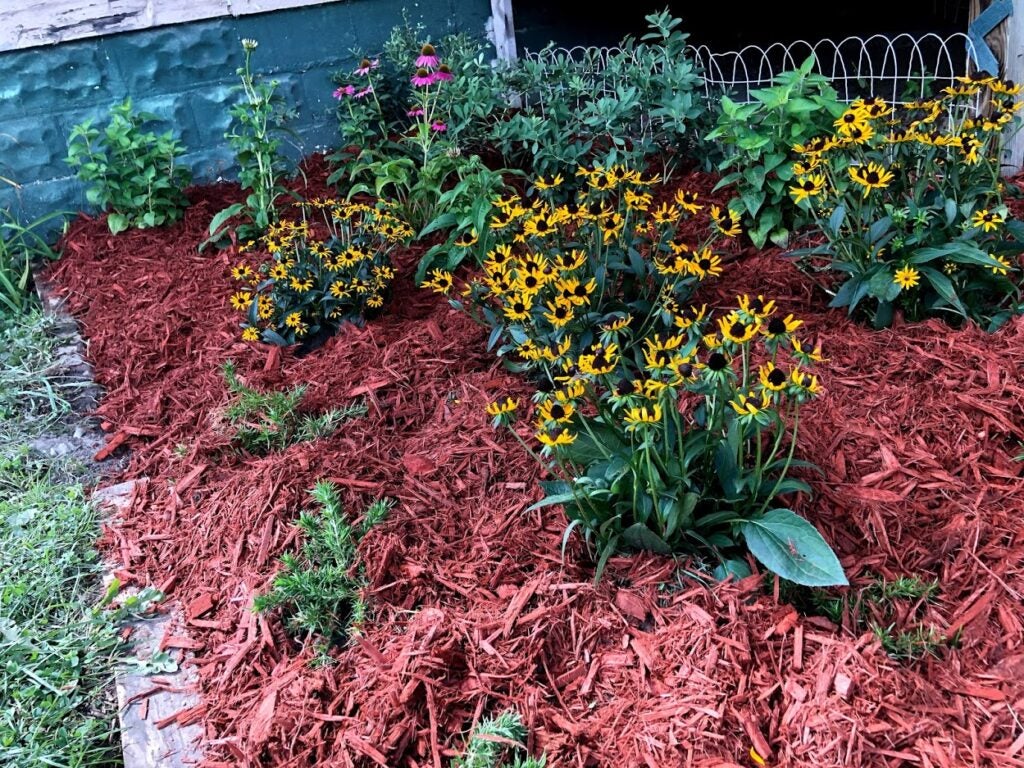 Rebecca Tonietto’s Porch Project experiments in Flint, Michigan show that native bees are attracted to native prairie plants (above) as well as a mix of non-native ornamentals (below). 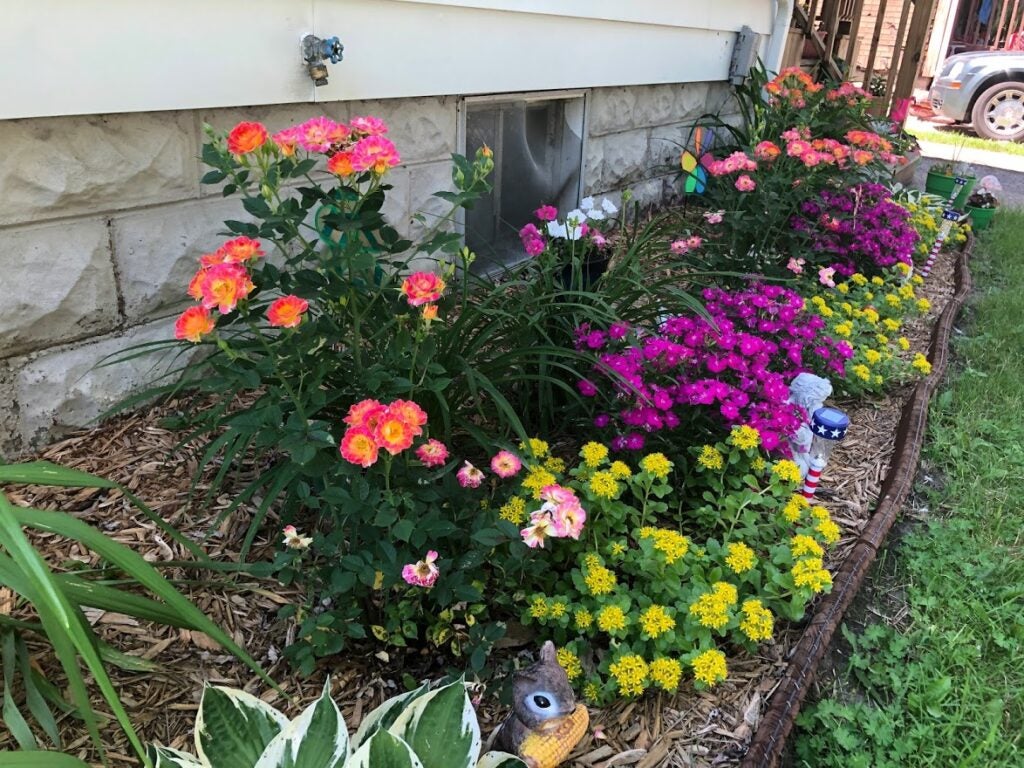 An example of one of the Porch Project gardens planted with non-native, ornamental flowers.

“If somebody’s favorite plants are their [ornamental] roses, and they want to have roses in their garden, that’s great. You should, and that’s fine,” Tonietto says. As much as she loves her native, Midwestern prairie wildflowers, she has some non-native plants growing in her own garden, too. A particular favorite are some lilies she transplanted from a previous family home.

“Better is better,” she emphasizes. Pollinator habitat lies on a continuous spectrum. Gardens can always be improved, but even tiny steps towards boosting biodiversity should be welcome. Lots of different flowers is better than a few, she says, and just about any flowers are better than none.