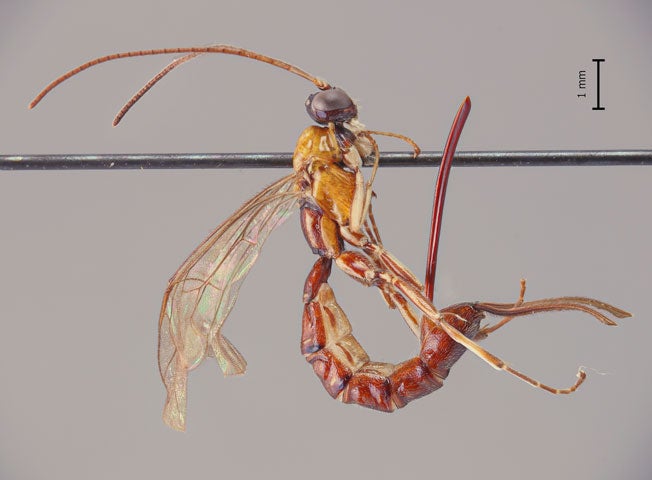 Charles Darwin once cited the evolution of parasitoid wasps as an illustration for why he couldn’t believe in the existence of God. An insect capable of injecting caterpillar bodies with eggs that would eventually pop open and allow tiny little wasp larvae to consume the host from the inside-out—a fate like this was violent enough for Darwin to conclude a benevolent higher power could not exist.

Darwin might have doubled down in light of a new discovery: Meet Clistopyga crassicaudata, an Amazonian wasp that’s only 9.8 millimeters long, yet armed with a hellacious-looking stinger that’s about half its body length, used to paralyze unsuspecting prey and deposit eggs that make the chest-bursting scenes from the Alien movies look like child’s play. (Also, let’s acknowledge this before moving on: the stinger basically looks like an erect bee phallus. This somehow makes it all so much worse.)

This terrifying monster from hell is just one of seven newly-discovered wasp species discussed in a new paper published in Zootaxa, but it’s certainly the most bizarre find. That’s not too much of a surprise, however, considering how little we know about these sorts of creatures, and how rapidly we’re stumbling on more and more of them. “Amazonian parasitoid wasps are largely unknown,” says Ilari Sääksjärvi, a professor of biodiversity at the University of Turku in Finland and a coauthor of the new study. “I have studied Amazonian parasitoid wasps since 1998, and have found hundreds of new species, along with describing and naming about 150 of them. The Amazonian parasitoid wasp fauna is extremely diverse.”

Wasps are already a pretty unique type of animal distinct from other insects, but parasitoid wasps make themselves even more distinct by avoiding social groups, hunting for prey and moving about solitary apart from mating. One of the most diverse animal groups on the planet, parasitoid wasps basically lay their eggs on or within other arthropods (insects or spiders), and use those creatures as unwitting hosts for their offspring. It’s one of the most successful spawning methods within the animal kingdom, and explains why this behavior has persisted so aggressively over millions of years.

C. crassicaudata is no exception. Sääksjärvi and his team have studied the Clistopyga genus for quite a while now, and have learned that it’s quite a niche-within-a-niche species. The Clistopyga genus specializes in attacking spiders. The female (whose stinger is not only fearsomely long, but usually wide as well) injects arachnid hosts with a venom first to paralyze them. The wasp then lays its eggs on the spider’s body. They hatch, unleashing larva that soon eat the still-paralyzed host alive, as well as any spider eggs or hatchlings within the spider nest.

Many species within the genus use their stinger like a felting needle, and C. crassicaudata probably commits to the same mechanism. Sääksjärvi also suggests the huge stinger might be used to break open wood bark in order to enter spider egg nests, but emphasizes this is just speculation.

What about the other six species the team found? Sääksjärvi they’re all interesting, but they’re much less endowed with big stinger energy than C. crassicaudata.

In all likelihood, however, there’s a good chance C. crassicaudata‘s stinger will get bested by another species of wasp waiting to be discovered. The biodiversity of the Amazon forests is staggering, and we’ve only glimpsed at a fraction of what’s probably lurking in this ecology. Hopefully we can clamp down on our deforestation habits before those species are lost forever.