What is ‘trancing’ and why does it make my dog act so weird around plants?

Some dogs are secret ghost-walkers. 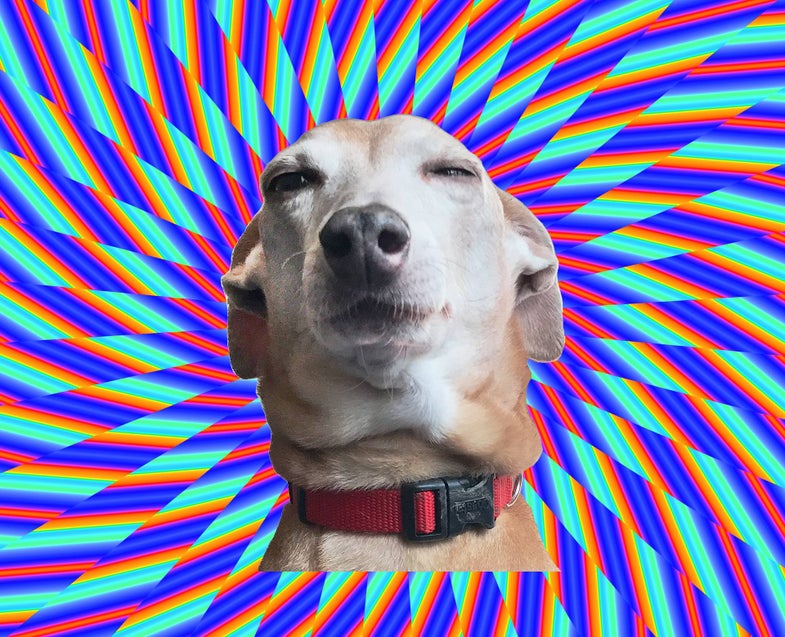 A Spanish greyhound trances under a curtain and plant, much to the confusion of a fellow greyhound.

Caroline Coile’s dog was behaving strangely. Her Saluki, a slender sighthound named Bibi, kept sneaking into the closet. Inside the dark, enclosed space, Bibi—normally a sprightly dog—slunk around in excruciatingly slow circles as Coile’s hanging clothes dragged delicately across her back.

Coile—a researcher specializing in canine genetics and behavior at Florida State University—brushed it off as just a quirk of Bibi’s until she caught her next dog, another Saluki, doing the same thing years later. This time, the love affair was with a backyard bush. The dog moved like a chameleon; one sluggish, rocking step at a time, letting the drooping plant leaves trail across his back.

“At the time, we had no idea what it was. We would just say, ‘Oh look, he’s doing slow-mo dog again!’” says Coile.

This slow-motion slink is known as “trancing”—sometimes called ghost-walking—and is most common in bull terriers and greyhounds. But the strange behavior worried some pet owners. Were their dogs having seizures? Was it some form of obsessive-compulsive disorder?

Trancing is definitely weird, but Coile says it’s not an indication your dog is suffering from an undiagnosed neurological condition. In fact, one study published in Veterinary Record found trancing to be “apparently purposeless.”

“It’s not like they’re in an actual trance where they’re looking into a crystal ball or something,” she says. “But it does seem like they go into some sort of meditation-like state.”

For those who’ve witnessed a dog trance, it certainly seems like your four-legged friend has left this earthly plane for somewhere more psychedelic. Once the object of the trancer’s desire is spotted—typically something hanging, like plant leaves or curtains—the dog creeps beneath it, ears completely flat, nose pointed up, eyes squeezed shut in what looks like utter ecstasy.

But why the heck do dogs trance? Coile has one theory: it just feels good.

“I think obviously they very much enjoy it,” she says. “If you happen to interrupt them, they always look at you like, ‘Really?’ And then they trot away in disgust. It’s a sort of thing they enjoy doing by themselves.”

Alice Moon-Fanelli, a certified animal behaviorist from the Cummings School of Veterinary Medicine, stumbled upon trancing while studying compulsive tail-chasing in bull terriers.

The odd, unfamiliar behavior troubled her. Bull terriers are a breed that suffer from debilitating doggy-OCD, also known as canine-compulsive disorder (like humans, dogs can behave compulsively, but unlike humans, they don’t experience the high level of obsessive thinking found in people with OCD).

There have been cases of tail-chasing in bull terriers so severe, the dogs were euthanized. Owners reported some dogs wouldn’t stop even to go to the bathroom, and others wouldn’t eat. Some would injure themselves, or got so aggressive with humans who interrupted their twirling that owners had to put them down. Moon-Fanelli worried that trancing was yet another manifestation of compulsive disorder in the breed.

But trancing appeared to be unrelated, and on further study, the behavior seemed completely harmless—if still abnormal. “The bull terriers would go under Christmas trees, curtains, towels… anything hanging that would cause dorsal stimulation,” she says. “Their eyes glaze over, and they would go into this slow moonwalk. Then they’d come out of it and be fine.”

Trancing seems to be unique to dogs, and for reasons yet to be determined, bull terriers and greyhounds lead the pack as top trancers. Coile says she believes trancing runs in breeds, but there’s no evidence the behavior is hereditary. So far, all dog experts know is that trancing is totally a thing, but what type of thing is still unknown.

So if you catch your dog sneaking off for some alone time with your favorite houseplant, there’s no need to panic. Your pup is just having a good time, and maybe meditating on the very nature of existence. Or at least the nature of treats.