They're cool, but it's easier and cheaper to save the ones we've got 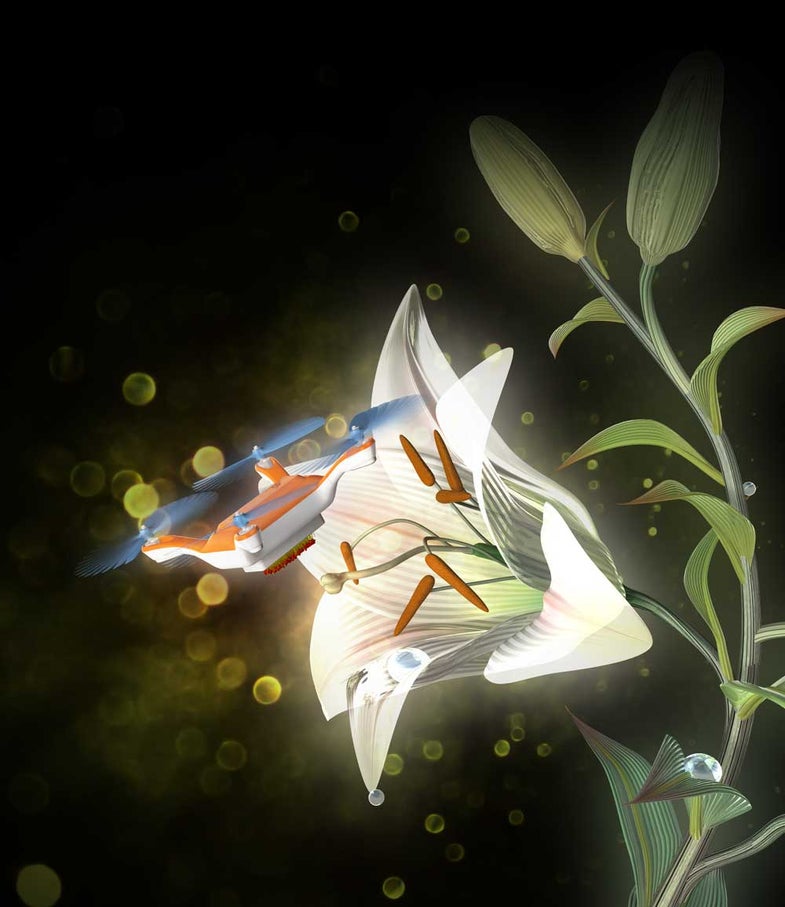 In 2007, chemist Eijiro Miyako created a thick, viscous, sticky gel that could conduct electricity. He hoped that it could be used in batteries or actuators, but the gel didn’t perform as well as he hoped, so he shoved it in a drawer and forgot about it.

Years later during a lab cleanup, Miyako found the gel, and decided to try a new experiment with it, attaching the gel to fibers, and then attaching that long-lasting sticky gel to an off-the-shelf drone—and crashing it into some flowers.

The result is a large robotic pollinator described in the journal Chem. In addition to putting together the remote-controlled pollinating drone, Miyako and colleagues also tested the gel on ants, and found that ants with a small coating of the gel attracted more pollen than ants without.

Miyako’s experiment was inspired by the plight of pollinators like bees around the globe, many of which are currently imperiled by a wide variety of factors.

Dave Goulson, a biologist who specializes in the study of bumblebees, says that a combination of factors are leading to the declining health of bee populations worldwide. “The poor bees are short of food, poisoned by pesticides and infected with foreign diseases. There are a few other minor things as well, but you stick all that together and it’s hardly surprising that they’re not doing so great,” Goulson says.

The electrically-charged nature of the gel makes it an ideal candidate for mimicking the way pollen interacts with bees.

Bees tend to have a positive charge while flowers and their pollen tend to have a negative charge. Opposites attract in nature, with pollen practically flying onto the bee as it approaches. The charged gel serves a similar purpose, capturing the pollen and transporting it to the next flower.

So would this actually work as a supplement to stressed pollinators who must contend with a loss of habitat? Miyako hopes so, and is looking for partners to help him explore the idea further. “Hopefully, our multidisciplinary research could be open a new door for creating more new materials and new idea for robotics, biohybrid creatures, and something like that, those can be helpful for our human health and welfare,” Miyako said in an e-mail.

But not everyone is convinced. Goulson, who was not involved in the study, views the gel and the robot bees as an interesting experiment—but not a solution for our pollinator problem.

“Bees have been pollinating flowers for 120 million or more years, they’re extremely good at it,” Goulson says. “The idea that you could build something anywhere near a cost-effective replacement strikes me as slightly nuts”

Think of it by the numbers; a bee, Goulson says, feeds itself, reproduces relatively easily, and can visit about 1,000 flowers a day. There are about 40,000 bees in a hive, and about 80,000 honeybee hives around the world. That’s a lot of bees, and a lot of pollination.

But that’s also just one species of bee. There are about 20,000 bee species in the world, all pollinating flowers and crops somewhere or other. And then there are other important pollinating animals, like bats, flies, mosquitos, and other creatures.

“To replace them all with little robots would bankrupt the entire global economy, even if you could make them very cheap,” Goulson says.

Other, smaller robot bee designs have been proposed and are still in the works, but hopefully we’ll never need them to replace bees entirely.

People can take action to preserve bee populations, Goulson says. Planting more flowers and leaving more pollinator habitat available, like the bee highway in Oslo can give bees more food and more freedom to move. Using fewer pesticides will help existing populations stay healthy, and testing bees for diseases before they are moved to different locations around the world can prevent bee epidemics.

Even if bee bots are really cool, “There are lots of things we can do to protect bees instead of replacing them with robots,” Goulson says.