Atomic Gardens, the Biotechnology of the Past, Can Teach Lessons About the Future of Farming

When radioactive tomatoes were the crop of the future 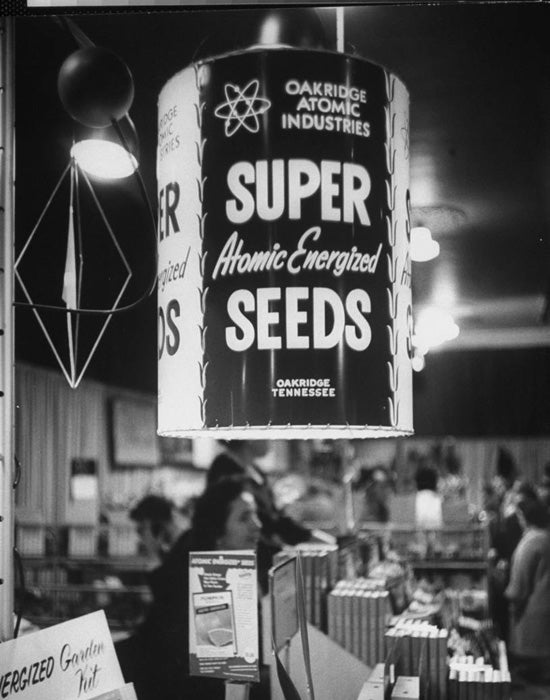 One look at the wedge-shaped rows of plants and anyone could tell the circular garden was not grown under normal conditions. Plants sown in concentric circles displayed wildly different vitality and viability.

The innermost circle of plants, gathered around a central pole, were dead; slightly farther away, the plants were stunted and tumor-ridden; and past that, the plants may have looked right, but possessed strange new mutations.

It was the latter part of the archetypal “gamma garden” that most interested plant researchers in the 1950s and 1960s. The central pole contained a radioactive source, commonly cobalt-60, so that scientists could see how the gamma rays affected plants.

Before scientists learned how to modify genes, they induced mutations with radiation. It was a sincere effort to feed the world, and amaze home gardeners, by modifying plants to have desirable traits.

“If we think of modern GM as taking a scalpel to the genome, mutation breeding by irradiation was a hammer,” she says. The full interview is well worth a read; click through to it here.

It’s an interesting tale in light of radiation and food safety concerns after the Japanese nuclear disaster. But there are also some interesting parallels between atomic gardening and 21st-century biotechnology, which also promises to feed the world by modifying plants to have new traits. The promises, and the controversies, feel very familiar.

Back in the 1960s, scientists bombarded plants with gamma radiation hoping to see beneficial changes in the plants’ structure and yield. Advocates included entrepreneur C.J. Speas and Englishwoman Muriel Howorth, who started the Atomic Gardening Society to promote mutated varieties. Johnson describes a dinner party in which Howorth served “NC 4x,” North Carolina 4th generation X-rayed peanuts that were produced from seeds exposed to 18,500 roentgen units of X-rays. After the party, Howorth planted the irradiated seeds and they grew like magic beanstalks.

Journalists and sightseers came to visit the mutant plant; garden writer Beverley Nichols called the peanut the “most sensational plant in Britain.”

“To me it had all the romance of something from outer space. It is the first ‘atomic’ peanut. It is a lush, green plant and gives you a strange, almost alarming sense of thrusting power and lusty health. It holds a glittering promise in its green leaves, the promise of victory over famine,” she wrote, as recounted on Johnson’s blog.

As with modern biotechnology, industry was the main driver behind the new plant modifications. Two modern cultivars are the result of atomic gardening, Johnson says — most of the world’s mint oil, used in toothpaste, chewing gum and more, comes from the “Todd’s Mitcham” peppermint cultivar, which is resistant to a fungus. It was produced in radiation gardens at Brookhaven National Laboratory. And the “Rio Star” grapefruit varietal, which Johnson says accounts for three-fourths of grapefruit production in Texas, is another atomic mutant bred for its dark red flesh and juice.

Gamma garden research was conducted in the U.S., Sweden, India and other countries in the 1960s, leading to untold numbers of new plant varieties. But s far as Johnson can tell, the entrepreneur Speas was the only source for home gardeners to buy irradiated seeds. Seed packets depicted robust flowers and vegetables, calling them “atomic-energized” and offering an interesting definition of what radiation does — “gamma rays tend to shake up the normal balanced system of the embryo inside the plant.” 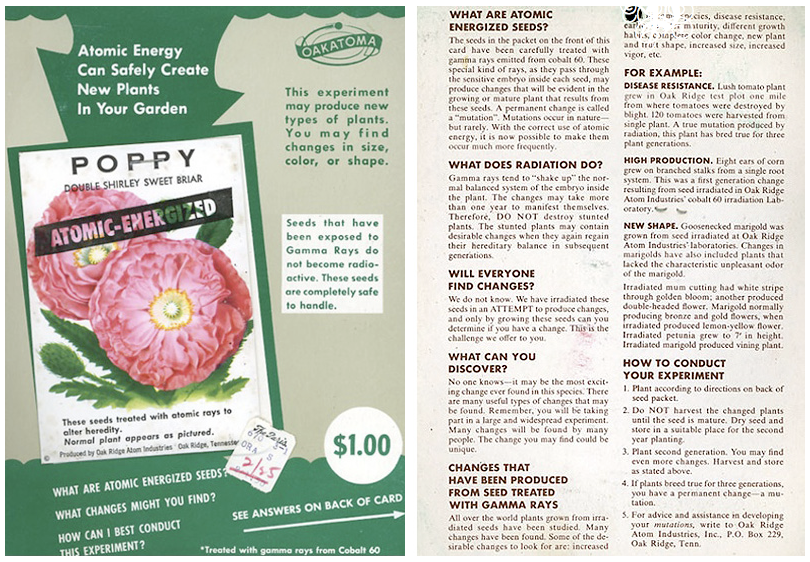 The seed packet advises gardeners that it may take more than a year for mutations to manifest themselves, and therefore not to destroy stunted plants: “The stunted plants may contain desirable changes when they again regain their hereditary balance in subsequent generations.”

Eventually, as scientists and the public grew to understand the dangers posed by radiation exposure, gamma gardens fell out of favor. The notion of irradiated plants feeding a hungry world soon wilted, too.

Decades later, scientists would figure out how to make much more precise mutations, inserting new genes and switching them on to make plants do things they couldn’t do before. But this method has its own detractors, some of whom would argue genetic modification is just as bad for health and the environment as radioactivity research.

We know much more about biology today than we did in the 1960s. But will future generations look back on genetic modification like we reflect on atomic gardens, with an amused sense of nostalgia illuminated by hindsight?