‘Glider trucks’ are pollution machines, but they might roll past EPA regulations

Old, inefficient engines inside new frames have been sneaking through a regulatory loophole that the EPA was supposed to be closing. 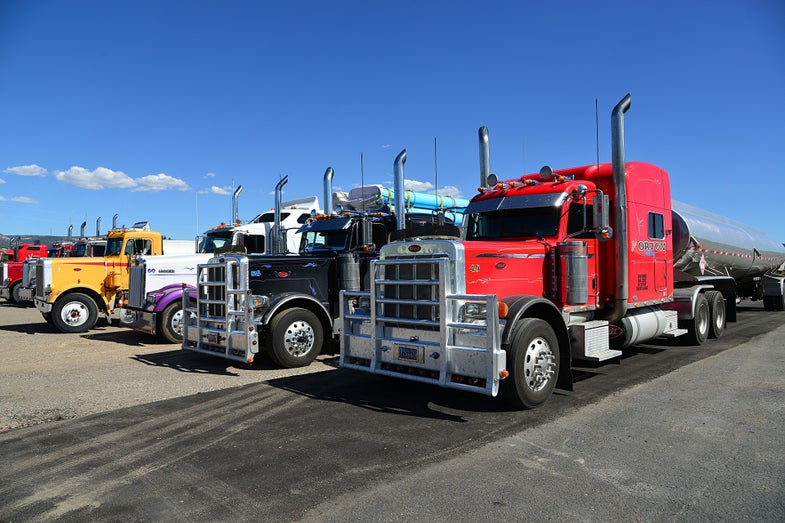 Update: The EPA withdrew its “no action assurance” on July 26, following a stay from the court

Leading up to the Trump administration, the Environmental Protection Agency had been on track to regulate a group of highly polluting freight trucks called gliders or glider kits.

Compared to conventional new trucks, glider trucks—rebuilt from old, salvaged diesel engines fitted into new frames—emit approximately 55 times more soot and other fine particle pollution associated with a higher risk of asthma, lung and heart disease, and premature death, according to the EPA’s own analysis.

As such, the number of glider kits in the truck fleet jumped from under 1,000 gliders before 2010 to more than 10,000 in 2015. And though glider trucks made up about two percent of heavy-duty truck sales in 2014, the EPA estimates they accounted for about 50 percent of the air pollution from all trucks.

To close this regulatory loophole and protect public health, the EPA finalized a rule in 2016 requiring glider kits to meet the model year emission standards according to the year they’re assembled, not the year the engine was manufactured. However, the EPA gave glider kit manufacturers some lead time before they capped the number of rule-exempt gliders that small businesses could produce to less than 300. That rule kicked into effect in January 2018, but by then the Trump EPA had already started dismantling it.

In November 2017, the Trump-era EPA reversed course on regulating glider kit emissions after lobbying from manufacturers led by Fitzgerald Glider Kits, which bills itself as North America’s largest assembler of glider trucks. Fitzgerald, which says it produces more than 3,500 trucks each year, also hosted Donald Trump at one of its dealerships during his presidential campaign and paid for a study that former EPA administrator Scott Pruitt used to justify repealing the 2016 rule. The study is now being scrutinized for scientific misconduct.

Then, in the eleventh hour of Pruitt’s tenure at the EPA, the agency announced July 6 it would suspend enforcement of the 2018 cap limiting glider kit production. For Fitzgerald, that could mean an additional 3,200 gliders sold this year.

The last-minute action expedited what EPA was already planning to do by repealing the rule, but circumvented the regulatory process, causing a further uproar in the environmental community and among states.

On July 13, a coalition of thirteen state attorneys general called the de facto suspension “a sweeping abdication of [the EPA’s] statutory responsibilities” in a signed letter asking EPA to enforce glider kit production quotas, or face them in court.

The EPA is only supposed to use its enforcement discretion to avoid endangering public health and the environment, the letter says. “Here, EPA’s action does not avoid such risks, but instead creates them.”

A few days later on July 17, three environmental groups petitioned the D.C. Circuit Court of Appeals to postpone the EPA’s “no action assurance” to glider kit manufacturers. The court granted their petition on July 18.

By the EPA’s own analysis, taking 1,000 glider trucks off the road could prevent 160 premature deaths due to air pollution, says Paul Billings, the American Lung Association’s senior vice president of public policy.

Without a quota on gliders, “you can see that a few years of additional sales of these trucks are going to lead to a lot of premature deaths,” Billings says. “It’s not consistent with the role EPA is supposed to play.”

A number of heavy duty truck manufacturers including Volvo, Cummins, and Navistar which have invested in modern pollution control technologies to meet emissions requirements, also support regulating glider emissions. They want to see EPA close a loophole that currently gives glider trucks, which cost less to produce and aren’t always subject to a 12 percent sales tax, a competitive advantage over their trucks.

“Our industry has made great strides in the last decade,” wrote Jim Maddox, president of Tri-State Truck Center, a heavy-duty truck dealership in support of glider kit regulations. “Not only are our trucks the cleanest running they have ever been, but also safer that they have ever been. Let’s put everyone on the same playing field and continue the progress we have been making.”