Koala genes might reveal how they survive a toxic diet 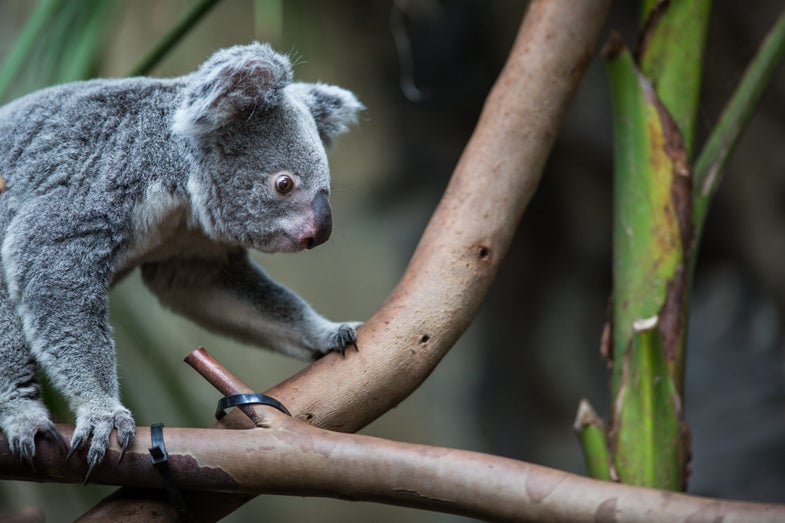 With their fuzzy gray bums and adorable faces, koalas are one of Australia’s most iconic megafauna. A new paper published today in Nature Genetics documents the sequencing of the critter’s genome. Peering into the koala’s genes offers researchers insights into how it survives on its (toxic) diet of eucalyptus, and will help them figure out how to save this endangered cutie. The paper’s findings offer evidence for why having a complete genome for endangered animals can help shape conservation decisions.

Rebecca Johnson, founder of the Australian Centre for Wildlife Genomics and an author of the new paper, says the koala’s genome took priority for a few reasons: it’s one of Australia’s most recognizable animals, its day-to-day life is only somewhat understood, and it’s endangered by threats that have yet to be fully understood or controlled.

“Koalas are an iconic marsupial mammal,” University of Connecticut biologist and paper author Rachel O’Neill told Popular Science in an email. Because they’re so recognizable, they’re a great species to use to educate people about things like genomic conservation, she wrote. The genome sequencing effort also has direct conservation implications. The two central threats to koalas: a distributed population and disease—can be helped by deeper understanding of their genes.

Estimates of the current population of koalas vary from 100,000 to 600,000, Johnson says. Throughout their range, koalas vary in size and coloration, which at one time led them to be classified as three different species. But despite these phenotypic differences, she says, analysis of koala genes from across their range shows that they are one species after all.

Because of their wide distribution, she says, “They’re really complicated to manage from a conservation perspective.” The koalas found in southern Australia have a high rate of inbreeding, but a large population. That situation is very different from the one faced by those in the north, where “they’re constantly losing habitat or they’re having roads built through their populations,” she says, but “they’re quite genetically diverse up there.”

Viewing them through the lens of genomics offers new conservation possibilities, she says. If the genetic diversity in the south gets low enough and can’t be resolved in other ways, for instance, Johnson says it might be possible to introduce genetic diversity using koalas from the north. Both the Florida panther and the Tasmanian devil have benefited from these kinds of interventions.

But the team’s goals went beyond the relatively simple genetic analysis required to evaluate genetic diversity among the koala populations. “Because they’re such a specialized animal, [and] they have such specialized adaptations, we just thought it would provide some really interesting insights into how koalas are koalas,” Johnson says.

The fuzzy grey quadrupeds, who are unrelated to bears in spite of their common name, are unique among marsupials. Their closest modern relative is the wombat, but koalas and wombats diverged genetically millions of years ago. In that time, koalas climbed the trees and learned how to eat something almost no other creature eats: eucalyptus.

“Through taste and smell, the koala also has the apparent capacity to evaluate leaves on the basis of bitterness and water content; presumably they use these discriminatory powers to choose accordingly,” geneticist James Andrew Woody, who was not involved in the study, wrote in an email to Popular Science.

Though eucalyptus and its relatives are toxic to most animals, koalas have evolved to subsist primarily off its leaves—according to the Australian environmental agency’s website, koalas eat the equivalent of a small head of lettuce worth every day. Koala guts contain specific microbes that help with this process, but the study shows that they also have more genes related to producing detoxifying enzymes that help in digestion than most animals. Koalas also get much of their water from the leaves they eat: by looking at the genome, researchers pinpointed how they select the juiciest targets using smell and taste receptors. All this information will help them understand how to help the koala survive.

Besides habitat loss, dangerous people and dogs, and possible genetic bottlenecks, koalas face two other threats that are perhaps their most serious: chlamydia, which likely entered their population from domesticated sheep, and Koala retrovirus. Understanding the genes that underlie their responses to treatment might help researchers develop effective method for fighting these ailments.

“Long-term survival of the species depends on understanding the impacts of disease and management of genetic diversity, as well as the koala’s ability to source moisture and select suitable foraging trees,” the paper reads.

Woody said the paper’s results results underline the fact that “like most vertebrates, we need large koala populations to maintain genetic diversity and these need to be connected via habitat corridors to encourage natural gene flow.”