They also might be better equipped to adapt to climate change. 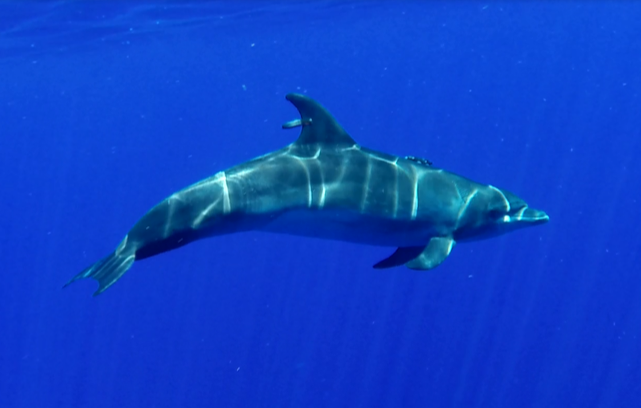 Near the islands of Bermuda, a bottlenose dolphin with special sensors suction cupped to its fin dove deeper, and deeper…and deeper. Thirteen minutes later, it finally came up for air after diving 1,000 meters—a distance greater than the tallest building in the world—into the depths of the Atlantic Ocean in search of food.

The deep dive surprised physiologist Andreas Fahlman. The species’ coastal cousins in Florida typically keep their grocery runs short and shallow, usually diving no more than 10 meters. In 1965, “Tuffy” the dolphin was trained by the U.S. Navy to dive 300 meters, but Fahlman says coastal dolphins wouldn’t be capable of making an 1,000 meter dive like the offshore dolphins of the same species.

“The questions is, how far can you stretch physiology for the same species to live these completely different lifestyles?” Fahlman wanted to find out.

Initially, he assumed the athletic, offshore dolphins would have a different lung structure or lower metabolic rate (which would help conserve energy for these daring descents) compared to the coastal “couch potato” dolphins. But his study’s findings showed neither was the case: both dolphin populations appeared to be exactly the same.

Perplexed, he conducted a follow-up study—the pair of studies were published this week in the journal Frontiers in Physiology—and came up with a new hypothesis: the difference was in their blood.

Dolphins may also store oxygen in their muscles the same way whales do via myoglobin, an oxygen-carrying protein found in muscle cells. Not only did the Bermuda dolphins have more red blood cells, but Fahlman suggests they can also manipulate blood flow to protect themselves during deep dives. Fahlman says the coastal dolphins likely possess the same ability, but sticking to shallow waters means they wouldn’t have a reason to do it as often.

Like scuba divers, dolphins are at risk of decompression sickness, more commonly known as “the bends.” When you dive with compressed air, nitrogen diffuses into the bloodstream. It’s critical to swim back up slowly so the gas can dissolve naturally. If you surface too quickly, the sudden drop in pressure causes nitrogen bubbles to form in the blood, which can cause joint pain, dizziness, difficulty walking, or in extreme cases, lead to a coma or death.

Past studies have shown it’s the dolphin’s unique lung structure that keeps them safe from sickness. These clever sea creatures have collapsible lungs; when put under immense pressure—like a 1,000 meter plunge—one lung compartment collapses, and the other stays open to allow for gas exchange. Fahlman’s theory is that dolphins are able to reroute blood flow to the collapsed compartment, which would restrict the buildup of nitrogen bubbles.

“We’re suggesting they’re using completely different ways of managing gases, not just relying on collapsing the lungs as previously suggested,” Fahlman says. “Unlike land mammals, they can send blood to regions of the lungs that are not exchanging gas.”

Researchers haven’t figured out why offshore dolphins embark on such extreme deep sea journeys in the first place, but Fahlman says it may have to do with shifts in where prey can be found due to global warming. That deep down, at least dolphins still have access to meals that lurk far beneath the surface, like squid.

However, Fahlman says this power to plunge could give dolphins the upper fin on climate change—unlike other ocean animals facing extinction whose environments continue to disappear.

“There’s a lot a dolphin can do to survive,” he says. “No matter how much we damage the environment, they can adapt a lot of things they’re doing and still survive.”