Dr. Seuss might have written the Lorax after seeing these creatures in Kenya

Seeing these mustachioed monkeys during an episode of writer’s block gave Theodor Seuss Geisel the inspiration he needed to write his memorable ecological fable. 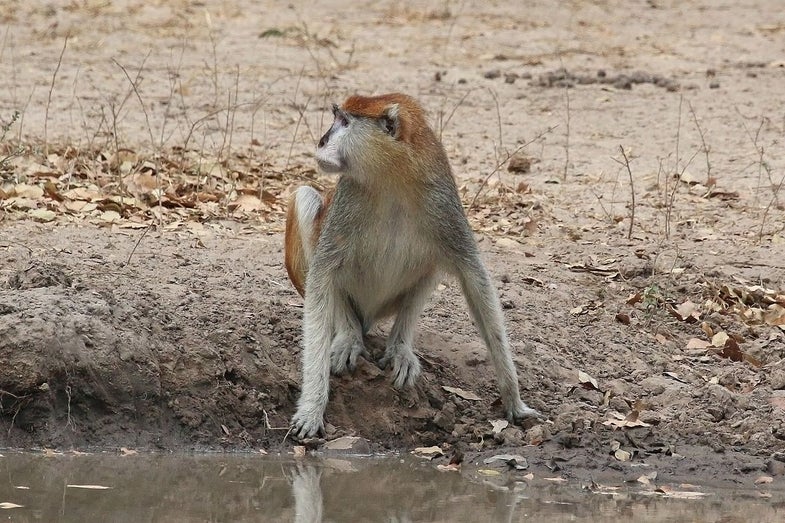 He is the Lorax. He speaks for the truffula trees. His origins are never explicitly addressed in the illustrated children’s book that bears his name, but new research reports that his tubby poise was inspired by a real animal—the patas monkey—and the monkey’s bond with a real tree, the whistling thorn acacia. In fact, the research argues, it may have even been their close relationship that got Theodor Seuss Geisel, known to generations of children as Dr. Seuss, to write it.

The story of this research begins at a Dartmouth College faculty dinner, where evolutionary biologist Nathaniel Dominiy ended up sitting with renowned Seuss expert Don Pease. The biologist says he was at a bit of a loss for what to talk about, but thankfully, “I have two kids… and so I’m pretty familiar with Dr. Seuss’s work.” One thing he’d noticed in the course of his fieldwork in Kenya: a monkey found near Mount Kenya, the patas monkey, bore a strong resemblance to the fictional Lorax. What Dominiy didn’t know was that Dr. Seuss had once visited a resort in that part of Kenya—in fact, he actually wrote most of the Lorax there after suffering from a prolonged bout of writer’s’ block.

Initially, says Pease, he was skeptical of the idea that the monkey may have inspired Seuss. By late 1970, when Seuss started writing The Lorax, he’d been creating illustrated books full of fantastical characters and absurd made-up words for more than three decades. He had plenty of wondrous characters to draw from, and there was no reason to think he’d look elsewhere.

“But then, I thought about what it might add to the established understanding of the Lorax,” Pease said. A common perception of the Lorax is as a grouchy environmental crusader or “eco-policeman” who comes in from outside to “speak for” an environment in which he has no stake.

But if the Lorax’s relationship with the truffula trees mirrored that of the patas monkeys and the tree from which they derive more than 80 percent of their food, he was both an advocate for the environment and as much part of it as the Bar-ba-loots, Swanee-Swans and Humming-Fish who rely on the truffula ecosystem. Then the message becomes, “Human beings should understand themselves as a part of the environment,” Pease says. After all, as climate change fundamentally alters our planet, we’re all in the same straits as the Lorax and his fellow creatures.

Pease and Dominiy embarked on a quest to assess whether the patas monkey may have inspired Seuss, using facial analysis. They compared the Lorax’s whiskery mug to five Kenyan monkeys and another Seuss creature commonly cited as an antecedent. The method they used, Eigenface analysis, compares images by looking for facial features and calculating their relationship to one another. Faces with more similar relationships look more similar to one another. In this case, they found that the Lorax’s face is more like those of three of the monkeys, including the patas monkey, than that of the other Seuss creature. Furthermore, the researchers write, “even the voice of the Lorax (a ‘sawdusty sneeze’) resembles the ‘whoo-wherr’ vocalization of patas monkeys.”

“We also know that he was very impressed by the local trees,” says Dominiy. The patas monkeys and the whistling thorns have what’s known as a commensal relationship, where the monkeys prune and maintain the trees, which provide their main sources of food. Because of these attentions, they have an odd, scrubby, tall appearance.

In 1971, when The Lorax was first published, the modern American environmental movement was still in its infancy. What Seuss wrote down, teaching generations of children, was the basis of what’s known as a “trophic cascade,” says Dominiy. In other words: “When you remove a piece of the community, the rest of that community starts to fall apart.” These might seem like obvious concepts today, but at the time, they weren’t understood outside academia, he says. Seuss helped to change that.

Although these things may have inspired Seuss, patas monkeys and whistling acacias have not yet suffered the dismal fate of the truffulas and the creatures who relied on them, says primate ecologist Lynne Isbell. Isbell, who was not involved with this paper, has worked extensively with patas monkeys in the past. The monkeys aren’t yet endangered, she says, but their ecosystem is not as stable as it once was. The monkeys are losing food and habitat as the human population expands into a landscape that can’t even support the current level of human incursion. In this case, a major factor are local people, who rely on charcoal made from the acacia, cutting the trees down to make fuel.

“Unless people can find some better fuel source… I don’t see much hope for [the patas monkeys],” she says. And, just like the character they inspired, the monkeys don’t control the fate of the trees. The conservation of this habitat can only come at the behest of the people who live there. In other words; Unless someone like you cares a whole awful lot, nothing is going to get better. It’s not.