The Bronx's stinkiest resident will only blossom for a day or so. 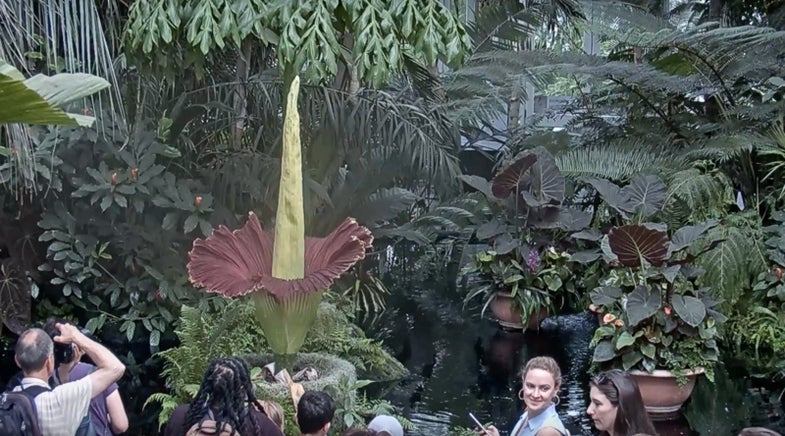 Last week, the New York Botanical Garden made it known that its newest corpse flower—Amorphophallus titanum—would soon unfurl its frilly spathe and fill its surroundings with the scent of sweet, sweet rotting flesh. A specimen spends nearly a decade shoring up the energy it takes to bud and flower, so NYBG’s horticulturalists waited like expectant parents for the process to begin. On June 1, they started to hope. On June 21, they shuttled the corpse flower from its secluded home in the Nolen Greenhouses to a primetime location at the Enid A. Haupt Conservatory. A constant livestream allowed folks to watch all around the world as the plant matured, and on the evening of June 26 the flower finally bloomed.

NYBG’s last corpse flower bloomed in 2016, and it may be several years before one of their other specimens is ready to open up. The species spends most of its time under the ground, growing shoots every year or so. But when it flowers (about once every decade) its frilly spathe—which is actually a modified leaf—turns bright red and flops open like a big ol’ flower framing its spadix (the white spike in the center). While that unfurling leaf looks like a flower in and of itself, it’s actually just surrounding clusters of tiny flowers around the spadix. Male and female flowers blossom on a staggered schedule to prevent self-pollination, and meanwhile the spadix gets warm (about as hot as a human body, in fact) to spew a noxious odor out into the air. Well, noxious to humans—it’s usually compared to the stench of rotting meat, or at best the essence of some very sweaty socks—but quite sexy to carrion beetles, which come in search of a decomposing meal and leave with corpse flower pollen in tow, hopefully having deposited some from another Amorphophallus titanum during their visit.

That pollination technique won’t work in the Bronx, which is far from the corpse flower’s native ecosystem in Indonesia. Instead, botanical gardens around the world have their workers carefully collect and store the pollen from each corpse flower bloom, ready to pollinate the next corpse flower and continue the stinky cycle.

If you want to know more about the corpse flower’s lifecycle, I highly recommend this Q&A from Cambridge University written in the first person, from a corpse flower’s perspective.

Corpse flowers only bloom for 24 to 36 hours, so it’s possible that Wednesday is your one and only chance to see (and smell) the process in action. The NYBG, located in the Bronx, will be open for extended hours today (until 10 p.m.) to allow as many people as possible to visit the stinker. And if you can’t make it there to see the corpse flower in person, just check out the livestream—and be glad you’re not watching it in smell-o-vision.