These tiny tree shrews can handle hotter peppers than you

And now we know why they can handle the heat 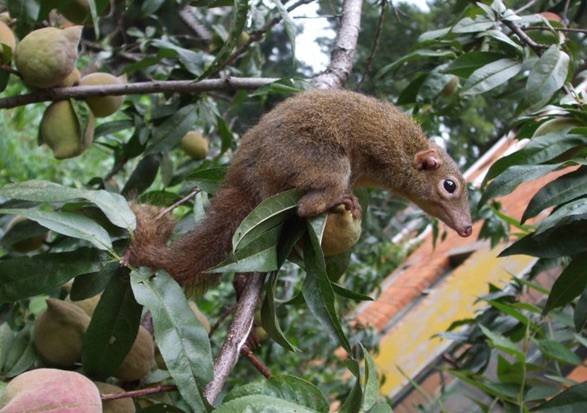 Most mammals don’t want anything to do with spicy foods. Capsaicin, the chemical that makes chili peppers hot, ignites mammals’ pain pathways, causing a variety of effects. Spicy food doesn’t hurt you directly–it’s not poison–but your body thinks it’s getting real burns and reacts accordingly. Mammals who aren’t us steer clear of the things. But not so for Northern Tree Shrew.

These brown-gray mammals are less than 10 inches long, but Chinese Northern Tree Shrews have been observed actively eating chili peppers, something many fully-grown humans couldn’t manage. A group of Chinese scientists set out to find out why the tree shrew could handle the heat: their study, published July 15 in the journal PLOS Biology, reveals the answer is a genetic adaptation. It partly blocks receptors in the tongue and elsewhere, by producing a different amino acid that makes it hard for capsaicin to bind to the receptor. That binding allows the receptor to signal the brain capsaicin is hot. In other words, spicy food really is less spicy to these little guys.

The researchers, who hail from the Chinese Academy of Sciences and Zhejiang University, tackled the puzzling question of the tree shrew’s heat-loving ways from several angles. They conducted genetic tests, comparing the tree shrew to other mammals it shares abundantnumerous genetic information with–humans among them. They also conducted lab experiments comparing wild tree shrews and wild mice. What they found was that tree shrews actually seem to like chili peppers (mice, however, do not).

The team also tried to figure out why a mammal would evolve to like spicy food in preference to all the other options out there–particularly because chili peppers have only been grown in China for less than 400 years, while the Northern tree shrew has been there for millions. (Birds also eat ripe chili peppers, but they don’t have the same pain receptors as mammals and don’t notice the burn.) They hypothesized that a native plant (Piper boehmeriaefolium) which produces a substance, Cap2, that activates the same pain receptors as capsaicin, must be the culprit.

The Northern Tree Shrew and Piper boehmeriaefolium “could well be coevolved,” says evolutionary biologist Nathaniel Dominiy. Dominiy, a professor at Dartmouth College, studies tree shrews but was not involved in the current study. It’s possible that, like birds, the tree shrews evolved to eat the peppers because they are nutritious if you can get past the Cap2, while the peppers rely on the tree shrews as a method of distributing their seeds.

“That’s what’s so cool about tree shrews,” he continues. Known as “living fossils,” the mammals–which are not shrews at all but belong to the same taxonomic class as primates (and therefore, humans)–hasn’t evolved very much in millions of years. That evolutionary sameness very likely bought them the time to form “incredibly exquisite relationships with…plants,” Dominiy says.

This is just the newest newsworthy finding about tree shrews’ relationships with plants. Research going back to 2008 has found unusual coevolved adaptations in tree shrews. In that year, researchers found that pen-tailed tree shrews in Malaysia evolved to drink large amounts of alcoholic nectar without getting drunk, pollinating the plant in the course of their travels. A 2010 study found that mountain tree shrews in Borneo actually have a mutualistic relationship with three species of meat-eating pitcher plants–they poop in the plants, which benefit from the introduced nitrogen.

A recent spate of interest in tree shrew biology has yielded fascinating information about how these creatures exist in the wild, says Dominiy. These relatives of ours remain mysterious, and there’s plenty more to learn.