Don’t get too hyped about ‘Planet 10’ just yet

Another day, another hypothetical object on the outskirts of the solar system. 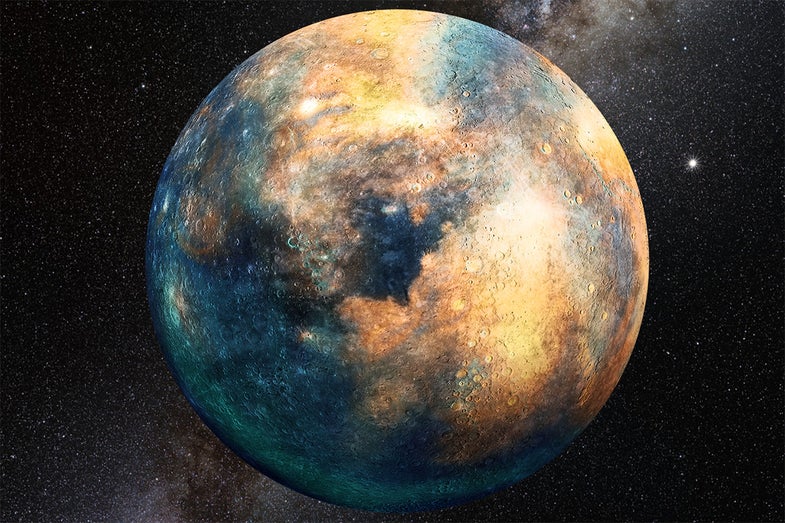 An artist's illustration of a hypothetical planet out in the boonies of the solar system. Heather Roper/Lunar and Planetary Laboratory
SHARE

After Pluto got demoted in 2006, we were back to being a boring old eight-planet solar system. Then, last year, astronomers announced they’d found hints of a hidden ninth planet in the outer solar system. Scientists are still trying to figure out whether Planet Nine really exists, and now it seems they’re already speculating about a TENTH planet, also dark and mysterious–and possibly not actually there. What a whirlwind.

In a paper in the Astronomical Journal, planetary scientists Kat Volk and Renu Malhotra from the University of Arizona suggest there may be another planet hidden on the outskirts of the Kuiper belt. If it’s there, they think it could be similar in mass to Mars and Earth, orbiting the sun at a distance of about 60 AU. That’s 60 times the distance between the sun and Earth.

Planet Nine, by contrast, may be 10 times the mass of Earth, circling the sun from as far as 700 AU.

Out beyond Neptune, the Kuiper belt is a huge, crowded ring of icy junk leftover from the formation of the solar system, like comets and dwarf planets such as Pluto. And in fact, if the hypothetical Planet Ten is as small as the scientists think it is, it may not have enough gravity to clear its orbit of debris, which is one of the requirements necessary to be considered a planet. That was the same problem that got Pluto in trouble 11 years ago. If it hasn’t cleared its path around the sun, Planet Ten could be just another dwarf planet, a second-class planetary citizen who doesn’t get a ton of respect.

For now, Volk and Malhotra have only seen the gravitational footprints of a possible hidden planet–nobody’s laid eyes on the real thing. They think it’s there because something’s tilting the orbits of distant Kuiper Belt Objects (KBOs) out of whack.

KBOs orbit in a mostly flat disk around the sun. Some orbits are tilted a few angles this way or that, like the rim of a jaunty hat, but overall the orbits average out into a flat plane. That’s for most of the Kuiper belt. Studying more than 600 KBOs, Volk and Malhotra found that the most distant objects in the belt average out to a plane that’s tilted by eight degrees. So something is warping the orbital plane of the outer solar system.

“The most likely explanation for our results is that there is some unseen mass,” Volk said in a statement. “According to our calculations, something as massive as Mars would be needed to cause the warp that we measured.”

But there’s also a chance that the warp could be caused by more than one object, the authors note, or that a passing star could have skimmed by and caused gravitational disturbances in the outskirts of the Kuiper belt.

How could scientists have overlooked a Mars-sized planet in our own solar backyard all this time? Well, the solar system is a big place, and we haven’t fully mapped it out yet. And if the planet is lined up with the plane of the galaxy, the multitude of stars could make it hard to pick out.

It will likely take years of research to determine whether Planets Nine and Ten are really out there. The Outer Solar System Origins Survey is currently searching for and tracking thousands of distant objects, and Malhotra is optimistic that the Large Synoptic Survey Telescope (LSST), slated to come online in Chile in 2020, will help to narrow the search.

“We expect LSST to bring the number of observed KBOs from currently about 2000 to 40,000,” Malhotra said. “There are a lot more KBOs out there — we just have not seen them yet. Some of them are too far and dim even for LSST to spot, but because the telescope will cover the sky much more comprehensively than current surveys, it should be able to detect this object, if it’s out there.”