You probably abuse your ice cream. Here’s how to stop.

And other odd information from ‘ice cream boot camp’ 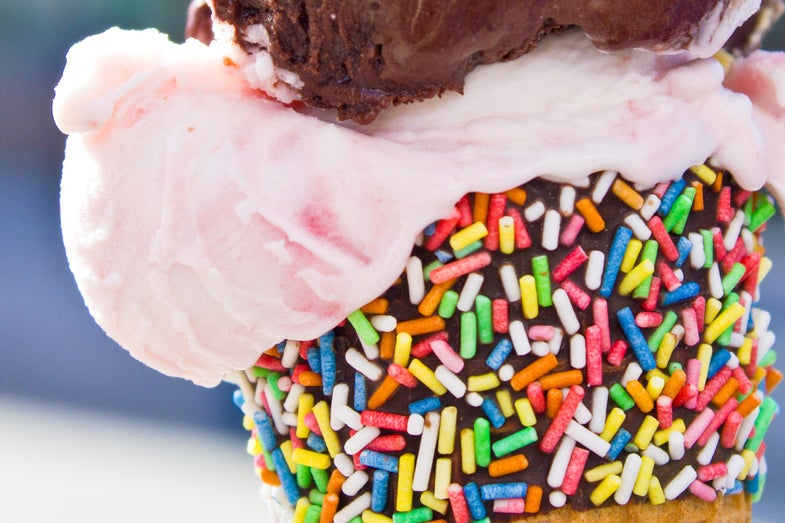 The first time I tried to make ice cream, I forgot to add the cold.

Friends had just given me a free ice cream machine and I was hyped up on the thrill of being able to make ice cream in my own kitchen. I read the recipe over and over, but neglected to read the directions to the brand-new appliance quite as carefully. After 40 minutes spinning in the machine, my cream contained no ice, and was just a well-stirred, soupy mess.

Turns out, I forgot to put the freezer bowl in the freezer before sticking it in the machine. These days the bowl maintains a permanent residence amidst frozen dumplings and ice cube trays, but I’m still a novice when it comes to ice cream making. My few attempts have ended with ice cream that tastes great, but often has something just slightly off in the texture department—too grainy, too hard, or too, uh, completely liquified.

Luckily, I’m not alone. “I’m sort of an impatient person,” Amy Ettinger laughs on the phone. Ettinger is an ice cream enthusiast extraordinaire and author of Sweet Spot: An Ice Cream Binge Across America. She’s had her share of icy mishaps, including impatiently pouring her ice cream base into the machine after only an hour (it should sit in the refrigerator at least overnight), but in researching her book, she’s learned a lot about the art and science of ice cream in America.

Much of her scientific knowledge of ice cream comes from her participation in what she lovingly refers to as ‘ice cream boot camp’—a shorter version of Penn State’s Ice Cream Short Course. The short course is a weeklong intensive program where hopeful ice cream entrepreneurs (and giant ice cream conglomerates) go to learn about the ins and outs of large-scale ice cream manufacturing. It’s been the go-to class for ice cream masters for the past 126 years.

Sitting in the short course when that fact was imparted, Ettinger says that her classmates were horrified. “There was this collective gasp,” Ettinger says. “As consumers, people have been shocked to find that many ice cream shops are not making their own ice cream base.”

That’s because of the laws governing ice cream bases. Ice creams have to be pasteurized to extremely strict standards by law to prevent deadly bacteria like Listeria from growing and making people sick. Pasteurizing machines can be hugely expensive if you don’t already have a dairy operation, so many homemade ice cream shops will simply buy their base from another company and personalize it with unique flavor.

The bases favored by ice cream makers are distinctly creamy, which can be a challenge in making homemade ice cream. Amateur attempts often seem to solidify into blocks of ice as soon as they hit the freezer.

Ettinger had that problem too. “Often homemade ice cream makers rely on the idea that you’re going to eat it right out of the ice cream maker,” Ettinger says. “But, if what you want is something you can have the next day or two days later, you can’t use the same recipe.”

That comes down to the chemistry of the ice cream mix. “Milk has a tremendous amount of water in it. It’s almost 90 percent water,” Ettinger says.

When you put that mixture of milk and sugar straight into a freezer, that water is going to turn to ice, and your once-fluffy ice cream will quickly solidify into an ice block.

The trick is powder. Adding tapioca or non-fat powdered milk to your mixture will absorb the excess water, leaving you with a more consistently creamy ice cream.

“That was another thing that classmates at the short course took issue with. People have a problem with powder,” Ettinger says. “But It’s been something that people have been used since the time of Marco Polo.”

Marco Polo did write in the 13th century about Mongol soldiers drying milk to a powder in the sun. But today, powdered milk isn’t just used as sustenance for soldiers. In ice cream, Ettinger says, “It’s about absorbing that water that can create those horribly large ice crystals. You don’t want large ice crystals that you can feel in your mouth.”

There are plenty of reasons not to bother with homemade ice cream. Maybe it’s because letting an ice cream maker take over your precious counter space doesn’t make sense in a tiny apartment. Or maybe you just don’t cook in the first place, and making your own ice cream sounds like torture when you can get pints of cherry garcia already made in any grocery store. That’s all fair. But whether made from scratch or bought in a carton, if you’re going to bring frozen deliciousness into your home, at least treat it with some respect.

According to Ettinger, one of the things that unites all ice cream makers is their effort to mitigate the horrors that people inflict on their product when they pick it up at the store.

“In the business, they call it freezer abuse,” Ettinger says. As it happens, when you open the door in the freezer aisle and stand there staring at the flavors, you’re harming all those precious treats. The same thing happens when you constantly open and close your freezer; Or worst of all, when you microwave your ice cream to soften it, take a scoop, and then put it back in the freezer. Those intense temperature fluctuations mess with the texture of the ice cream, sometime leaving you with crunchy ice crystals instead of a smooth, creamy texture.

Luckily, there is a solution that will get you softer, more scoop-able ice cream without endangering the rest of the container.

“Just take it out of the freezer and leave it on the counter for five minutes,” Ettinger says. Letting it soften gradually will help you scoop, and keep the ice cream’s texture at it’s peak for longer. It might not be instant gratification, but it will be worth the wait.