Is Vesta Actually a Planet Posing as an Asteroid?

The asteroid Vesta was first discovered two centuries ago, but until NASA’s Dawn spacecraft arrived there earlier this year and... 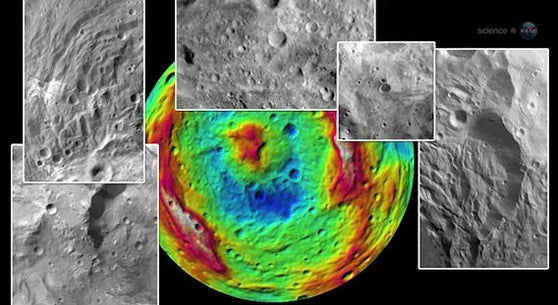 The asteroid Vesta was first discovered two centuries ago, but until NASA’s Dawn spacecraft arrived there earlier this year and began beaming back images and data, Vesta was seen as just another blurry, rocky satellite out there orbiting in the asteroid belt. Now, with Dawn’s instruments giving researchers their first really good look at Vesta’s composition and surface features, some astronomers are wondering if perhaps they haven’t discovered a small terrestrial planet rather than an asteroid.

The distinction between “dwarf planet” and “asteroid” is a bit nebulous and ultimately up to the International Astronomical Union. But in a post here last week we noted that the composition of Vesta is actually very similar to Earth’s–with separated layers like a core, mantle, and crust–suggesting that at one point in Vesta’s past it had a hot molten core that caused heavier materials (like iron) to sink inward while lighter materials flowed to the top.

This process is called differentiation, and it occurred on all of the terrestrial planets (Mercury, Venus, Earth, and Mars) in our solar system. Topographic characteristics like huge mountains and valleys, ridges, craters, and plains are lending further credence to this analysis. All told, Dawn researchers believe Vesta formed more like a terrestrial planet than the average asteroid.

That formation would’ve happened about 4.5 billion years ago at the same time the rest of the planets were forming. As Jupiter gathered mass, the gravity it exerted on the asteroid belt interfered with the coalescing of material there. Vesta was probably on its way to becoming a terrestrial planet before its growth was stunted. Still, it differentiated in its early life just like a planet, and the Dawn team is now looking for volcanoes and lava flows that it thinks were once present on Vesta’s surface (not to belabor the point, but the presence of volcanoes would be super Earth-like).