Pluto’s Surface May Be Alive Thanks To Planetary Antifreeze

Could icy slush be driving the dwarf planet's geological activity? 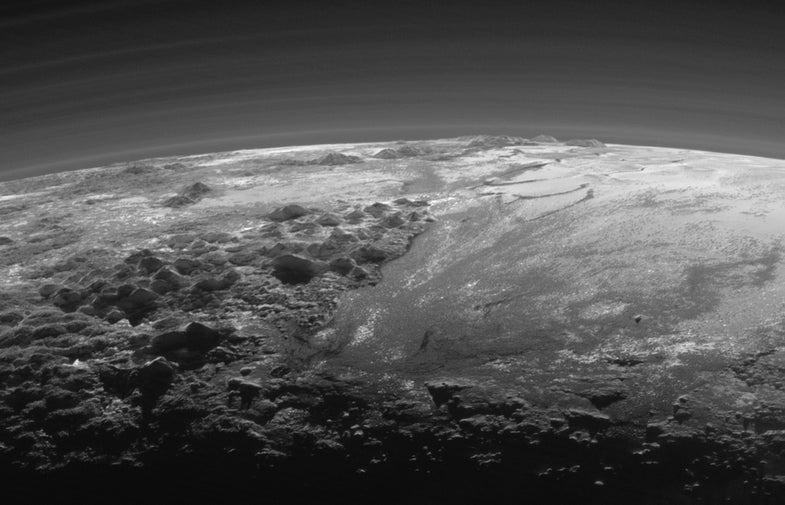 After the New Horizons spacecraft zoomed past Pluto on July 14, scientists were stunned at what it sent back. Photos show the dwarf planet dotted with icy mountains and smooth plains of ice, suggesting the surface may be younger than expected. If Pluto was the dead world everyone thought it was, it probably would have been flatter and pockmarked with craters.

Sometime in the past 100 million years or so, some force appears to have been building up those mountains and smoothing out craters, but scientists aren’t entirely sure what. It could simply be ice melting and refreezing, sublimating and getting re-deposited. Or, the New Horizons team speculates, the changes could be driven from inside Pluto–perhaps the tiny planet was still geologically active in recent times.

In a study presented yesterday at the meeting of the American Astronomical Society, scientists from Purdue University propose a way that the frozen world could have a moving interior.

On Earth, the continents and oceans float on a layer of molten rock. As the hottest magma from the Earth’s core heats up, it rises–just like the bubbles in a boiling pot of water–while cooler magma sinks. That motion shifts the tectonic plates, building mountains and smoothing out craters.

A planet’s geological activity is caused by heat left over from the formation of the solar system, as well as radioactive decay in the planet’s interior. Pluto, because it’s so small, was expected to have cooled off by now. But one thing Pluto has is antifreeze: ammonia, when added to water, lowers the temperature at which the water freezes, so the dwarf planet could potentially have liquid water existing at temperatures below 32 degrees Fahrenheit.

The Purdue scientists modeled how a mantle made of water and 5 percent ammonia might flow. “The ammonia lowers the viscosity of water ice by a factor of 100,000,” said graduate student Alex Trowbridge in a press release . “This would allow for the geologically active and vigorous Pluto seen in the New Horizon images.”

The findings fall in line with other recent work that suggests Pluto’s ice mountains may actually be frozen volcanoes that spew out a slushy mix of icy water, nitrogen, methane, and ammonia.

If Pluto does indeed have a slushy mantle, it still requires a hot core to make that mantle heat up, circulate, and reshape Pluto’s surface. How or why Pluto’s core might have remained active for so long remains a mystery.