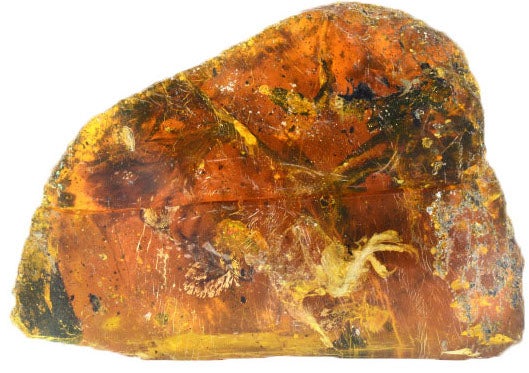 An ancient piece of amber is helping scientists figure out what birds looked like back when other dinosaurs still roamed the Earth. A recent study in Gondwana Research presents a tiny chunk of Burmese amber—fossilized tree resin—with an even tinier time traveler locked away inside. Some 99 million years ago, the sap trapped a newly-hatched bird before hardening.

The fossil, which includes two well-preserved feet, a head, neck, and a piece of wing, is the most complete of its kind, giving researchers an astonishingly good notion of what the baby bird must have looked like in life. That’s great news, because this chick comes from an intriguing time in bird history: Like all birds, the fossilized fowl is, in fact, a dinosaur. But while modern birds have the distinction of having outlived all other dinosaur lineages, we know that they evolved their distinct features before other dinosaurs had gone, well, the way of the dinosaurs—without turning into the winged, beaked little creatures that poop on our windshields today, they wouldn’t have survived the extinction events that wiped out their cousins. But when, how, and why did some dinosaurs turn all bird-like?

Our amber bird is a member of an extinct group of birds called enantiornithes—it’s not an ancestor of the birds that still exist today. But other than the (rather alarming) fact that many enantiornithes had teeth in their beaks and clawed fingers on their wings, they were pretty much the same as modern birds. So they represent an intriguing middle ground in the evolutionary trajectory of the last living dinosaurs.

And the researchers have already picked up a lot from the three-inch-long fossil: National Geographic reports that, based on the bird’s molting pattern, the team is confident that it was only a few days or weeks old when it died. But surprisingly, the bird—nicknamed Belone—already had its flight feathers. The fact that such a young bird was already equipped to fly suggests the species was “highly precocial”, the researchers wrote in the study. Modern birds—especially ones that live in trees, as Belone and its kind did—are born pretty helpless, and certainly don’t fly off on their own for some time. It seems that their extinct cousins may have taken a more hands-off approach to parenting (which might explain how poor Belone ended up dead inside a blob of sap.)

But while Belone is remarkably well-preserved—3-D reconstructions of its little body even show damage that might indicate a scavenger got to it before the tree resin did—we won’t be pulling any “Jurassic Park” antics.

“Unfortunately, DNA seems to be ‘off the menu’ for specimens such as this one,” study author Ryan McKellar, a paleontologist at Canada’s Royal Saskatchewan Museum, told The Washington Post. “To the best of our current understanding, DNA has a half-life of around 500 years and cannot be recovered in meaningful quantities from amber pieces that are more than a few million years old.”

Belone may have died young, but thanks to these researchers’ discovery, her species’ legacy will live on.