Dinosaurs got an evolutionary assist from huge volcanic eruptions 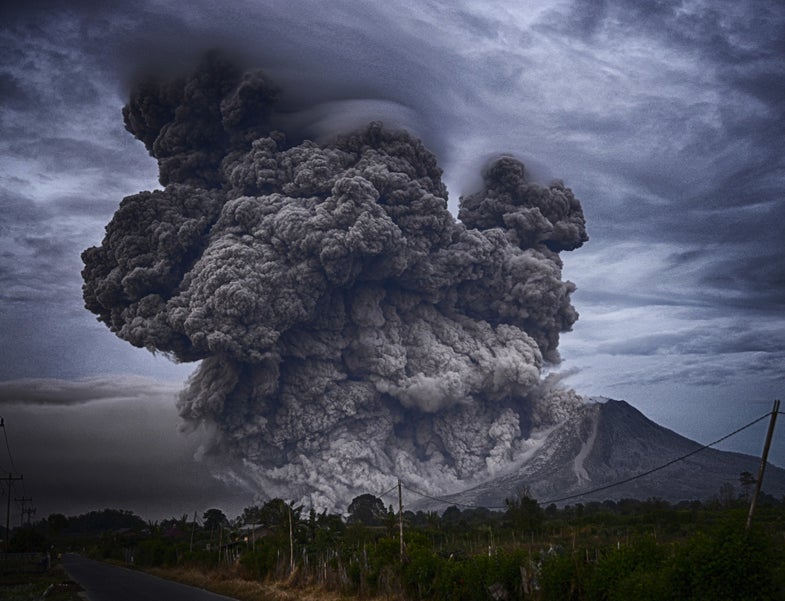 Humans rule Earth. We dominate every corner of the planet, to the point that we’re debating whether we have left a permanent classifiable mark on the globe.

But when it comes to the history of Earth, our dominion is merely a momentary tyranny built on the remnants of animals that lasted on our wet, volatile planet for millions of years longer than our paltry reign, from squishy mats of algae to segmented trilobites to dinosaurs.

Dinosaurs are arguably one of the most iconic groups of animals to ever walk the earth, but they didn’t dominate the world through sheer awesomeness. No, in a plot straight out of Game of Thrones, dinosaur ancestors managed to claw their way to greatness by climbing a mountain of bloodshed, aided by a force of nature. Only in this case, instead of winter coming, volcanic eruptions managed to put dinosaurs on the throne.

Of course, dinosaur ancestors weren’t actually plotting a Pinky and the Brain style world takeover. They were probably just chilling during the Triassic—eating food, sleeping, running away from things that wanted to eat them, making babies, etc. Then part of the world’s crust turned into lava, the environment got all messed up, all their competitors died, and the proto-dinos took their evolutionary shot.

In a study published in the Proceedings of the National Academy of Sciences, researchers looked at six different sites around the world. At each site, the geologists measured traces of mercury in sediments deposited in between thick layers of volcanic rock. They found elevated levels of mercury in five of the six spots, lending more weight to a long-standing theory that a massive extinction event at the end of the Triassic (roughly 200 million years ago) was caused by volcanic eruptions.

This massive extinction event devastated the life on Earth, wiping out about 76 percent of all species and leaving plenty of ecosystems wide open for opportunistic animals like early dinosaurs to move in and take over.

Geologists already knew that there was a lot of volcanism during that time. They had evidence from Morocco, Greenland, Argentina, Canada, the United States, and the United Kingdom (which were all smushed together hundreds of millions of years ago) that a massive volcanic system erupted around then, creating a vast area flooded with lava. The volcanic eruption likely happened in pulses, meaning that instead of one giant eruption, this area experienced numerous smaller—but still devastating—volcanic bursts over time. This may have also laid the groundwork for the eventual breakup of the massive supercontinent Pangea

But it’s not like the lava itself caused the massive extinction to happen. That was the result of some serious environmental changes that did serious damage to marine invertebrates, crocodile-like reptiles, and corals. Previous studies linked the timing of the volcanic eruptions to changes in the environment (spikes in carbon dioxide levels) that may have caused the extinction. The eruptions were so large they probably released large amounts of gas, including gaseous mercury, accompanied by carbon.

Mercury spewing out of a volcano isn’t uncommon even today (forest fires also release mercury into the air). In this case, the mercury in the sediment samples taken at field sites suggest that these particular eruptions released a whole lot of gas into the atmosphere. That lines up with other measurements that showed pulses of carbon dioxide being released over that same time period, suggesting to the authors that the changes in the environment at the Triassic-Jurassic extinction were due to volcanic injections of gas into the atmosphere over a period of about 200,000 years.

The hundreds of thousands of years with a fluctuating global climate (not to mention volcanic eruptions spewing lava out onto an area of 4.2 million square miles) put the brakes on any recovery of life, as 76 percent of species died away.

The survivors grew and thrived in the new environment, becoming Terrible Lizards, the feathery kings of the world—until an asteroid with bad timing shook up the planetary power dynamic again, paving the way for mammals to have their day.