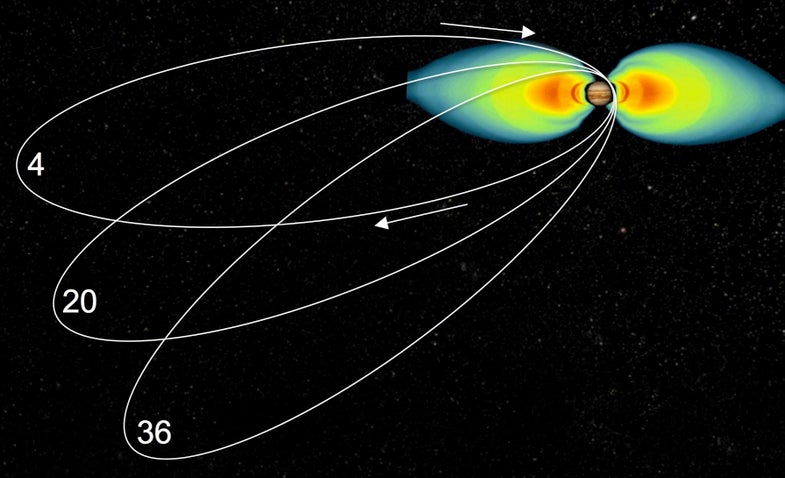 PASADENA, Calif. — The atmosphere here at NASA’s Jet Propulsion Lab is getting more excited and nervous as we draw nearer to getting confirmation as to whether the Juno spacecraft has entered orbit around Jupiter. Some of the team members have worked on Juno for more than 13 years, so the start of the science mission is a big moment for them. JPL just opened up the campus for the team members’ friends and family, and people are pouring in by the hundreds for this historic moment. Make sure to watch live here starting at 10:30, with the confirmation expected at 11:38pm Eastern.

Arguably the most beautiful planet besides our own, Jupiter is so bright in the sky that it’s often confused for a star. Jupiter even manages to outdo our star, the Sun, for biggest and baddest magnetic field, making it one of the most dangerous places to visit in our entire solar system.

Jupiter’s magnetic field is the largest structure in the solar system (besides for the heliosphere), stretching as far out as Saturn. When highly charged particles from the Sun run into this magnetic field it creates a type of secondary radiation event, breaking apart the particles even further. This environment is toxic to everything, especially spacecraft electronics.

Juno had to be specially designed to survive this environment by housing the sensitive instruments inside. “The Vault” is about the size of an SUV’s trunk and is made of half-inch-thick titanium to shield the spacecraft’s vital components from the radiation.

As we speak, Juno is closing in on the giant planet. As they rendezvous in space, Jupiter’s gravity will essentially grab onto Juno, pulling it into orbit, and (assuming the spacecraft survives the extreme blasts of radiation) the two will work together for the next two years.