Scientists try to unwrap the secrets of Egyptian mummy DNA

They might not have much in common with modern Egyptians. 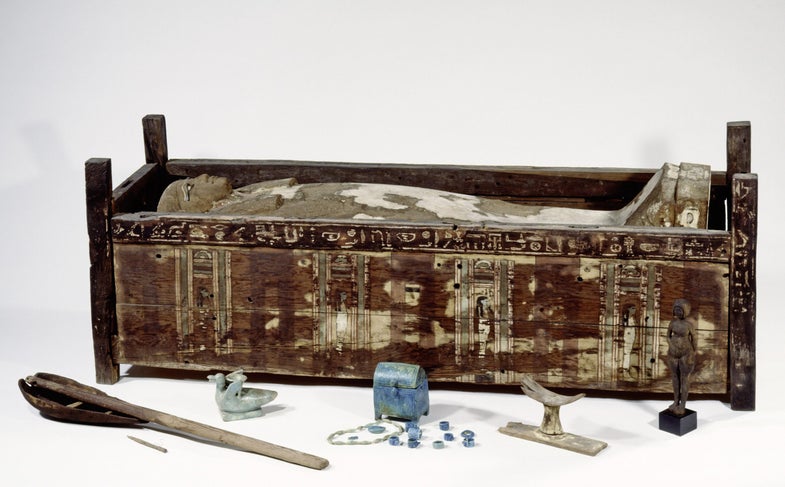 The Ancient Egyptians were famously fantastic at preserving their dead. But while their mummification methods helped protect soft tissues like skin from the ravages of time, the dry, hot climes that kept the deceased so pristine didn’t do their genetic material any favors. Heat might help desiccate a corpse before rot sets in, but it also speeds up the degradation of DNA. So while scientists have been able to stare into the faces of countless Ancient Egyptians, they’ve had a lot of trouble deciphering any of the secrets of their genetic legacy—until now.

Researchers publishing in Nature Communications believe they’ve conducted the first comprehensive genetic study on Egyptian mummies to avoid contamination. Their results suggest that modern-day Egyptians don’t have much in common, genetically, with those entombed in their homeland.

Archeologists looked at 151 mummified remains from all walks of life, from lavish priestly burials to simple interments, all found at the Abusir el-Maleq archaeological site some 70 miles south of Cairo. In particular, the researchers zeroed in on mitochondrial DNA of these mummies. The DNA we usually talk about lives in the nucleus of each of our cells, and it comes from each of our parents. Mitochondrial DNA lives in the mitochondria, often called the powerhouse of the cell, and we only get it from our mothers. While it can’t tell your entire genetic story, mitochondrial DNA is great for showing genetic changes over time—how different related lineages moved and met around the globe throughout the ages. In this case, they were able to get a clear read on mitochondrial DNA from 90 mummies, while only 3 mummies yielded reliable nuclear DNA sequences.

According to their findings, Egyptian demographics didn’t change very much during the time range in which the various mummies lived—between 1400 BC and 400 AD.

“There was no detectable change for those 1,800 years of Egyptian history,” lead study author Johannes Krause of the Max Planck Institute for the Science of Human History in Germany told Reuters. “The big change happened between then and now.”

Back then, it seems that the mummified Egyptians were most closely related to folks from the Levant, a region of the Eastern Mediterranean including modern-day Turkey, Israel, and Palestine. Today, Egyptians have more sub-Saharan African DNA—some eight percent more of their ancestry comes from this region.

The homogeny throughout the mummies studied is a bit surprising, as Egypt served as quite a cultural crossroads during this time. The results suggest that foreign invaders and bustling trade routes did little to rock the genetic continuity of Ancient Egyptians—at least in Abusir el-Meleq. Other researchers—and the study authors themselves—point out that the results can’t be applied wholesale to the entire Ancient Egyptian culture. It’s possible that more genetic mixing, including the addition of more sub-Saharan African genes, might have occurred on other shores of the Nile. If sub-Saharan genes did flood in starting just 1,500 years ago, it’s likely that the growing slave trade in the area had something to do with it. Hopefully, future studies will help confirm the findings on these fragile remnants of DNA—and uncover more secrets wrapped up on other mummies across the region.

“This is the first glimpse of the genetic history of Egypt,” Krause told Nature. “But it’s really just the start.”