If Planet Nine Exists, We Might Have Stolen It 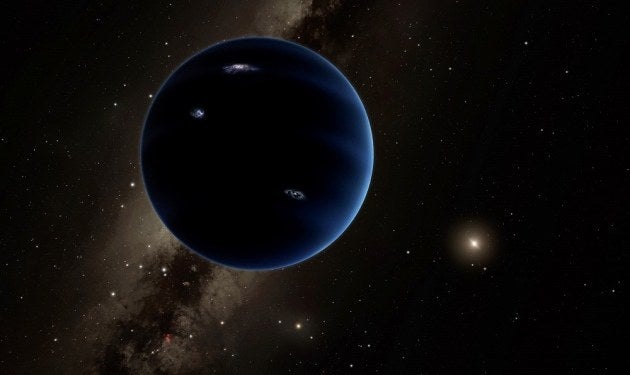 Say you’re our sun with your eight planets, and another star floats by — let’s call that star “Jesse.” Jesse’s got himself a planet. And you want to make her nine.

There’s a lot of buzz about a possible ninth planet hiding way out beyond Neptune. Well, if planet nine exists, our sun might have stolen it from a passing star, according to a team of European scientists led by Alexander Mustill.

So is there a ninth planet, and did we steal it? The answer to both questions is still “maybe.”

Beyond Neptune, there’s a band of rocks orbiting the sun called the Kuiper Belt. Pluto is one of those rocks, which is why scientists demoted it from “planet” to “dwarf planet” back in 2006; there were plenty of other big rocks similar to Pluto like Sedna and Eris which fulfilled most, but not all of the requirements they needed to be planet. Namely, they didn’t “clear their neighborhood.” A planet’s gravity should either suck up all the smaller stuff around it, or fling it all into space.

This past January, “Pluto Killer” Mike Brown, who is also a professor of astronomy at the California Institute of Technology, found that there were a few things out in the Kuiper Belt being pushed around in unexpected ways — it appeared that some force was “clearing the neighborhood.” They reported that the chance this behavior happened randomly was only .007%, so something should be causing all the pushing, maybe a new planet.

Now if the planet does exist, it’s really far away, like 75 times further than Pluto, and it would have to be huge, about ten times larger than Earth, which has had plenty of scientists asking where it could have come from. Mustill’s group ran some numbers and found that the chances of such a big planet all the way out there being stolen from another solar system was about 50 percent. Those are pretty good odds. However, our solar system would still need to fly by another solar system dangling a planet like our hypothetical planet nine and the chance of that happening are closer to .1 to 2 percent, reported The New Scientist. Those aren’t great odds, but it’s still a crazy possibility.

We don’t know for sure if there’s even a new planet, though. While the probability that all those Kuiper Belt objects are moving randomly is just .007%, the odds that you will be struck by lightning in your lifetime are about .008%, according to the National Weather Service. Maybe we found an new planet, or maybe we’re just living in a solar system that was struck by lightning. One scientist, Greg Laughlin, told the New Yorker that given Brown’s ability and rigorous analysis, there’s about a 68% chance that the planet exists, or 2 to 1 odds. Brown has since found more evidence, but has not published it yet.

Of course, weird things happen all the time both randomly and not randomly in our universe. Maybe the sun really did take Jesse’s planet.