Rosetta Offers New Insight Into Where Water On Earth Came From 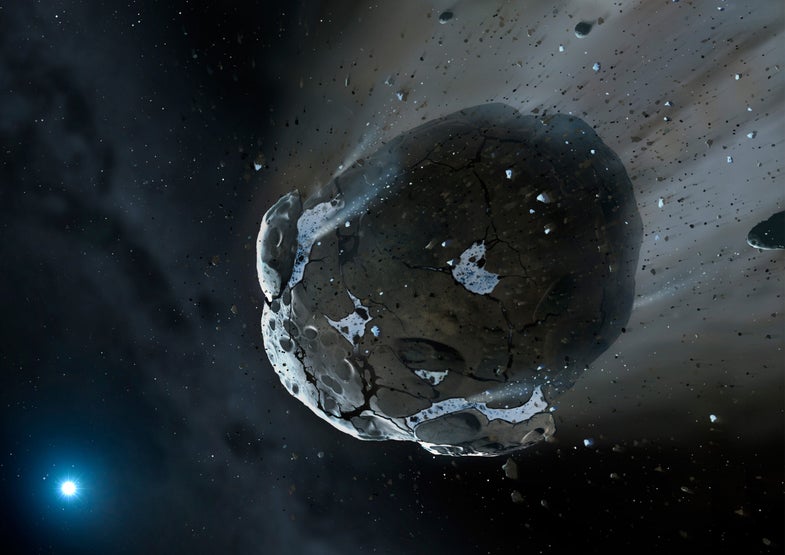 This is an artist's impression of a rocky and water-rich asteroid being torn apart by the strong gravity of the white dwarf star GD 61. Similar objects in our solar system likely delivered the bulk of water on Earth and represent the building blocks of the terrestrial planets. Link: NASA Press release.
SHARE

Four and a half billion years ago, the Sun and Earth were just being born out of a giant explosion, and the solar system was HOT. All that heat likely boiled away the water on Earth’s surface. So how did our parched planet come to be covered in water? The leading explanation is that it got carried here by comets and/or asteroids. They may seem dry and rocky now, but comets and asteroids would have carried a lot of water when they were young.

To figure out where our water came from, scientists look at its molecular composition. Water can be composed of regular hydrogen atoms, which have just one electron and one proton. But sometimes a hydrogen atom picks up an extra neutron, and then it’s called deuterium. Deuterium behaves the same as hydrogen, it’s just “heavier”. It’s also extremely rare on Earth.

Now, 325 million miles away, the Rosetta mission has measured the ratio of deuterium to hydrogen on Comet 67P/Churyumov-Gerasimenko—and it turns out the comet’s water composition is very different from Earth’s.

To date, the top three candidates for the source of Earth’s water were: a) comets from the Oort Cloud, which encircles the solar system; b) comets from the Kuiper Belt, which orbit the Sun between Neptune and Pluto; and c) asteroids from the belt between Mars and Jupiter.

Thirty years ago, scientists found out that Halley’s Comet (which originates in the Oort Cloud) has twice the deuterium of Earth’s water. “This was quite surprising, and ruled out that Oort cloud comets could be the source of our terrestrial water,” said Rosetta scientist Katherin Altwegg during a press conference.

But now the Rosetta mission has returned the second measurements of a Kuiper Belt comet, and has come to exactly the opposite conclusion. The orbiter measured the deuterium levels with it’s mass spectrometer, effectively weighing the molecules to see if they contained “heavy” or “light” versions of hydrogen. It found that Comet 67P’s heavy water is almost triple the amount seen on Earth—higher than any other body measured so far.

Altwegg says the results probably rule out Kuiper Belt comets as the source of Earth’s water. That’s because even if a lot of the KB comets are like Hartley 2, 67P’s deuterium levels are so high that it would only take a few comets like it to throw off the ratio.

Altwegg’s group concluded that, by a process of elimination, it’s now most likely that asteroids are the source of Earth’s water, also Altwegg concedes that Comet 67P may be one-of-a-kind for the Kuiper Belt. “We need more missions to Kuiper belt comets, which would be fabulous,” she said.

The results were published today in Science.