It's a matter of how, not if 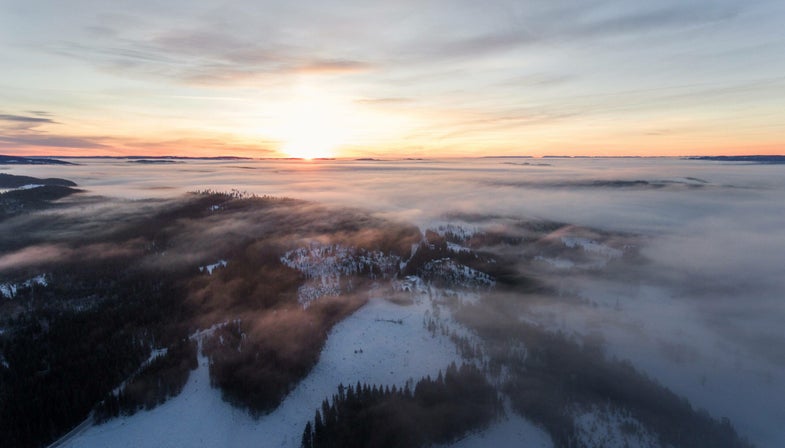 He should know. Arndt and his colleagues sit atop a vast trove of current and historical climate data—data so valuable, it’s protected by multiple failsafes and even backed up on tape at an undisclosed, secure location, where it’s carried by hand in a nondescript suitcase several times a week.

The data in question isn’t bank account information, or Social Security Numbers, or nuclear codes. It’s even more important than that: their data encompasses everything we know about our changing climate.

Arndt is chief of the monitoring section of the National Oceanic and Atmospheric Administration’s National Centers for Environmental Information, and he stewards data collected at weather stations, from satellites, by buoys, and covering every weather and climate condition you can imagine. How hot is the ocean? How big was that tsunami? What’s the weather like in space? The NCEI can (and does) answer every single one of those questions.

All told, they host a mind-boggling 28.6 petabytes—data equivalent to 18 Eiffel Towers’ worth of stacked-up smart phones. Arndt and his colleagues spend their days poring over data, comparing the incoming numbers to the baseline they call “normal.” Using daily, weekly, monthly, and annual rhythms, they coordinate data collection and sharing, keeping an eye on the quality of the numbers and how they stack up compared to yesterday, last week, and longer.

For Arndt, climate is all about scale—and the information that passes through his office tells a story that’s become all too familiar. “The upper atmosphere is cooling while the lower atmosphere is warming,” he says. “You don’t get that without changing the composition of the atmosphere. We’re seeing changes you would theoretically see in a warming world. More big rain—that’s an expectation. More big heat—that’s an expectation. The frozen stuff is generally melting or going away, based on the time of year and the location on the planet.”

He pauses for a moment, then continues. “I think the basics are more than settled.”

But what are the basics? How can we know if the climate is really changing? And does it really present the kinds of threats that have now become a familiar, but jarring, refrain?

Simply put, climate change is a change in the climate. If this is “no duh” territory, hang in for a second—it’s a bit more complicated than that. To really get climate change, it helps to understand a couple of other factors that often get lost in the shuffle.

The events that happen on a day-to-day basis in the atmosphere—from rain to snow to wind and heat—are known as weather. The average of weather over time is climate. So while weather isn’t climate, climate is weather, just looked at over a longer period of time.

Then there’s climate variability: the ways in which climate changes over periods of time like seasons. If a weather phenomenon like temperature or humidity goes above or below the long-term average for a certain time period of seasons or years, it’s known as climate variability.

For example, some years experience a higher-than-average sea surface temperature. When the average numbers go over a certain threshold, it’s an El Niño event. When they go below a certain threshold, it’s a La Niña. But both phenomena are an example of climate variability, because they’re cyclical. They come and go naturally. However, as Earth’s atmosphere and oceans continue to warm, El Niños could get more severe—or even stop being cyclical altogether—because of climate change.

When the average climate changes in a consistent upward or downward direction over the longer term, that’s what we call climate change. That change shifts the average weather of a place (or the entire planet) into a new normal.

Some people use the term “global warming” when they mean “climate change,” but they’re not exactly the same thing. Global warming is just a single part of a bigger change in climate—the warming of the average temperature near the surface of the earth.

“It’s really, really clear-cut. It’s like you’re adding drops of a poison to a glass of water. You can see it happening. You know it’s going to be toxic if—I don’t know why I’m coming up with so many morbid examples.”

Aradhna Tripati interrupts herself and starts to laugh. She’s sitting with her advisee, Ph.D. student Bryce Mitsunaga, in her office at the University of California, Los Angeles and trying to figure out a way to express just how clearly she and her colleagues agree that climate change is well under way.

Tripati, an associate professor at UCLA’s Department of Earth, Planetary, and Space Sciences, and Institute of the Environment and Sustainability, has spent her career putting climate data into context. Her lab uses chemistry to reconstruct the climate norms of the distant past—norms that make today’s atmosphere look a lot more alarming.

It might seem that it’s impossible to reconstruct what the atmosphere was like tens of millions of years ago. But information about that long-gone time is actually locked inside the chemical structure of really old things like mollusk shells. Tripati helped develop a “paleothermometer“—a technique that helps scientists measure past temperatures by analyzing the chemical ratios the ancient atmosphere left behind in those specimens. She can also suss out similar information from bubbles trapped in ancient ice cores.

Tripati has learned a lot about the long-past atmosphere using this technique. In 2009, she discovered that the last time carbon dioxide levels were as high as they are now was a full 15 million years ago—a time when the sea was 120 feet higher and the global average temperature up to 10°F warmer than it is now. This year, she collaborated on work that suggests that during that time—when CO2 levels were about the same level as they are now—the Antarctic ice sheet was particularly vulnerable to temperature fluctuations. And another project she co-authored showed that a dramatic ice sheet collapse 14,000 years ago caused the entire Earth’s jet stream to shift within a mere century.

“If you want to figure out which model is right and why it’s right, you have to use observations of the past,” she says. “It’s like Shakespeare’s ‘The Tempest’: Past is prologue.” Those past observations offer a context in which to view today’s climate—one in which Earth’s atmosphere is filled with the largest concentration of carbon dioxide in human history.

Greenhouse gases—the gases that trap heat within the atmosphere—are changing Earth’s climate today, just as they did then. But there’s a difference between today’s warming and that of the past. Much of today’s warming is due to human activities, and many human interventions not only spew greenhouse gases into the atmosphere, but also threaten the natural sinks, like forests and plankton, that are meant to absorb those gases.

It’s like a car in a grocery store parking lot, says Tripati. Park it on a sunny day with the windows and doors closed, and you’ve got a recipe for heat. The more greenhouse gases you have in the atmosphere—the thicker your windshield is—the more radiation from the sun is trapped inside.

Without a sink (an open window or door), the heat can’t escape. With the help of reflective surfaces like ice (the equivalent of a sun screen on your dashboard), the car could cool down a bit. But as the ice melts, it becomes a matter of life or death.

“You’d never stick your beloved pet or your friends or family in that situation, right?” asks Tripati.

“How far can we take this metaphor?” asks Mitsunaga.

Tripati laughs again, then tries another. “It’s like adding hot sauce,” she says. “The more hot sauce you add to your burrito, the spicier it gets. That’s what happens when you add more CO2 to the atmosphere.”

Earth’s atmosphere isn’t the only thing heating up and deviating from long-established norms. Today’s ocean is approximately 30 percent more acidic than it was before industrialization—thanks to the rising amount of carbon dioxide it must absorb. Sea levels are on the rise; Arctic sea ice is thicker and less extensive, ice sheets on both sides of the planet are melting, and glaciers are retreating or disappearing all around the world.

And those changes are happening fast. It used to be that scientists measured climate change in terms of hundreds or millions of years, but not anymore. In 2013, climate scientists at Stanford University conducted a review of dozens of scientific studies and climate models and determined that in the coming century, climate change is likely to happen 10 times more quickly than the global changes of the past 65 million years.

A slew of recent research, including a suite of four papers that appeared in the journal Proceedings of the National Academy of Sciences last year, suggests just how dramatically human activity has already affected a key climate change indicator: Earth’s sea levels. Two of the papers came to almost the exact same conclusions about the amount the sea level has risen in the last century. Another suggested that the melting Antarctic ice sheet could disappear much more rapidly than scientists once thought. That could spur a chain reaction as sea levels rise, coastal areas and wetlands flood, soil is flooded, and animal habitats are lost.

These kinds of chain reactions are among the things scientists most fear. Life on Earth is closely related, and an anomaly on one side of the globe can cause another anomaly elsewhere. And soon, many of those anomalies will become the norm.

So is Earth past the point of no return? Maybe. Last year, carbon dioxide concentrations passed a critical threshold of 400 parts per million. Scientists now predict that we’ll never go below that threshold again during our lifetimes. And even if we stopped emitting carbon today, it could take thousands of years for the CO2 to be neutralized.

That’s not to say that cutting emissions won’t help; the lighter the load, the closer recovery will be, and reduced CO2 levels will make it easier to mitigate other, shorter-lived greenhouse gases like methane.

Arndt, perched atop of his mass of data and with more coming in every day, doesn’t ask himself whether climate change is happening. Instead, he wonders what comes next for science—and Earth. “These large-scale changes are very consistent with a warming planet,” he says. “Now, how do we understand and quantify how much more or less likely they are in a warming world? It’s a tough science.”

Tripati agrees. “In some places, we really don’t have a good handle on how much precipitation is going to change and how much evaporation is going to change. We know it’s going to get hotter. We know that evaporation rates are going to go up. But we don’t know how much things are going to change. There are sleeping dragons. And now I realize how many there are.” For Arndt, Tripati, and the thousands of scientists dedicated to tracking climate and figuring out its modern-day trajectory, it’s not a matter of if—or even when. The only question left is “how?”

You can find point-by-point explanations of the types of evidence described above here.