The roar of the millions-strong Magicicada is due back on the east coast this summer--the first time in 17 years. Here's how to track it. 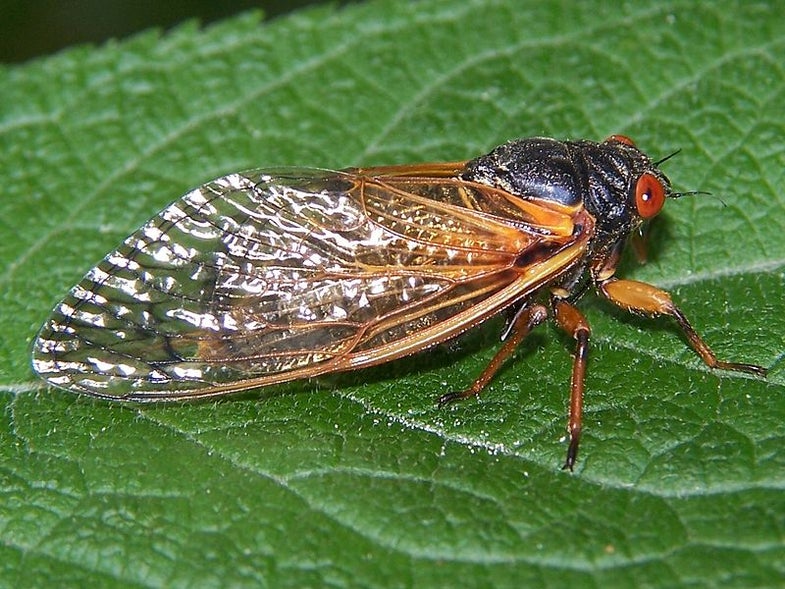 Every few summers in the heavily wooded section of southern Pennsylvania where I grew up, we’d have about a week in which everything we did–hiking through the parks, climbing trees, walking dogs, buying hoagies–would be accompanied by the roar of cicadas. It’s not like a chorus of birds, or even the noise of New York City traffic. It’s louder, more constant, a hissing, crackling noise like the screaming of the wind itself. Eventually it fades into white noise, but if you leave town for a weekend and come back, you can’t believe anyone is talking about anything else. It’s like a biblical plague transmitted only in audio.

An even rarer beast is hatching this year. The Magicicada is a genus of cicada with either a 13- or a 17-year lifespan, depending on species. That might be surprising to those not familiar with the cicada, who’d think it only lives for a few weeks at a time. But the Magicicada larvae live underground for nearly their entire lives, feeding on fluids from tree roots in the northeast United States, emerging with only a few weeks life in their lives in enormous numbers to molt into adults, mate, lay eggs, and die.

It was initially thought that the cicadas behaved this way, with such precision and patience, to overwhelm predators with sheer numbers. The cicada has basically no defenses, and is, according to my cats, delicious and very fun to catch. It’s prey for birds, foxes, housecats, possums, and anything else on the east coast that wants a little snack. But apparently that’s not the case; we’re not really sure why they use this life cycle strategy, but one guess is that such a long period between broods could fool predators, who likely won’t have been alive (or won’t remember) the previous emergence.

Brood II, also known as the “East Coast Brood,” is a 17-year cicada due for emergence this summer. It ranges from the Virginia/North Carolina border up through the northern end of the New York City suburbs. Radiolab, one of our favorite science radio shows/podcasts, has come up with a cicada tracker to pinpoint exactly when Brood II will begin “swarmageddon.” Starting tonight, Radiolab will be hosting events all over New York City to build DIY trackers that monitor the soil temperature. When the soil eight inches below the surface reaches a steady temperature of 64 degrees F, the cicadas will begin their transformation into a massive, millions-strong hatch-fest.

The detector, which can be made with parts easily obtainable at any Radioshack (or online), costs about $80. You can then report your findings to Radiolab, starting at the latest in mid-April, so we can see on Radiolab’s interactive map just when they’ll emerge. The temperature hasn’t even cracked 40 degrees yet, so we’ve got some time before the roar.

Check out the project here.