You Can Hear When Trees Are Thirsty 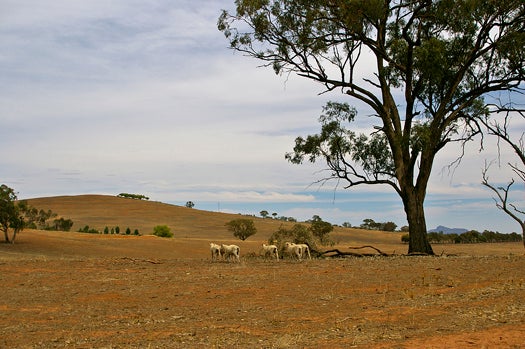 Imagine you’re just polishing off a glass of soda. Whatever liquid left in the straw makes that gurgling sound indicative that there’s just nothing left in the glass to drink. Turns out, trees under drought stress make the same sad sound, and a few researchers hope they can use that acoustic signature to identify and save otherwise-doomed trees.

That trees make noise (beyond the delicate rustle of leaves in the wind) is no secret. But teasing out the specific physical phenomena that cause the various arboreal noises has eluded researchers. At the recent meeting of the American Physical Society, scientists from Grenoble University in France presented research that not only were they able to determine that drought-stressed trees make noise, they were also able to show exactly which process created the sound.

To really grok the research, it’s helpful to understand how trees transport water. Trees draw ground water up through specialized tubes called xylem, relying on intermolecular forces between water molecules and themselves, and water molecules and the sides of the tubes, to create a single column of unbroken water in each xylem tube. But as groundwater dries up, the trees must pull harder on the remaining water; if the pressure is greater than the strength of the intermolecular forces, the column of water breaks and an air bubble forms. This process is called cavitation. Too many air bubbles can mean death for the tree.

To ensure that these air bubbles were the culprits behind the acoustic signature of drought-parched trees, the researchers mocked up a tree in the lab. They placed a thin piece of pine wood, complete with its xylem intact, into a capsule filled with a gel. As the researchers evaporated the water out of the gel — a test “drought” — they simultaneously recorded video and sound of the cavitation in the xylem. The researchers discovered that about half of the sounds made by a tree are due to cavitation, and that the process has its own unique acoustical signature. In the future, the researchers say, forest managers could use a hand-held acoustic device to identify water-stressed trees before permanent damage sets in.