Megapixels: A Shark Eats a Shark 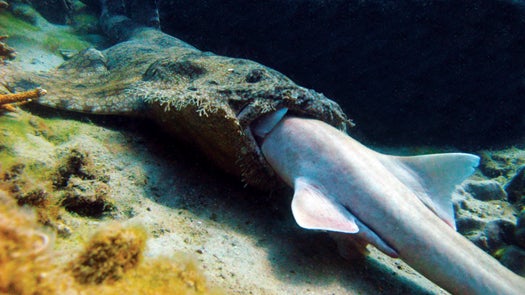 Last August, while diving to conduct a fish census on Australia’s Great Barrier Reef, marine ecologist Daniela Ceccarelli spotted the ghostly white skin of a brown-banded bamboo shark. When she swam in for a closer look, she saw that the fish’s head had disappeared—into the mouth of another shark.

The predator was a four-foot wobbegong, a bottom-dwelling shark that uses its natural camouflage to blend into the seafloor and ambush prey. Like many sharks, a wobbegong can unhinge its lower jaw to attack large prey; its sharp, rear-pointing teeth then keep the victim from escaping. Both sharks remained motionless for the 30 minutes Ceccarelli and her research partner spent watching them. Ceccarelli says the bamboo shark was almost certainly dead by the time she arrived, and that it probably took several more hours for the wobbegong to finish its meal.