The eruption of Eyjafjallajökull gave scientists a chance to test a high-stakes geoengineering idea. 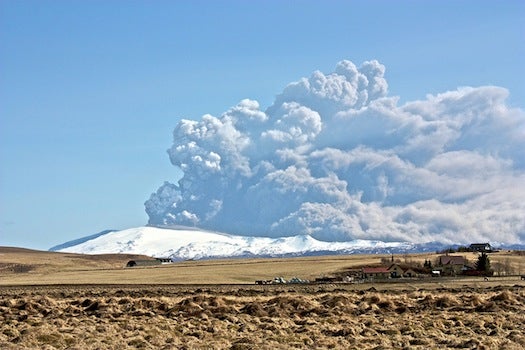 At least one high-stakes idea for reversing the effects of global warming might not work, according to a new study.

Over the past few years, some scientists have brought up the idea of “geo-engineering” the Earth with enormous projects to mitigate some of the ill effects of climate change. Examples include building space mirrors or creating big clouds to reflect away excess heat. No one is sure how well such projects would work, however, in part because it’s not easy to test them without exposing everyone involved to a lot of risk. Now, a new study of a natural mirror to one popular geo-engineering idea has shown that iron fertilization of the ocean might have only short-lived effects.

Here’s how iron fertilization is supposed to work. Extra iron added to the sea is supposed to feed the growth of plant-like phytoplankton, which in turn would absorb more carbon dioxide from the air. When the phytoplankton died, they would fall to the bottom of the ocean.

Especially compared to space mirrors, iron fertilization is one of the easiest-to-implement of the geoengineering ideas. Last year, California businessman Russ George dumped more than 100 tons of iron sufate into the Pacific Ocean, in violation of two United Nations conventions, apparently without telling anyone his plans.

To study the effectiveness of iron fertilization without causing any international problems, researchers from the U.K., Norway and South Africa studied the aftermath of the 2010 eruption of the volcano Eyjafjallajökull in Iceland. Like George’s dumping, the researchers found that clouds of iron from Eyjafjallajökull triggered a lush phytoplankton bloom.

The bloom soon died, however, because the plankton ran out of the nitrogen they needed. Climate News Network called the results a blow for geoengineering supporters.

The Eyjafjallajökull researchers published their work earlier this month in the journal Geophysical Research Letters.