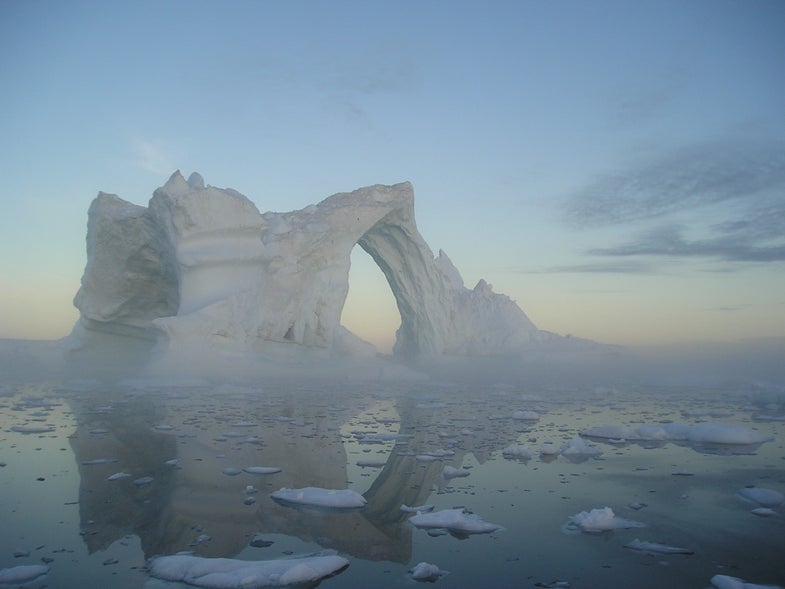 When the Arctic flunks, we all lose. The National Oceanic and Atmospheric Administration (NOAA) released its annual “Arctic Report Card” on Tuesday, and the outlook is grim.

“Personally, I would have to say that this last year has been the most extreme year for the Arctic that I have ever seen,” Mark Serreze, director of the National Snow and Ice Data Center in Boulder, Colorado (who didn’t contribute to the 106-page report) told the Associated Press. “It’s crazy,” he added.

The peer-reviewed report “card,” which has been issued annually for the past decade, includes the most authoritative observations on the Arctic environment. 2016 looks destined to be the hottest year on record, but scientists are particularly concerned with conditions in the Arctic—if temperatures start to stray above the melting point too often, the entire landscape could change radically.

“In other places, going from 75 degrees Fahrenheit to 80 degrees Fahrenheit might not make such a great difference,” NOAA’s Jeremy Mathis told NPR. “But if you cross the melting point, you are basically stepping into a completely new world.” Plus, he told the AP, the escape of cold air from melting Arctic ice actually changes weather conditions the whole world over. Even the United States could have more extreme weather events because of Arctic warming, he said.

The average surface air temperature for 2016 is “by far the highest since 1990,” according to the report, with new monthly record highs cropping up in January, February, October, and November. The fact that record highs are now occurring in the winter and not just the summer may be a sign that the new climate is here to stay, according to NOAA’s assessment. The extent of spring snow cover in the North American Arctic was the lowest ever recorded since satellite observations began in 1967, and scientists have only seen the Greenland ice sheet start melting earlier in the spring once in 37 years of observations.

The outlook is particularly poor on the ice front. 2016 tied with 2007 for the second lowest minimum sea ice extent at the end of summer. That might not sound so terrible, but scientists saw only modest dips in sea ice from 2013-2015—so the drop is troubling. “In terms of sea ice, I’d say sea ice cover is a D+,” Dartmouth University geophysicist Donald Perovich told reporters at the annual meeting of the American Geophysical Union. “Because I’m an easy grader.”

Unsurprisingly, wildlife is working to adapt to this strange new world. Parasites found in small Arctic mammals indicate that sub-Arctic species are shifting north, increasing biodiversity. This may not be good news for Arctic locals grappling with dwindling resources. Meanwhile, current conditions may leave the Arctic prone to ocean acidification, which could be devastating given the short length of the Arctic food chain—animals may not be able to find replacements for their cuisine of choice after acidification kills dinner.

The report comes during a period of uncertainty for climate change researchers. President-elect Donald Trump has filled his administration with vocal opponents of the existence of human-induced climate change (a phenomenon which is well-supported by the weight of the scientific evidence on the subject). Scott Pruitt, Trump’s nominee for the head of the Environmental Protection Agency, has sued the administration he may one day lead and bills himself as “a leading advocate against the EPA’s activist agenda.”

The House of Representatives Committee on Science, Space, and Technology, tasked with overseeing the EPA, has tweeted out misleading articles from dubious sources in opposition of climate change mitigation, and Trump’s nominee for secretary of state, Rex Tillerson, is the chief executive of ExxonMobil—the world’s largest oil company, which has drilling interests in the Arctic.

Trump has also declared his intent to defund NASA’s Earth Science research, which the President-elect feels is too politically partisan—because its data contributes to the growing body of evidence in support of climate change.

The Washington Posts reports that climate scientists are “guerrilla archiving” their data, compiling evidence in support of climate change in case it’s obfuscated by a hostile administration.

“Something that seemed a little paranoid to me before all of a sudden seems potentially realistic, or at least something you’d want to hedge against,” Nick Santos, an environmental researcher at the University of California at Davis, told The Post. “Doing this can only be a good thing. Hopefully they leave everything in place. But if not, we’re planning for that.”

Even if data isn’t disappeared by the government, many scientists fear that funding cuts and administrative pressure could keep them from continuing to observe the planet’s changing climate. And with the Arctic’s abysmal report card sitting in front of us, it’s clear that scientists need to continue to keep a close eye on the planet’s rapid warming.