Bats Out of Hell: Rescue Efforts for Some of the Smallest Victims of Australia’s Floods

A week before last December’s massive floods in Queensland, Australia, volunteers from the Australian Bat Clinic and Wildlife Trauma Centre... 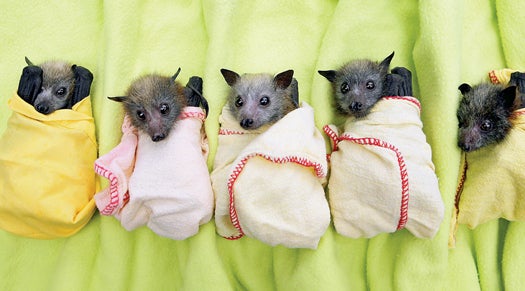 December 18, 2010: Brisbane, QLD. Wendy Wimberley from the Bat Clinic in Advancetown has over 130 baby bats after the wet weather PSC0411_Megapixels.
SHARE

A week before last December’s massive floods in Queensland, Australia, volunteers from the Australian Bat Clinic and Wildlife Trauma Centre rescued 150 orphaned grey-headed flying foxes, these five among them.

Clinic co-founder Trish Wimberley says the mothers may have left their young because they sensed the coming flood or were suffering from starvation. Preserving these endangered bat populations is important, says Winifred Frick, a National Science Foundation bioinformatics postdoctoral fellow, because bats perform “ecosystem services” such as pollinating plants and eating insects that would otherwise consume crops.

Generally, the clinic releases the animals back into the wild after 16 weeks of feeding and medical care, but because they were severely undernourished when found, these bats will require extra care before being brought back home.