Mystery Animal Contest: Who Is This Huggable Tip-Toer? 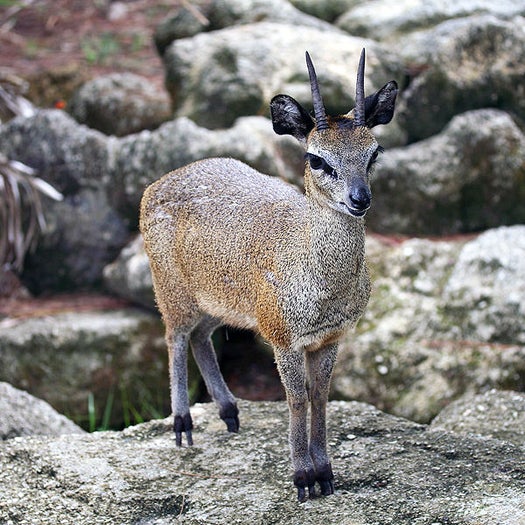 Update: And the winner is…Austin Spence, who correctly guessed that this is a klipspringer! The klipspringer is a very tiny species of antelope–it only reaches 22 inches tall at its shoulder–native to the rocky southern half of Africa. It’s common in South Africa, but can be found as far north as Ethiopia. If you’ll notice, the klipspringer actually stands on the very tip of its hooves. It does that all the time–it’s to give it a more delicate and precise footprint as it climbs around its mountain home.

It’s one of the most agile mountain climbers in the world; it’s camouflaged to look like the rocks around it, but it doesn’t really need to be, since there’s no predator in Africa that can catch it on the rocks. It mostly eats succulents growing in the crevices of rocks, which have a high enough water content that it doesn’t ever need to find sources of water. It is also, objectively speaking, the most adorable species of antelope. Hell, it mates for life and spends all its time with its mate, watching over it while it eats. Aw! Hi klipspringer!