With 581 Copies So Far, Reclonable Mouse Will Live Forever

Biologists have developed a new cloning technique that lets them create new clones indefinitely, and keeps the animals' normal lifespans, too. 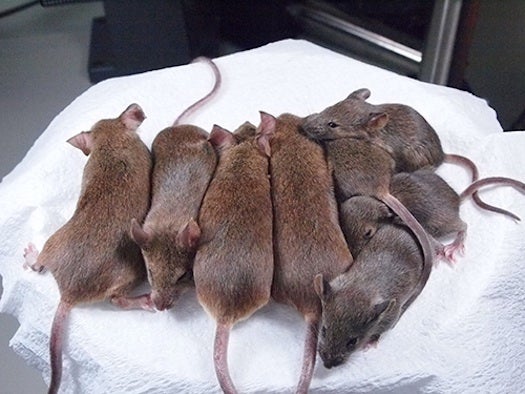 Biologists in Japan have cloned 581 mice from one original donor mouse, Livescience reported. The scientists made the mice over 25 generations of cloning; that is, from making clones from clones from clones, 25 times over.

They could probably make animal clones indefinitely, the research team wrote in a paper published last week in the journal Cell Stem Cell. Really. Check out the last sentence of their abstract: “Our results show that repeated iterative recloning is possible and suggest that, with adequately efficient techniques, it may be possible to reclone animals indefinitely.”

The 581 cloned mice were made using an improved version of somatic cell nuclear transfer, the technique that created Dolly the cloned sheep in 1996. Previously, researchers using somatic nuclear cell transfer would get fewer and fewer animals every time they tried to make a clone from a clone. Eventually, they wouldn’t get any new clones at all. Cloned mammals also often died sooner than their non-cloned counterparts.

The cloning team protected the mice’s DNA from the genetic abnormalities they (the humans) think reduced the efficiency of previous cloning efforts. The researchers didn’t lose any cloning efficiency over their 25 generations, they reported, and their cloned mice lived normal lifespans of about two years.

Cloning could help reproduce animals for farming or conservation, Sayaka Wakayama, a biologist at the RIKEN Center for Developmental Biology who led the cloning study, said in a statement. This isn’t the first time Wakayama has made some big strides in cloning. He previously cloned mice from bodies of mice that had been frozen for 16 years.