There Used To Be Freaking Camels In The Arctic

In the northernmost reaches of Canada, within the Arctic Circle, scientists have found fossils of...camels. Wait, what? 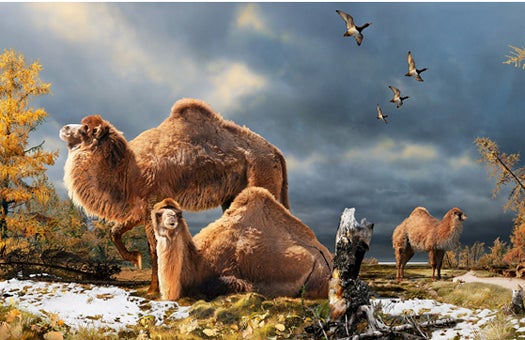 North America was a crazy place a few million years ago. The megafauna alone would make the world’s most awesome zoo collection: giant sloths! Mastodons! Nine-foot saber-toothed salmon! Dire wolves! And, believe it or not, camels. Yes, camels originally arose in North America 45 million years ago and lived there until human migrated into the area around 16,000 years ago.

So, we might expect to find camels somewhere in North America, sure. But researchers just found fossils on Ellesmere Island, in the northern territory of Nunavut, Canada, far above the Arctic Circle. Nobody knew that camels could live so far north, and now researchers have begun to wonder: was the camel’s hump — which is basically a judicious redistribution of fat — an adaptation to deal with a cold climate? And identifying the fossils as camels is a feat unto itself — they are all small shards, discovered in digs in 2006, 2008 and 2010, rather than the giant bones one usually imagines.

After painstaking reconstruction following 3-D laser scanning, scientists discovered that the bone fragments came from a large tibia. Further, this tibia came from a large cloven-hoofed animal called an artiodactyl. Carbon dating revealed that the bones were about 3 million years old, and the only large artiodactyl in North America back then was…drum roll please…the camel.

Full confirmation of the identity of the fossil animal came from a new technique called collagen fingerprinting. Researchers first extract some of the collagen still left in the bones–collagen sticks around for a long time–by drilling a small hole in the bone and collecting the accrued dust. After demineralization of the bone dust and gelatinization, researchers digested the collagen protein using the protease trypsin. The trypsin digestion results in peptide fragments. Researchers put those peptides into a mass spectrometer to determine the different fragment lengths; each species has its own particular fragment signature. When the researchers compared the fossil signatures to known current species, they corroborated that the High Arctic Camel is closely related to both dromedaries (modern single-humped camels) and to another older species of camel whose fossils have been found in the Yukon Territory.

Finally, while temperatures in that region during that time period were warmer than they are now (up to 10 degrees Celsius warmer in the Arctic), it was still a harsh environment. From their recent paper on the high arctic camel: “Other specialized traits seen in modern camels may also have served well in an Arctic realm. For example their wide flat feet function well on soft substrates, such as sand or snow. Their iconic hump(s), containing fat, also may have been adaptive. As seen in high-latitude ungulates today, fat deposits could have been critically important for allowing populations to survive and reproduce in harsh climates characterized by 6-month long, cold, winters.” So, there you go. Arctic camels.

You can read the full article in the journal Nature Communications.