Trading seals in for caribou and geese 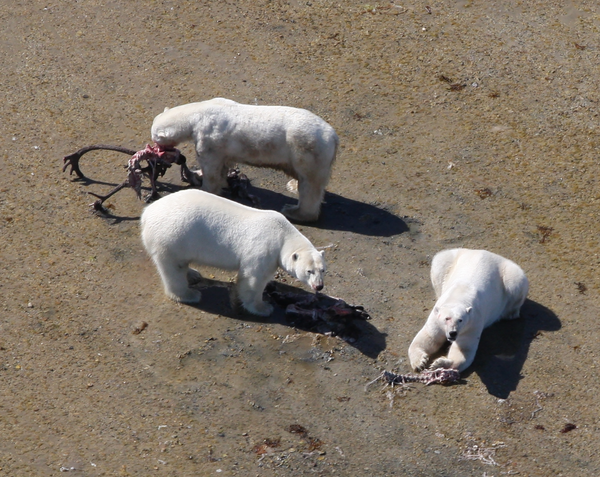 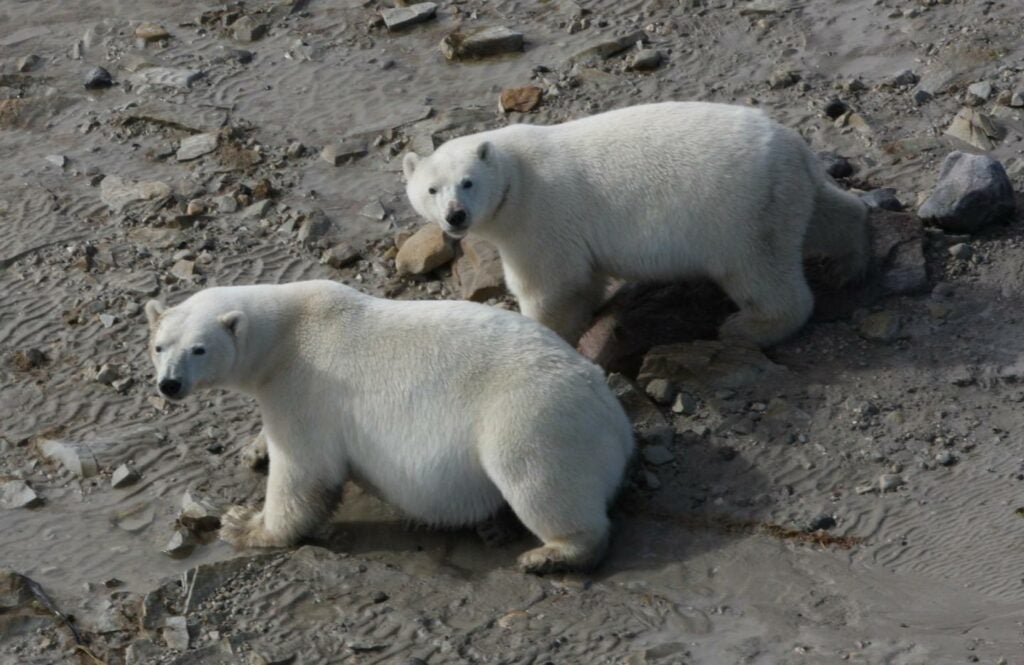 Polar bears near the coast of the western Hudson Bay

Polar bears are often used as the face of climate change and the melting of the Arctic. They have long been cast as one of the first large, familiar species to possibly go extinct because of a changing climate. As the spring and summer sea ice continues to retreat further and for longer periods of time, bears are losing access to their main source of food–ringed seals–and are starting to starve.

However, new research suggests the situation may not be quite so grim. Linda Gormezano and Robert Rockwell from the American Museum of Natural History (AMNH) posit that polar bears may be able to fulfill energy needs by feeding on caribou and snow geese instead. In fact, they’re already starting to do so. Rather than waiting around to starve, the bears are trying to adapt.

During the late spring and summer months when the ice pack naturally starts to recede, there have always been polar bear populations that experience a couple of ice-free months–times when the the ice is too far out to sea to go and hunt seals in their ice lairs. To make do, the bears live on land, burning up the fat reserves from early spring gorging, and scraping together whatever else is easily available until the ice comes back in. In recent years, however, as the sea ice recedes earlier and earlier because of climate change, the amount of time the bears are marooned on land grows longer. Energy demands become more serious, and seal alternatives must be found. In the Western Hudson Bay, Canada, where the AMNH ecologists based their study, the ice-free season is predicted to expand from 120 days to 180. During that time, 28 to 48 percent of adult bears are projected to starve unless their nutritional needs can be met.

“I’ve got 1,200 piles of polar bear scat here at the AMNH full of caribou fur and goose feathers.”

Rockwell has been “watching polar bears eating things for 47 years,” and in recent times he’s seen some pretty novel hunting behaviors. That spurred him and Gormezano to take a new look at an old model that predicted polar bear survival in the region. The model, developed in 2009, lays out an “energy budget” for the Hudson Bay bears and uses information on metabolic rates and energy requirements to gauge bear survival as the ice-free season grows. As expected, mass starvation was predicted to ensue. What the model didn’t take into account, however, was the possibility of marooned bears finding novel food sources on land. Based on Rockwell’s personal observations and experience, it seems that they are. 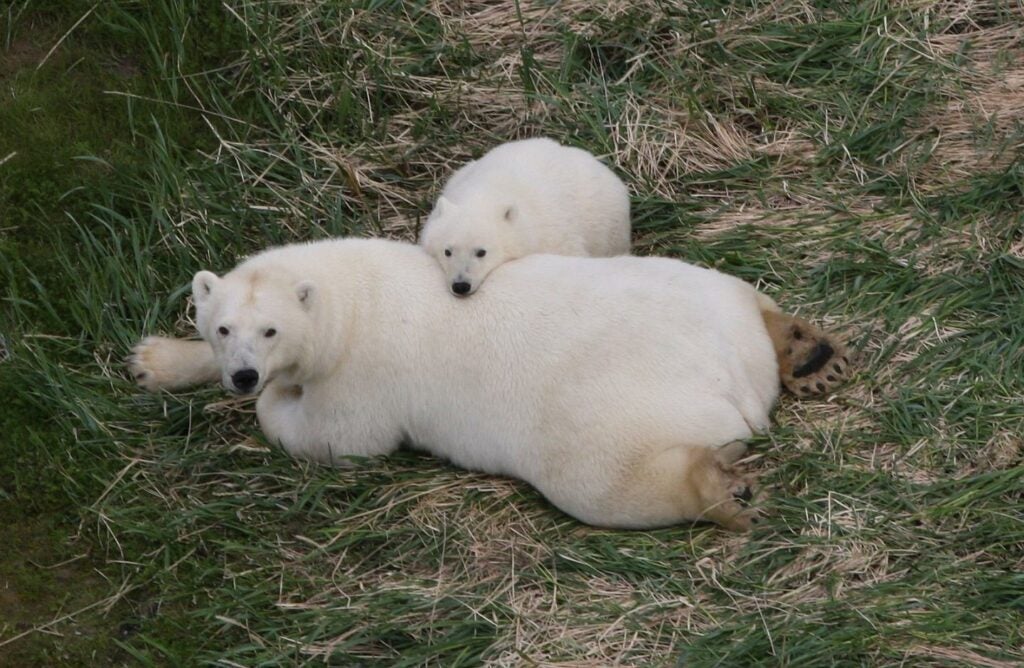 A mother polar bear and her cub near the coast of Western Hudson Bay.

Gormezano and Rockwell calculated the total caloric values of snow geese and caribou–two possible prey alternatives to seals that bears have been observed hunting–and found there to be enough calories necessary to prevent starvation. One bull caribou, for example, worth approximately 105,000 calories, could last a bear for 27 days. Even a calf, depending on age, could provide anywhere from 4,700 to 34,000 calories and sustain an adult bear for 8 days or so. Feeding on smaller food sources, like geese and eggs, requires more consumption–between 10 to 26 clutches of eggs a day–but the relative lack of effort needed to harvest them tends to offset this. The reality is that polar bears are master opportunists (they have been known to snack on anything from berries and lichens to whale carcasses). As Rockwell so eloquently puts it, “If it’s lunch time and there’s a sushi bar, I’m there. But if it’s lunch time and there isn’t a sushi bar, pizza works.”

Rockwell and Gormezano didn’t randomly pick caribou and snow geese as prey alternatives to seals on a whim, but because they have observed bears feeding on the two. “I’ve got 1,200 piles of polar bear scat here at the AMNH full of caribou fur and goose feathers.” says Rockwell. Rockwell, who originally spent much of his time in the Hudson Bay region to study goose populations, noticed during his studies that although polar bears were being forced ashore earlier each year, they actually overlapped with the incubation period of snow geese. This offers up plenty of food and calories in goose eggs that couldn’t be any easier to get. (“I’m old, and I can outrun an egg. So can a polar bear,” says Rockwell) Their arrival, perhaps not coincidentally, has overlapped with caribou calving as well. Male polar bears feed on the remains of a bull caribou.

The challenge with these findings is trying to figure out what it all means to polar bears as a whole. Each habitat, whether located in Canada, Alaska, Norway, or Russia, presents a unique set of pressures that different populations may or may not be adapting to in a similar fashion to the bears of the western Hudson Bay. Some hints have been observed, though. Rockwell’s friend and colleague Jouke Prop, has seen bears in the Norwegian archipelago of Svalbard coming onto land even before the ice has fully receded to feast on incubating goose eggs, only to head back out to the ice again to return to hunting seals before the ice melts. On Wrangel Island in the Bering Sea, polar bears have started hunting walruses without even doing the killing themselves. They charge herds lying on the beach, and in the resulting pandemonium and frantic dash to the sea, 2,000-pound bull walruses trample pups to do death. The bears then casually walk up and feed at their leisure.

Despite the changing hunting strategies of some polar bears, it remains to be seen how they will fare in the coming years as the weight of climate change piles on. Some populations of bears are having a harder time than others, particularly ones in colder locations like Alaska where they have been able to stay out on the pack ice and hunt seals all year round. It’s also possible that not enough bears will catch on to new hunting techniques, or that prey species like caribou or geese populations, though massive now, will also decrease due to climate change pressures.

It’s important to understand the stresses and dangers polar bears–as well as many other species, including our own–are facing because of climate change. But, as Rockwell is keen to point out, polar bears are not sitting around on ice floes waiting to die. Like life everywhere since time immemorial, they are fighting back and trying to adapt.