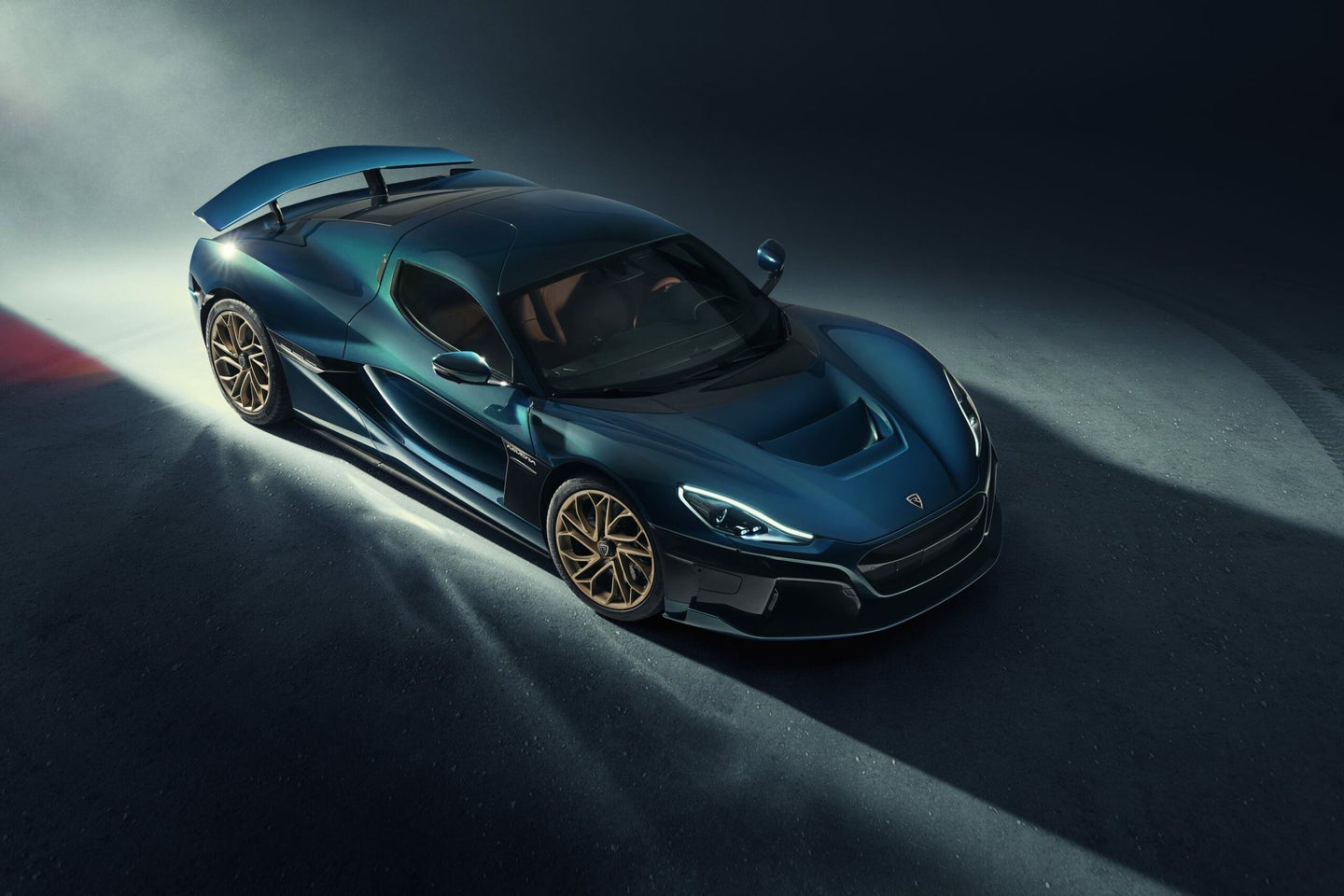 Through the years, electric cars have earned a reputation of being rather beige. The complaints of previous generation electric vehicles with lack of throttle or steering response were seen as a sacrifice in the name of fuel economy, but were mostly the product of technological limitations felt by early EV development. That’s not the case anymore, especially as battery technology and electric motors have evolved to create power plants capable of outrunning even the fastest cars on the road today.

Croatian automaker Rimac knows this and has been focusing on building powerful battery-powered cars since 2009. On June 1, Rimac finally revealed its latest gasoline slayer to the world—and it boasts some of the most impressive performance stats to ever hit the pavement.

Meet the Rimac Nevera, the 1,914-horsepower hypercar named after a Mediterranean storm and destined to demolish speed records around the world.

Using four hub-mounted electric motors—one at each wheel—the Nevera generates a whopping 1740 pound-feet of combined torque. Unlike a gasoline engine, the hypercar’s electric motor produces this torque instantly without waiting for a turbocharger to spool or for an engine to rev to its peak efficiency.

[Related: EVs are silent and soulless, so BMW tapped Hans Zimmer to give them a voice]

The high power output combined with the instantaneous torque of an electric motor means that the Nevera can accelerate at an alarmingly fast rate. From a stop, Rimac says, the car can reach 60 miles per hour in just 1.85 seconds. That effectively makes it the fastest accelerating production car to-date, outpacing the Koenigsegg Gemera and Bugatti Chiron Super Sport.

If the driver keeps the accelerator pressed, the Nevera will hit 100 MPH in only 4.3 seconds and 186 MPH in 9.6. A quarter-mile sprint will take a modest 8.6 seconds.

Power is just half the battle. The Nevera not only needs to pack a powerful punch, but also has to be as lightweight as possible to combat the weight of its battery pack. To achieve this, Rimac uses lightweight carbon fiber to construct the hypercar’s monocoque—the single-piece exoskeleton of the vehicle responsible for the chassis’ structural rigidity. The monocoque integrates a bonded carbon fiber roof, carbon fiber rear subframe, and the vehicle’s carbon-encased battery pack to form the single largest carbon fiber structure used in the automotive industry today. The entire vehicle weighs in at 4,740 pounds, 440 lbs of which can be attributed to the monocoque itself.

All things considered, that’s pretty average as far as electric cars go. As a frame of reference, the Tesla Model S Plaid weighs in at 4,766 lbs, while BMW’s upcoming i4 M50 electric performance sedan tips the scales at 5,049 lbs.

When compared to a gasoline-powered hypercar, the Nevera seems fairly heavy. The Bugatti Chiron, a rather bloated hypercar, can weigh around 4,358 lbs. A more modest Lamborghini Aventador is just 3,472 pounds—but neither of those have 6,960 individual battery cells along for the ride.

Speaking of batteries, Rimac says its 120 kilowatt-hour pack utilizes 21700 cells (the same form factor battery cell found in the Tesla Model 3 and Model Y). The pack is poised to deliver an impressive 340 miles on a single charge. When depleted, Rimac claims the car can utilize 500-kilowatt fast charging to reach an 80 percent state of charge in just 22 minutes.

Modern electric cars not only output power to their motors, but also use those same motors to return power to the battery pack when coming to a stop or coasting down a hill. This technology, called regenerative braking, uses the resistance of the electric motors to decelerate without applying the car’s actual brakes and, in-turn, trickles a charge back into the battery pack. Both charging and discharging a battery quickly generates a tremendous amount of heat, so to keep temperatures optional, the Nevera will detect if the temperature of its battery pack is climbing too high. In that instance, the car can decrease the regenerative braking rate in favor of using the force of its physical brakes.

Range and performance are both affected by a car’s aerodynamics. By reducing drag, a car may achieve better range. Proportionally increasing downforce in key areas of a vehicle’s bodywork can increase drag, resulting in decreased range but better maintained speed throughout a corner. While this is a challenge faced when designing any new car, it’s a significantly more important detail to refine in an electric car that can’t just fill up at the pump like its gasoline competitors. Rimac engineered a solution by applying the concept of active aerodynamics into the Nevera’s bodywork.

Active aerodynamics work by modifying aspects of the vehicle’s design in order to change how the car responds to forces like lift and drag that air exerts onto a car during driving. The driver can select a particular driving profile (like Track Mode to unleash the car’s full power, or Range Mode to conserve charge on a calmer drive) and the Nevera is programmed to physically move its bodywork to adjust its response to these forces. Rimac built in adjustments to the profile of the hood and a flap found on its underbody. Additionally, the rear diffuser and rear spoiler can shift position, meaning that the Nevera can actively adjust how much drag and downforce is being experienced at any given time. When the driver is aiming to maximize range, the car will have a lower drag coefficient, and when putting power to the pavement is the priority, the car will engage high downforce mode.

Using the Nevera’s onboard sensors, Rimac is able to introduce a feature it calls “AI Driver Coach.” This Nvidia-powered machine learning system makes use of 13 on-board cameras, 12 ultrasonic sensors, and 6 radars to assess a driver’s skill on the track. The system can then provide auditory and visual feedback to improve steering, braking, and acceleration patterns. Rimac says that the Driver Coach feature won’t ship with the Nevera, but will instead be available as an over-the-air update in 2022.

Rimac will build just 150 Neveras for sale around the globe, and each buyer will get an exclusive invitation to the Rimac facility in Croatia to design their vehicle to their exact specifications. That level of customization shouldn’t come as a surprise given the car’s price tag:  each unit is priced at an eye-watering 2 Million Euros ($2.44 million USD).