Does the hotly anticipated plug-in hybrid Chevy Volt have a shot at rejuvenating General Motors? We took a prototype version for a spin to find out. 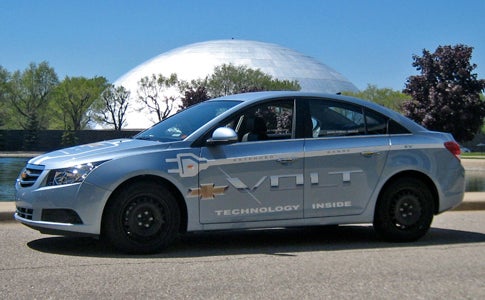 Reporting on a test drive of a new car is generally pretty simple. How does the car look? How does it feel? Does it hang with its competitive set? How many parking-garage attendants told you it was awesome?

Assessing a pre-prototype version of the Chevy Volt is, um, different. To start, it’s not a production car. Then there’s the context. The Volt lies at the intersection of some of the most contentious issues of the day—electric cars vs. next-generation gas or diesel engines, CAFE standards, greenhouse-gas restrictions, the federal bailout of the American auto industry. Some people still refuse to believe that the Volt is actually a production-intent project. But after driving the car earlier this week, I can testify that the Volt is definitely real.

The final iteration won’t roll off the production line for another year and a half, and yet die-hard fanboys and unhinged haters have been brawling online over the car for more than two years. The Volt—which, in case you haven’t heard, is an extended-range electric car that runs 40 miles on a single charge of its huge lithium-ion battery pack before a 1.4-liter I4 flex-fuel engine kicks in to power the electric motor and keep you going until you run out of gas—is a Hail Mary pass from what was once the greatest automaker on the planet, an industrial giant that has now fallen into the cold embrace of the federal government. And so evaluating a car like this becomes tricky. Talking about the cornering ability of a car so pregnant with significance feels absurd, particularly a day after President Obama announced historic, strict new nationwide fuel-economy standards designed to prod along the production of hyper-efficient cars just like the Volt.

Nonetheless, this Monday, on the company’s Warren, Michigan Tech Center campus, a few other journalists and I were allowed behind the Volt’s highly contested wheel. Semi-retired GM product czar Bob Lutz was on hand to prep this test drive with a plea for perspective:

“I’d just like to remind members of the media at all times, dial yourself back about 27 months to the Detroit auto show of January 2007, when we showed the concept Volt and announced that we were exploring lithium-ion technology,” he said. Remember the scorn, the contempt, the instant criticism from “a famous automobile company that starts with a “T.” “Here we are two and a half years later and we are totally confident about the technology.”

Volt vehicle line executive Frank Weber provided further caveats. Don’t pay much attention to road noise and handling, because the next year and a half is all about dialing that stuff in. Don’t pay attention to the interior, because this car is, after all, a Chevy Cruze fitted with the Volt powertrain. This drive, he said, was about propulsion—about batteries and motors. “Public still has opinion that electric cars are handicapped,” he said. “We want to prove that it’s capable of being the first car in the household.”

Our test track was a busy corporate campus with a heavy presence of Canada geese and their goslings, so aggressive driving was pretty much out. Once I strapped in, I politely eased it around the campus as if circling a mall, looking for a parking spot. In this pre-prototype version, the road noise—a constant crunching and whining of the tires against the pavement—was surprisingly loud. Weber, who sat shotgun, assured me that he was not happy with the level of road noise, and that much of it would be hushed out over the next year and a half. 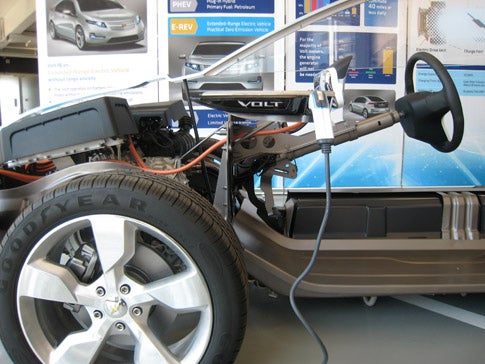 After a few laps around a campus lake, I realized what was so remarkable about the car: That once I forgot about the novelty of the silent electric drive, and once I stopped thinking about the hype and the controversy, the Volt seemed unremarkable. In a good way. A refined, nicely equipped version of this would be a real car—not a glorified golf-cart or a conventional vehicle clumsily retrofitted with a giant battery and an electric motor. The Volt mule reminded me of nothing so much as a silent version of a standard late-model Nice Sedan—a silent, gas-free version of, say, the Mazda 6 I test-drove earlier in the week. That’s a compliment: I like the Mazda 6. (The comparison also puts the moaning over the Volt’s projected $40,000 price in perspective. Subtract the $7,500 electric-car tax credit from Volt’s sticker price and suddenly you’re cross-shopping the Volt with an (admittedly heavily optioned) $32,790 Mazda 6 Grand Touring sedan.)

Once I grew bored with the respectful driving I asked Weber a leading question: “What else should I do with this before my time is up?” He supplied the answer I was looking for: “Go over by the lake and do some heavy acceleration.”

I stopped the car at the beginning of the longest stretch of road I could find, waited until it was clear of geese, and then floored it. As we rolled forward, quickly but not wildly, I couldn’t help but wonder: Where’s the tire squeal? Where’s the roar of the engine? But within a matter of seconds I was at 55 mph and out of road. I did it again, psychologically prepared for the lack of internal-combustion drama. It was exhilarating but anti-climactic. I want to know what it’s like to drive this silent ride at 100 mph, its electronically limited top speed.

Back in the garage, Weber and I stood behind the car and talked about the big picture. As Lutz had earlier, Weber confirmed that the Volt is still on track to for November 2010 production. It’s not clear how long after that you’ll be able to buy one. Actually, it’s not clear you’ll be able to “buy” one at all. According to Weber, the cars may be for lease, or they may be sold with certain incentive packages. This hasn’t been decided.

As everyone began to leave, I talked to Volt exec Tony Posawatz, who was grinning and bouncing on the balls of his heels as if it were his birthday. Like all the other GM-ers in attendance, he seemed to be blocking all thoughts of financial apocalypse. Actually, he was downright buoyant. Next week, the first of 75 production-intent prototypes was set to arrive. According to the Volt team, the things they can control are, in fact, under control.