We drove two new electric vehicles from BMW—the i4 and iX—and loved one of them. 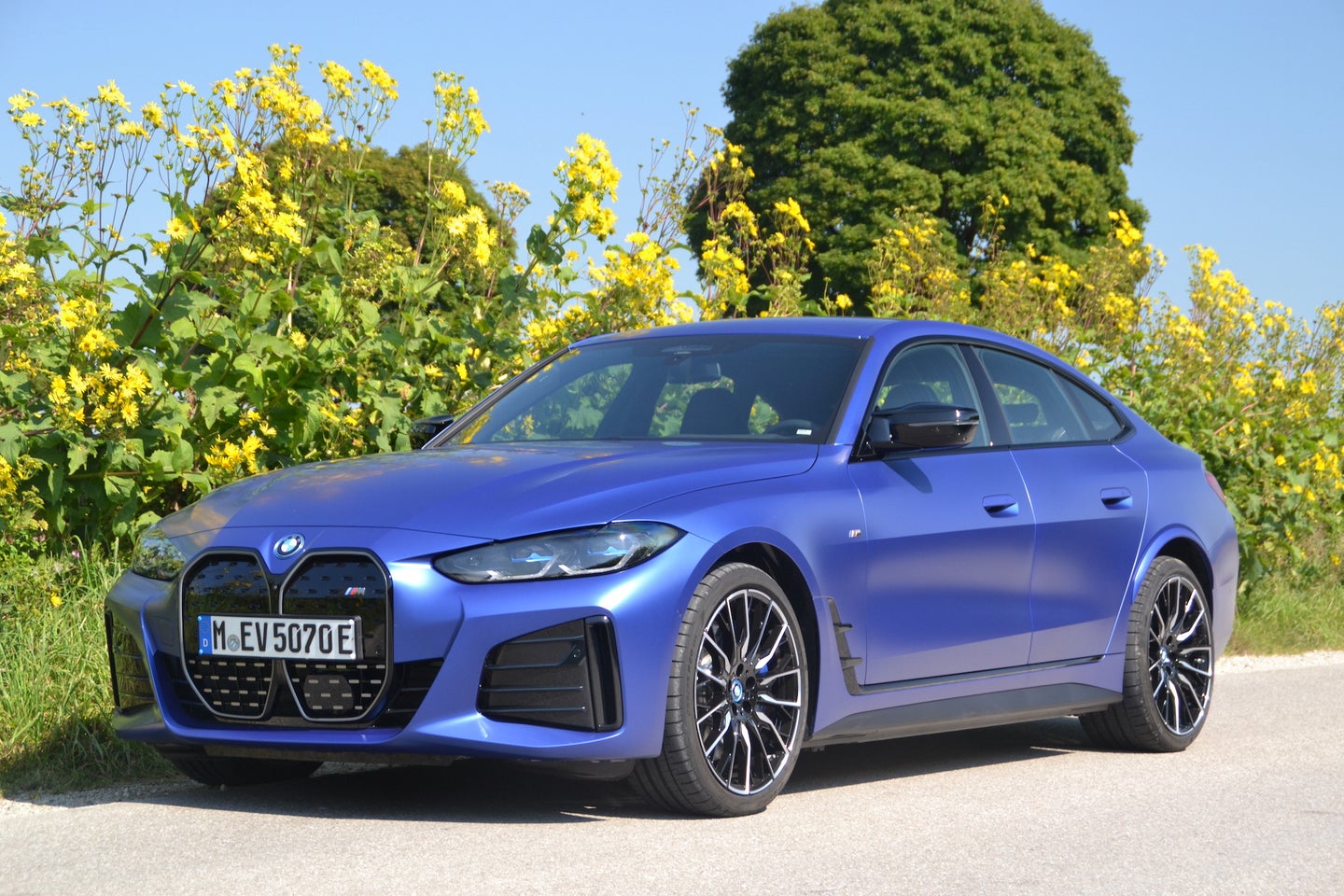 BMW has two new all-electric models that share most of the same underlying hardware, despite being very different products. The i4 is the new electric version of the compact or mid-size sport sedans that made BMW famous. Then there is the iX, which is BMW’s answer for the current sweet spot of the passenger car market—an all-electric mid-size crossover SUV.

The two models feature the same impressive new EV technology. But first, let’s talk about how they sound. To replace the familiar roar of Bavarian pistons, the company turned to a different flavor of Teutonic music in the form of sounds created by famed film soundtrack composer, Hans Zimmer.

BMW calls Zimmer’s creations “IconicSounds Electric.” Creating fake sound for drivers who are used to hearing something when they step on the “gas” sounds contrived, because it is. The i4 will include IconicSounds when it arrives at US dealers in the first quarter of 2022. The iX will not gain IconicSounds until after it arrives, also in early 2022.

But when you turn to a pro like Zimmer, whose mission in life has been to contrive sounds, the results are impressive. We shouldn’t have been surprised. His IconicSounds Electric will sooth the subliminal expectations of today’s drivers.

BMW drivers have the option of switching off the sound entirely. And thanks to over-the-air-software updates, Zimmer could easily provide additional sounds in the future for still more variety if customers want.

Besides the new soundtrack, here’s what else to know about these new electric vehicles.

While the world struggles with supply-chain challenges and China threatens to withhold the rare-earth metals that are used for the magnets in EV motors, some point out the human rights situation surrounding the mining of metals like neodymium.

For these new models and all EVs henceforth, BMW is steering clear of permanent magnets and the rare-earth metals contained therein. The i4 and iX employ induction in their motors to create electromagnets. Other carmakers say that induction motors don’t make enough torque. They say that the induced magnetic field is too hard to control efficiently.

With the i4 and the iX, BMW says “nonsense.” The company reports that the electric motors have an efficiency of 93 percent, and the i4 M50 we tested rockets to 60 mph in 3.7 seconds.

Batteries are always a key concern with EVs, and BMW is acknowledging a reality that leads to variations in automakers’ stated capacity for their batteries: Not all of a battery’s theoretical capacity is actually usable, because completely charging or depleting batteries shortens their life.

How much capacity is used depends on the manufacturer’s determination of the maximum available while preserving, in BMW’s case, the ability for the battery to retain 80 percent of its capacity after eight years of use. So, BMW provides two numbers to describe its cars’ battery capacity: the gross maximum amount and the net usable amount.

[Related: EVs are silent and soulless, so BMW tapped Hans Zimmer to give them a voice]

A bee in our bonnet

Both cars employ BMW’s new integrated braking system, which is similar in function to the one in the Acura NSX sports car. While most EVs and hybrids have to figure out how to blend braking from electrical regeneration with hydraulic brake pressure applied by the driver’s foot on the brake pedal, BMW’s integrated system forgoes the typical hydraulic cylinder connected to the brake pedal.

Instead, the brake pedal is spring-loaded, with sensors measuring travel and pressure. This information goes to the brake computer, and it doles out the right amount of braking using regeneration, friction brakes, or some combination of the two. With control of all these functions directly under control by the computer, the result is smoother and less noticeable than with most EVs.

This may not sound difficult, but the problem is that the amount of regenerative braking force available varies continuously, depending on the battery’s state of charge. A car with a fully charged battery cannot do regenerative braking because there is nowhere for those electrons to go. BMW’s integrated brake system takes the multiple variables into account and achieves that most elusive, and desirable, automotive trait: the ability to deliver the response that the driver intended.

The i4’s center of gravity is more than two inches lower than that of the 3-Series sedan, so even though it is heavier than its gas-fueled counterpart, the electric sedan feels just as nimble. The steering is accurate, which is reassuring after some BMW adventures with variable steering rates that could surprise the driver with its non-linear response.

And having huge amounts of electric torque powering all four wheels rockets the i4 out of turns like a plastic-swaddled sport bike. Everything about the i4 demonstrates completely that it is the all-electric Ultimate Driving Machine, exactly as BMW traditionalists demand.

On the other hand, there is the iX, a battery-electric crossover SUV with, ahem, daring styling and a stripped-down cabin that captures the Tesla design aesthetic that many EV buyers appreciate. Although the iX shares much of its underpinnings with the i4, and is only available in the all-wheel-drive version in the US, dynamically it is a relative from another planet.

The iX has the comfortable upright “command” driving position today’s crossover buyers seek and a cushy ride to complement the opulent silence of the drivetrain. The iX doesn’t have the Hans Zimmer IconicSounds Electric at launch, but that soundtrack will debut with a future sporty M model and will be available for regular iXs via an over-the-air software update.

We set the cruise control on 110 mph to devour kilometers on the German autobahn and the iX tracked straight and true as any German vehicle would be expected to, with no fuss.

The fuss arose when we stopped for a photograph on a narrow country lane. An approaching car prompted us to jump in quickly to zip out of the way. That was when we discovered 1) that a bee had gotten into the car and that 2) the iX’s power windows are insanely slow to open. BMW engineers insist that these windows are no slower than those of its other cars, but that because they are taller, they take longer to open. Still: absurdly slow.

The big difference between the i4 and the iX appeared on the curvy Bavarian mountain roads. Where the i4 is sporty and precise and responsive, the iX understeers miserably. It doesn’t like to change direction, and the front tires provide only minimal cooperation with any such requests.

Mountain switchbacks or flat land roundabouts—it doesn’t matter, turning the steering wheel is an exercise in frustration and disappointment as the iX plows ahead, its course little changed.

Mid-size crossover SUV buyers driving carpool will never notice this. They will notice the utter serenity of the iX’s cabin. All will be well with the intended drivers.

Meanwhile, BMW’s Ultimate Driving Machine traditionalists will gravitate toward the i4. Not just for its familiar three-box sport sedan profile (surprise: it is actually a hatchback, with plenty of practical space in the back!), but also for its more familiar driver interface, with a shifter that is similar to the one in a 3-Series.

And when the road turns twisty, as it did for us in the Alps outside Salzburg, the i4 is superlative. The car’s extra mass due to its battery pack is unnoticeable, while the resulting lower center of gravity contributes to the i4’s ability to slash through switchbacks like a dedicated sports car.

Meanwhile, the powerful electric drive puts the power to the road through all four wheels, launching the i4 out of corners as only electric drive can. With the ability to tune the car’s regenerative braking level to the driver’s liking, powering out of corners and then slowing for approaching hairpins is a one-pedal operation, letting the i4 dance effortlessly through the Bavarian switchbacks.

The only thing that could make the experience more perfect would be suitably Teutonic musical accompaniment. Oh, right, turn up the Hans Zimmer!