Aluminum couldn't hack it in this 1,500 horsepower monster. 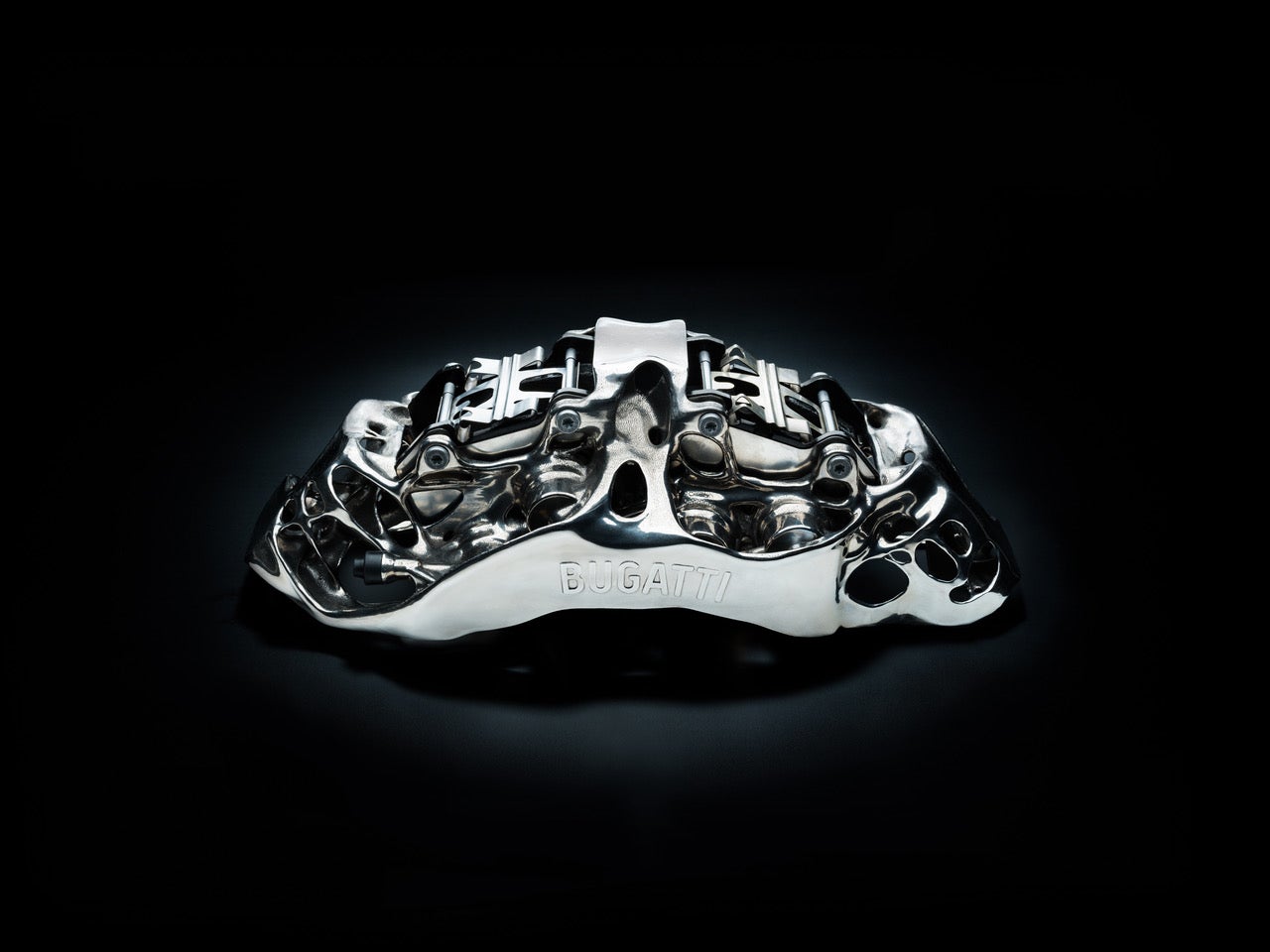 Stopping the $3 million, 1,500-horsepower, 16-cylinder, 4,500-lb. Bugatti Chiron from its mind-boggling 261-mph top speed requires locomotive-scale brakes. But big, heavy calipers hinder crucial performance characteristics like ride and handling, so Bugatti has pioneered development of a laser-sintered, 3-D-printed titanium component that will slash the weight of the Chiron’s monstrous brake calipers by 40 percent.

Each titanium caliper weighs just 6.4 lbs., compared to 10.8 lbs. for the current aluminum units and thanks to the stiffness properties of titanium, the lighter printed part is stronger. They are the world’s first brake calipers to be produced by 3-D printing and the largest functional titanium 3-D printed components.

The Chiron currently in production employs forged aluminum, eight-piston front calipers and six-piston rear calipers. The fronts are the largest brake calipers on any production car in the world.

Because of titanium’s extra strength, it is impossible to make titanium calipers using the same milling and forging techniques as employed for the aluminum parts. By switching to 3-D printing, it is possible to create very complex shapes that are lighter still.

The delicately shaped final part has wall thicknesses between 1mm and 4mm. This is possible in part due to the selection of the very high-grade aerospace titanium alloy, Ti6AI4V. It is mainly used for highly stressed aircraft undercarriage and wing components or in aircraft and rocket engines, according to Bugatti.

“In terms of volume, this is the largest functional component produced from titanium by additive manufacturing methods,” Frank Götzke, head of new technologies in the Technical Development Department of Bugatti Automobiles Engineering, development and prototyping of the first part took only three months. German additive manufacturing specialist Laser Zentrum Nord handled the production with what was the world’s largest titanium 3-D printer at the time. It is outfitted with four 400-watt lasers for melting 2,213 layers of the titanium powder over 45 hours.

Once the part emerges from the printer, Bugatti engineers heat-treat the caliper to 1,300 degrees F and gradually reduce the heat to 200 degrees, which eliminates residual stresses in the part and ensures dimensional stability.

Then they remove the brackets and braces that were printed in place as supporting structure. Finally, a five-axis milling machine grinds all the critical mating surfaces smooth over in an 11-hour process. The final product can endure 1,850-degree F temperatures according to brake dynamometer testing.

As a member company of the Volkswagen Group, Bugatti serves to pioneer technologies too costly for cars affordable by mere mortals, so even 3-D printed titanium can be expected to find its way into other applications.

“Everyone can and should benefit from our projects,” Götzke said. “This is also part of Bugatti’s role as the Group laboratory for high-tech applications.”

So maybe this technology will soon trickle down to VW Group brands like Bentley and Bugatti, but you probably shouldn’t expect to see any 3-D-printed titanium on your next VW Golf.