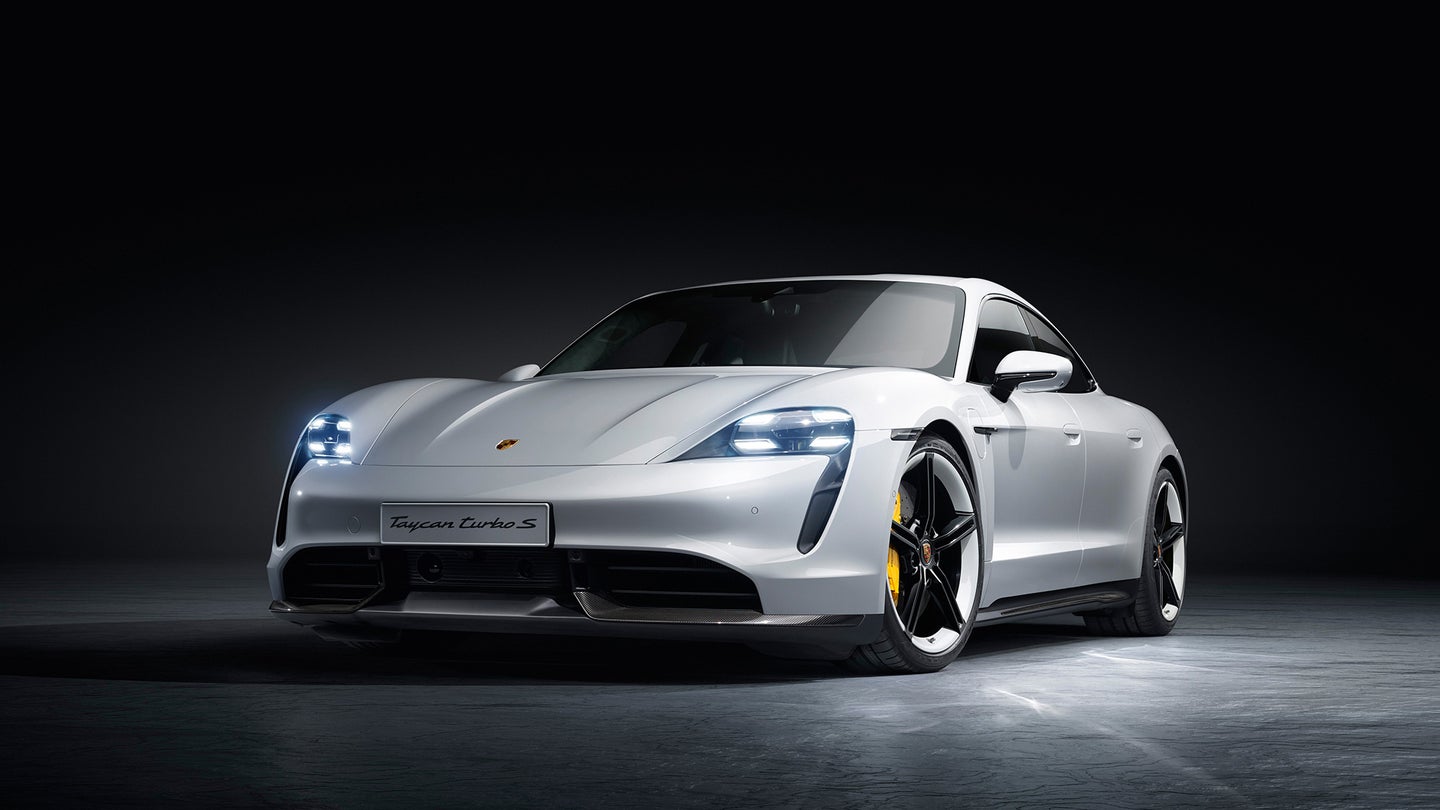 Just a decade ago, you could count on one hand the number of makes and models of electric vehicles on the market in the US. And until recently, the driving experience of most EVs left much to be desired. Today, nearly every major automaker either has a stable of electric models on their way to showrooms or at least in development. New players are entering the market too, with badges popping up around the world. Growing consumer demand for carbon-neutral options coupled with government incentives and a decrease in hardware costs is fueling (or rather, charging) a boom in the electric vehicle industry. And this time, going green doesn’t have to mean forgoing a soulful—or exhilarating—driving experience.

When Porsche set out to make its first fully electric vehicle, the Taycan, there was no question of compromising performance. The Stuttgart-based automaker’s engineers and designers leveraged the company’s long heritage of racetrack innovations to make the Taycan an electric vehicle like the world has never seen before. The result is a vehicle that isn’t just on par with the conventional Porsche vehicles that made the company famous—it’s in an entirely new league altogether.

“For most drivers, EVs will offer increased performance where it matters most in just about every aspect,” says Calvin Kim, Porsche’s Taycan spokesperson. “They have instant response, and provide torque from the very beginning. Due to the responsiveness of the motors, stability and traction control systems can also work much faster.”

Drivers will likely feel it first in the handling of the Taycan. One of the major challenges with electric vehicles is the weight and location of the battery. Porsche designers kept the center of gravity low in the Taycan by building the battery into the underbody of the vehicle as part of the load-bearing structure.

“From a handling perspective, having the battery pack located between the axles and low in the body ensures excellent weight distribution and the lowest center of gravity of any production Porsche,” says Kim.

It isn’t just the placement of the battery that sets the Taycan apart. Porsche opted for an 800-volt system as opposed to the standard 400-volt system found in most performance electric vehicles. Not only does the increased voltage improve charging time, it also reduces the weight and volume of the overall system. This makes for even further improved handling and performance. The decision to develop an 800-volt system was inspired by multiple wins on the racetrack at the 24 Hours of Le Mans with the Porsche 919 Hybrid, naturally.

Overall, electric vehicles, like the Taycan, are less complicated when it comes to their inner workings than their gas-powered counterparts. “In the traditional format, you must blend the different elements of the powertrain, such as the engine, transmission, and software controls all together,” explains Kim. “In an electric vehicle, this process is simpler.”

Reducing the number of moving parts that must work in order for the car to move from the moment the driver hits the gas pedal makes for a more efficient machine. Drivers have access to greater torque and thus improved acceleration off the line. However, Porsche wasn’t ready to settle with the rest of the electric pack. Where every other electric vehicle has a single speed transmission, Porsche developed the industry’s first two-speed electric transmission for the Taycan. The result is something the likes of which the auto world has never seen before—literally.

Housed in the rear axle of the Taycan, the two-speed transmission improves both the efficiency and the acceleration of the vehicle. In first gear, the Taycan gets a major boost in acceleration from a standing start—just shy of 12,000 newton meters of torque. The Taycan Turbo S has a recorded 0-60 mph time of just 2.6 seconds—talk about a rousing jump off the line. Once it reaches highway cruising speed, a quick shift into second gear improves efficiency for improved range.

Of course, what goes fast, must slow down. When you hit the brakes on traditional gas-powered vehicles, the kinetic energy is converted into heat. With electric vehicles, this energy is captured and fed it back into the battery instead of wasted. Porsche developed a new system of so-called regenerative braking that lives up to its performance ethos. The system utilizes forward motion, or coasts, until the brakes are engaged rather than capturing this energy for the battery right away. When the brakes are engaged, the Porsche system captures more energy than its competitors. The result is a system that not only feels like a true sports car, but is more efficient than the competition, too.

For many electric cars, the plug-in may be the defining feature. However, for the Taycan, it must be considered a Porsche above all else. From the lines of its ultra-aerodynamic body to the race-inspired engineering within the vehicle, the Taycan is the sports car of the next generation, carrying with it the heritage of the storied Stuttgart automaker. And it’s the first in what is surely a long line of performance electric vehicles from Porsche, as the company is set to invest more than six billion euros in electric mobility by 2022.

“Porsche regards its heritage as the main metric in which to determine what new models we should produce in the future,” adds Kim. “That means it must be fun to drive over anything else. It must inspire drivers to enjoy their car.”

While the Taycan is still a relative newcomer to the electric vehicle scene, expect to see more from Porsche in the near future. And expect those models to continue to push the limits of what’s possible with four wheels, regardless of what’s powering them.