The 2021 Ford Bronco lives up to its massive hype

The doors detach and stow in the back. It comes with free off-roading classes for owners. And so much more. 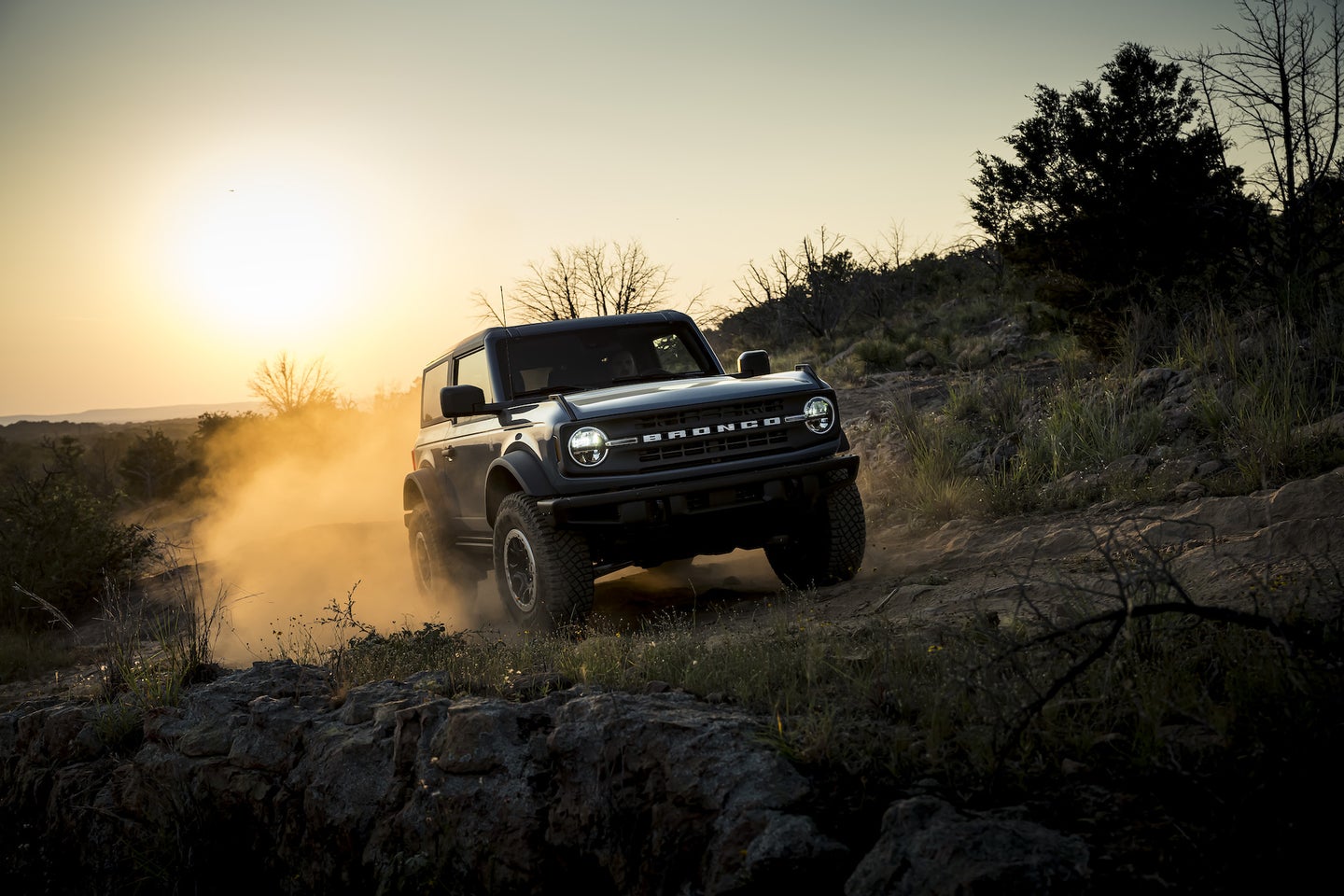 The question is shouted from a Ford enthusiast in the next lane who’s spotted my not-quite-available ride, the 2021 Ford Bronco. I was in the highly anticipated 4×4, unmissable in “race red,” and all I could do was tell him that it would be in dealers the following week. But as a lucky participant in Ford’s media introduction for the new off-roader, I didn’t have to wait.

This new vehicle recalls the first generation of the Bronco—an off-roader that famously rivals Jeep’s Wrangler—which was built between 1966 and 1977. The bigger, less-cool 1978-1994 edition was made infamous in the O.J. Simpson low-speed highway “chase,” but even that was so long ago as to relegate the Bronco to relic status.

So why the apparent mania for all things Bronco? Ford has 125,000 orders for this new rock crawler, and if you order one now in the most easily fulfilled configuration, the wait will be at least five months. If you fancy something fancy, it will be much longer.

Ford’s timing could not have been better for the Bronco’s release. Nostalgia for the original model has recently caused it to follow in the increasingly costly tracks of other gotta-have classics like the Acura Integra Type R and the ’69 Chevrolet Camaro. A shop called Velocity Restorations will sell you a better-than-new vintage Bronco for $225,000.

The 2021 Ford Bronco vs the Jeep Wrangler

Surely, challenging Jeep for its off-road crown is a fool’s errand, right? Jeep has been in the game since WWII, after all. The International Scout and Ford Bronco were legitimate challengers in the 1970s, but Jeep has been the uncontested 4×4 champion for decades.

Ford knows that Jeep has a huge lead. They just refuse to concede that it is an insurmountable one. So the engineers have worked overtime to build in the kind of features that will win both newcomers and Jeep die-hards.

Putting the mirrors on the fenders is no matter of just bolting them on somewhere else, according to chief designer Paul Wraith. It requires sorting out the sightlines from the driver’s seat and avoiding blockage by the windshield pillars, while ensuring that the housing and mirror glass have proper fit and that their mount is secure enough to prevent vibration. The Bronco’s mirrors are solidly mounted with reinforcing brackets beneath the fenders that make them strong enough to support attaching accessories like lights and cameras, Wraith explains. “Mirrors are freaking hard!” he says.

Once the doors are off, now what? Wrangler owners who have a garage can store them there. But young apartment dwellers are out of luck. Ford designed its doors so they can be stowed in the back of the Bronco, so any Bronco owner can enjoy the freedom of open-air doorless driving. The available protective nylon bags for those removed doors have a QR code that steers the Bronco driver to a video showing the procedure for packing them into the back of the vehicle.

During our off-road driving at Ford’s media introduction for the Bronco, we were reminded of just how much better the visibility out of the vehicle is with the doors off, and how much easier it is to climb in and out to check the terrain, shoot a photo, or spot for a buddy steering over an obstacle.

Vehicles that have removable doors aren’t required by the government to pass side-impact crash tests. But they are required to by Ford, so the Bronco has extra airbags to provide an acceptable level of side-impact crash protection.

Another airbag-related example of attention to detail: 4×4 owners like to dress their machines with a winch on the front that they can use to extract themselves from messy situations. But bolting a hefty electric motor to the front bumper changes the vehicle’s front impact characteristics. Buy the Warn winch offered for the Bronco and the dealer flashes in new software for the airbag system so that it responds correctly to the changed crash impulse profile.

SUV owners like to put things on the roof of their vehicles too. Throw a canoe or a kayak up there and you’ll want to secure the front. Normally that means running a tie-down to the front tow hooks and watching the nylon webbing saw away at the front edge of the hood while you drive. The Bronco has tie-down attachments atop each front fender, and they serve as corner-spotters for shorter drivers so they can better see where the Bronco ends and the tree begins when navigating trails.

Starting to notice how Ford is building Bronco’s case, piece by piece? They just keep piling on with the details. Do you like the Strava cycling app that lets you locate cool rides and compare your results? Bronco’s FordPass Performance App will point drivers to 1,000 curated trails where they can go four-wheeling. There are an additional quarter-million miles of uncurated trails too. With all of its cameras and sensors, the Bronco lets drivers post videos and telemetry from their drives online.

But what if you’ve always loved off-roading in concept, but don’t know the first thing about how to actually do it? Ford is opening a quartet of Bronco Off-Roadeo camps around the country and admission is free for every Bronco buyer. They can even attend before taking delivery of the Bronco. The Ford media drive was at the location outside Austin, Texas, but there will be others on the coasts too.

How about the actual off-roading? Yeah, Bronco’s strong there too. It has available industry-benchmark Dana front and rear differentials, and they lock. Significantly, the front can be locked whether or not the rear is locked, providing some added flexibility in situations where that’s the best approach. The Wrangler can’t do that.

Trail Turn Assist is a technology that lets the Bronco automatically lock the inside rear wheel’s brake when making tight turns on the trails. This pivots the vehicle in a 40-percent smaller turning radius, saving the driver from backing up to make a three-point turn when the trail is potentially scattered with obstacles to doing that.

The Bronco has an independent front suspension system so the left and right sides can operate separately from each other, as in cars and most SUVs. But off-road traditionalists are stuck on solid front axles like the Wrangler’s.

Ford says the independent setup is better and has numbers to prove its point. The Bronco has 10 inches of articulation between the two sides of the front suspension, which is more than Wrangler. It also has 12.6 inches of ground clearance, because the differential can be mounted higher when it isn’t part of a solid axle assembly. “We believe independent front suspension is better than a solid front axle,” declares chief engineer Eric Loeffler.

There’s no argument on the road, where the independent setup provides superior ride and handling. On some of the strenuous, rain-slicked trails where we tested the Bronco, we found Ford’s claims to be true, as the Bronco easily clambered over large rocks and reliably put the power to the ground.

Ford’s software wizards contribute their part too, ensuring the hardware is optimized for the conditions with seven different settings for the Terrain Management System that include Normal, Eco, Sport, Slippery and Sand,  Baja, Mud/Ruts, and Rock Crawl. These settings tailor the four-wheel drive, differential locks, traction control, and stability control systems to meet the conditions.

All of these amazing features and our incredible experience navigating the trails of the Texas Off-Roadeo put the Bronco solidly into sliced-bread territory. So here comes the “but.”

Both vehicles are powered, like most Fords, by versions of the brand’s signature turbocharged, direct-injected EcoBoost technology. Trouble is, it is heavy on “boost” and light on “eco,” and the Bronco has poor fuel efficiency for a mid-size, five-seat vehicle. The four-cylinder we drove has an EPA rating of 18 mpg in both city and highway driving.

Our 75 miles of mostly suburban and rural highway drive saw the Bronco get 16.7 mpg. The smoother, more powerful V6 has an EPA rating of 17 mpg, also both for city and highway. The numbers for comparable, but slightly less powerful, Wrangler models are 22/24 for a 2-door four-cylinder and 19/24 for a 4-door V6.

Ford has done so much so well that the 125,000 people who already have firm orders for a new Bronco will surely be thrilled as they enjoy its incredible capabilities and appreciate its thoughtful details. And the Bronco is designed to be modular, so it is not only easy to customize, but it will be easy for Ford to continually iterate exciting new variations as it has done with the Mustang over the years.

But the Bronco’s thirst at the pump is going to sting, so we have to hope that more efficient hybrid and electric versions are a sooner-rather-than-later thing. Judging from the popular reception of Ford’s planned battery-electric F-150 Lightning, it is probably safe to say that Blue Oval die-hards will be eager to check out both those electrified Broncos and today’s impressive gas model.